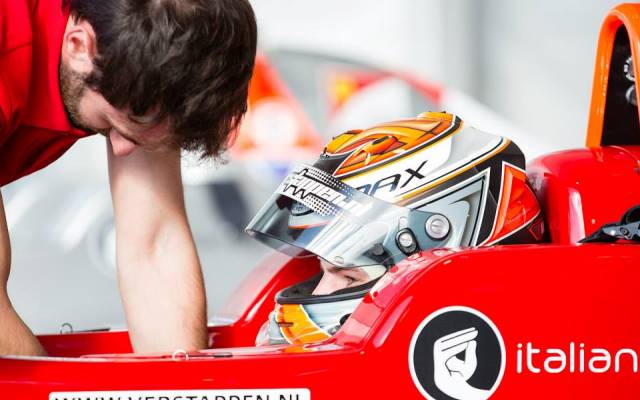 Starting from pole position, the Dutch teenager saw off the challenges of Antonio Fuoco and Ed Jones during the course of the race, which was red flagged with five minutes remaining as a heavy storm hit the circuit. The start of the race had been brought forward by 90 minutes to try to avoid the incoming weather.

Fuoco latched onto Verstappen’s tail during the early part of the race but then fell behind Jones. The F3 Open champion then also got close to Verstappen, but had to settle for second place.

Tatiana Calderon slipped to 11th on the first lap but set the fastest lap of the race as she recovered to finish sixth, ahead of Alex Bosak, Vasily Romanov and Takashi Kasai. GP2 commentator Will Buxton finished a lap down in tenth, just ahead of Raffaele Marciello, who ran fifth until slowing and making a visit to pit lane.

Nicholas Latifi went off out of sixth shortly before the red flag.