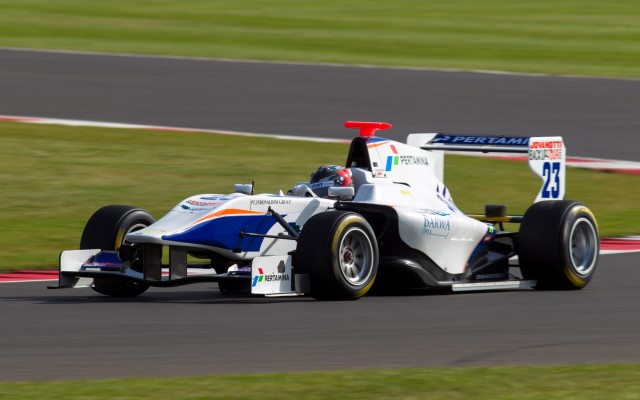 Giovanni Venturini prevented another home win at Silverstone, fending off Nick Yelloly to claim his maiden GP3 win after starting on the reverse grid pole position.

Yelloly got a fast start from third on the grid to get alongside Venturini at the Village right-hander and went around the outside of the Trident driver into the lead, only to run wide over the kerb on exit and allow Venturini back ahead.

Carlin driver Yelloly came back at Venturini in the closing stages, getting the gap down to 0.4 seconds, but couldn’t quite get close enough to pass.

“Finally we are here, after bad luck in Barcelona and Valencia,” said Venturini on the podium afterwards. “[Yelloly] was really fast and I pushed a lot to stay in P1, and in the end we are here so I’m happy and proud of the job of my team.”

In his podium, Yelloly said: “To do it here is probably the best place to do it for me. We did have the lead for a little bit but I just ran wide and he went back past. I think we were quite a bit faster but with the tyre deg we just couldn’t get close enough in the higher speed stuff, so I have to settle for second today.”

Alex Fontana slipped behind Yelloly at the start but then held third throughout to get his first GP3 podium. Daniil Kvyat finished fourth with the fastest lap on the last lap of the race, ahead of Facu Regalia and Tio Ellinas, who lost two spots on the first lap but still did enough with sixth to extend his points lead, finishing ahead of his nearest rivals.

Race one winner Jack Harvey made up a place to finish seventh, with Aaro Vainio also getting past Koiranen team-mate Kevin Korjus for the final point.