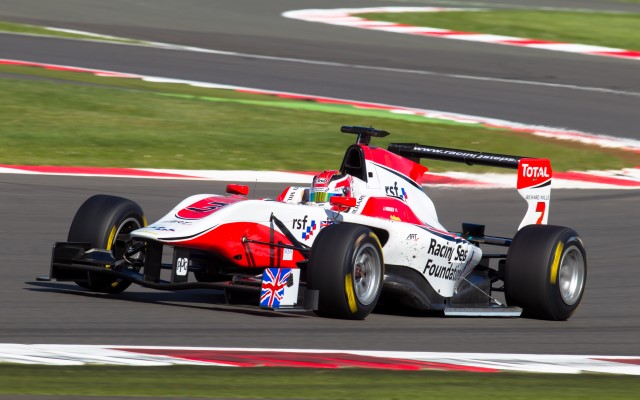 He opened up a good early lead over ART team-mate Conor Daly, who was then penalised for the jump start that took him from ninth to second by the first corner.

The safety car was out for a significant portion of the race after a huge accident for Patrick Kujala, who was launched over the back of David Fumanelli‘s car when the Italian got loose at Becketts and rolled through the gravel, but was seen out of the car, standing and talking with medical staff soon afterwards.

Daly served his drive-through at the restart, giving Harvey a good gap over Korjus which he extended to three seconds by the chequered flag. Facu Regalia scored his second podium in three races in third place.

Daniil Kvyat finished fourth ahead of championship leader Tio Ellinas and Nick Yelloly, who both found a way past Alex Fontana either side of the safety car period.

Lewis Williamson made incredible progress from 19th on the grid to make a brave move on Carlos Sainz for eighth at Maggotts. Sainz got back ahead though, and as Williamson tried to pass him on the Wellington Straight later that lap Sainz moved across to the left, banging wheels with Williamson and forcing him into a spin. Sainz sustained damage that dropped him down the order with Giovanni Venturini picking up the pieces of the reverse grid pole for Sunday. Adderly Fong and Dino Zamparelli completed the top ten.