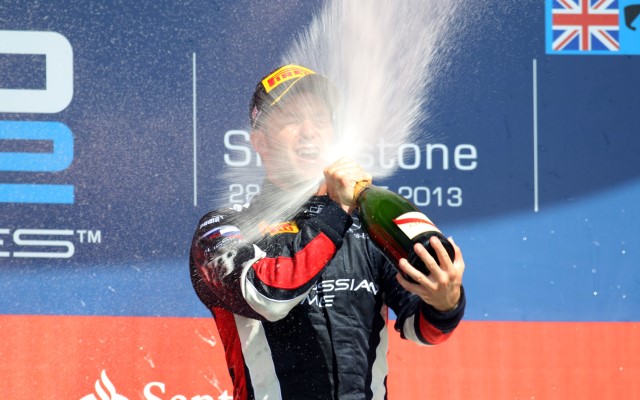 Sam Bird claimed victory on home soil in the GP2 feature race at Silverstone , taking advantage as points leaders Stefano Coletti and Felipe Nasr were both forced into retirement.

Bird actually made a slow getaway from second on the grid as pole-sitter Marcus Ericsson went off into the lead, chased by Nasr. The Brazilian got alongside the Swede into the right-hander entering the arena section but was then forced wide off-track by Ericsson. Bird meanwhile had been passed by Coletti for third, but took advantage of the mess ahead of him to pass all three down the inside at The Loop and take the lead.

Coletti took up second place until making an early pit-stop on lap six. Ericsson rejoined just ahead when he stopped a lap later, but Coletti passed him as the DAMS driver was handed a stop-go penalty for the first lap incident. Coletti was then able to chase down Bird as the Russian Time driver struggled to make his way past slower drivers that were going longer into the race before stopping.

Coletti however got stuck behind Johnny Cecotto, allowing the later-stopping Stephane Richelmi to close up behind him. Mitch Evans also stopped later and rejoined ahead of Cecotto, giving him virtual second place, but he was then given a penalty for speeding in the pit lane.

Richelmi made a superb dive down the inside of Coletti at Club to secure second place, and he managed to go after Bird and finish 2.4 seconds behind the Brit, who gave the home crowd more to cheer about aft

Bird’s team-mate Tom Dillmann was another late-stopper, and being on the faster medium tyre allowed him to charge up the order in the closing stages. First he passed Jolyon Palmer – who produced another overtaking masterclass after starting way back in 20th – and then Fabio Leimer. Third-placed Coletti provided a much tougher challenge, Dillmann managing to get alongside on more than one occasion but Coletti somehow holding on despite the lack of life left in his tyres. Eventually Coletti made a mistake at the end of the penultimate lap, running off the track and Club and letting Dillmann through for a well-deserved first podium of the season.

Leimer then took his chance to pass Coletti but locked up and ran into the Rapax driver at The Loop in doing so, forcing Coletti into retirement, the first time he hadn’t finished inside the top six this season. Fortunately for him, nearest rival Nasr had also retired, bringing his own remarkable run of top four finishes to an end.

Leimer did finish fourth but is under investigation for the incident, as is Jon Lancaster who made contact with James Calado at Brooklands that sent the latter off-track backwards. Palmer finished sixth ahead of Rio Haryanto and Julian Leal, with the top ten completed by Calado and Alexander Rossi, who is another under investigation for tipping Kevin Ceccon into a spin and out of the race at Club early on.