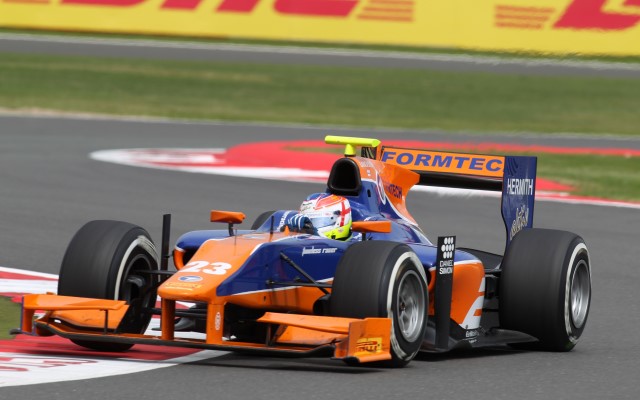 In only his fourth weekend of GP2 racing and his third this year, the British driver got an almighty launch from fourth on the grid to lead into the first corner.

His early advantage was wiped out by a safety car called on lap three but he was untroubled after the restart and took the chequered flag with a margin of 6.5 seconds.

“Before Barcelona it’s basically been over a year not driving, doing a little bit of stuff here or there but not racing so to come back at the third weekend, already had a podium and to win the first race at home, you can’t ask for any better really,” he explained on the podium.

Rio Haryanto held second place throughout to record his first podium in GP2. James Calado made a good start from eighth on the grid to get up into third place but lacked the pace to challenge Haryanto and instead had to sustain pressure from Julian Leal, who lost out after starting on pole.

Feature race winner Sam Bird got past his Russian Time team-mate Tom Dillmann late on to claim fifth, with Dillmann somehow holding on to sixth just ahead of Felipe Nasr, who charged from the back row of the grid. Marcus Ericsson took the final point in eighth ahead of Alexander Rossi, another to come from the back.

Stefano Coletti failed to score again in tenth but retains his points lead.