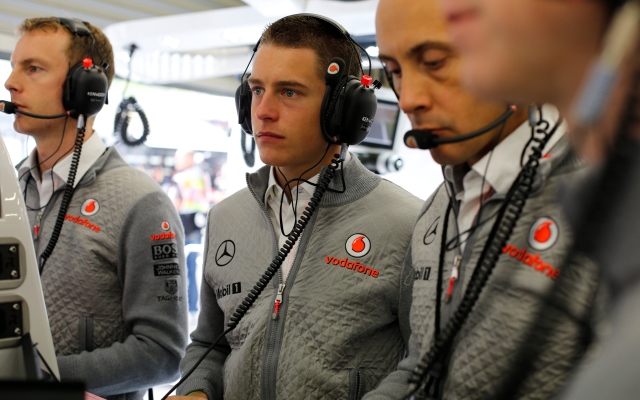 Stoffel Vandoorne will make his Formula 1 testing debut with McLaren next week in Bahrain.

The news was announced ahead of Vandoorne’s first GP2 race weekend by McLaren racing director Eric Boullier, who explained that the Belgian will do in-season testing this year alongside simulator work.

“It?ll be one of his prime duties this year,” said Boullier. “In fact he?ll be testing the McLaren MP4-29 here in Bahrain next week ? his first Formula 1 test ? and I?m sure he?ll acquit himself very well.”

Recruited to the Woking team’s young driver programme at the start of 2013, Vandoorne was made an official reserve driver for this season. Boullier said that he will not be filling that role in Bahrain while he concentrates on his GP2 campaign.

“He?ll be too busy racing in GP2 ? not one race but two ? and we want him to be able to focus on both those races without being distracted by his McLaren duties,” said Boullier. “So our reserve driver here in Bahrain will be Oliver [Turvey].

“We?re very fortunate at McLaren to have great strength in depth as far as test drivers are concerned ? don?t forget that in addition to Stoffel and Oliver we also have Gary [Paffett]. But Stoffel will be McLaren?s reserve driver for the Chinese Grand Prix, where there won?t be any GP2 races, and for many other 2014 grands prix besides.”

Speaking about Vandoorne’s GP2 chances, Boullier is cautiously optimistic that he can overcome the challenges faced by series rookies.

“Stoffel is a debutant GP2 driver, but he?s always succeeded in every race series he?s turned his hand to in the past, so I?m sure he?ll succeed in GP2 also. This time a year ago, for instance, he was a debutant World Series by Renault 3.5 driver, and he won his first race from pole position, at Monza, which was a massively impressive achievement for a rookie.

“I?m not saying he?ll do that again here in Bahrain in GP2; no, what I?m saying is that he?s a fast learner, which is what you need to be when you?re embarking on a new series.

“Specifically, this year, he?ll have to adapt to the characteristics of the Pirelli tyres. But Stoffel is technically minded, and methodical in his thinking, and he?s been working very hard with his team, ART, to get to grips with them.”

Formula Renault 3.5 driver Sergey Sirotkin will also make his debut in an official Formula 1 test with Sauber next week, driving on Tuesday 8th, the first of the two days of testing, in order to obtain his superlicence.

2012 FR3.5 champion Robin Frijns will appear in Friday practice for the first time with Caterham tomorrow, and then also take part in testing next week with the team.