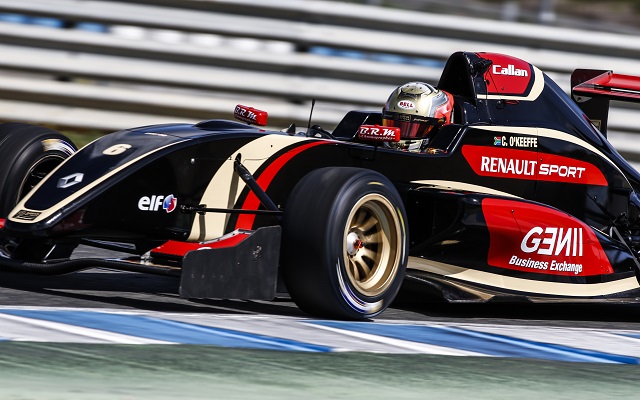 17-year-old O’Keeffe was a prominent karting driver in the early stages of his career before graduating to car racing in 2012 with Red Bull. He impressed in his debut single-seater season in the Formula BMW Talent Cup, taking four wins but ultimately only managing ninth in the Grand Final event.

For 2013 he was placed in German entry-level championship ADAC Formel Masters with Motopark. However, he had a difficult rookie season, taking 13th overall with his best result coming at the season opener at Oschersleben, where he took sixth.

Having been released by Red Bull, he did extensive testing with the ART Junior Team and is the second driver to be confirmed for the team alongside Levin Amweg, with Aurelien Panis expected to follow suit.

18-year-old Albon is another karting prodigy who made the switch to cars in 2012. He was also picked up by Red Bull in 2012, and was released after a disappointing rookie seaso, which saw him fail to score points in the competitive Eurocup series with EPIC Racing.

He joined Lotus F1’s junior squad for 2013 and continued in the Eurocup, switching to KTR. He took a maiden pole in the championship at Spielberg and led the entire race, only to lose his win to teammate Ignazio D’Agosto due to a time penalty for jumping the start. Having finished the year in 16th with 22 points, he went on to regularly feature among the frontrunners in testing during the off-season.

17-year-old Ramsay also made his full-time debut in single-seaters in 2012, racing with Swiss squad Jenzer in Formula Abarth. Finishing the season in eighth and with a career-first victory to go along with it, he joined Euronova in Alps for 2013 and finished that campaign in 19th.

The Scotsman tested with KTR throughout the majority of the off-season and was usually placed in the midfield.

The announcement of Albon and Ramsay leaves one empty seat at KTR, which is likely to be taken by French F4 runner-up Jules Gounon.