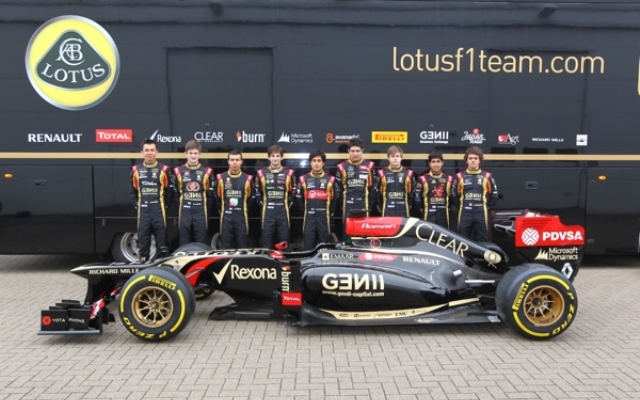 The Lotus F1 Team has announced its roster of junior drivers for 2014, with Callan O’Keeffe and Gregor Ramsay joining the setup.

O’Keeffe follows Alex Albon by signing with the Enstone squad having been let go by Red Bull. A former karting star, the South African competed in the Formula BMW Talent Cup in 2012 and then finished 13th in ADAC Formel Masters last season. This year he will race in Eurocup Formula Renault 2.0 with the ART Junior Team.

Scotsman Ramsay has competed in Formula Abarth and Formula Renault Alps for the past two years, finishing eighth and 19th in the two series respectively. In 2014 he will move up into the Eurocup, driving for KTR.

A third member of the nine-man Junior Team is a new arrival for 2014 – Ecuadorian-American karter Juan Manuel Correa, who last year became the Rotax Max Challege Grand Finals Junior Max Champion and will compete for the Energy Corse team in European and International events.

With Marco Sorensen having been promoted to a test driver role alongside continued participation in Formula Renault 3.5, the Junior Team is led this year by Marlon Stockinger. The Filipino will contest his second FR3.5 campaign with the Charouz-run, Lotus-branded team.

Albon continues for his third year in FR2.0, staying with KTR, while Dorian Boccolacci steps up from karts into the French F4 Championship.

“The future of our sport is reliant on new talent and the roster we have for this season has great potential. Romain Grosjean, Pastor Maldonado and Charles Pic have all benefitted from the young driver programme created in Enstone so it is obvious that this scheme can help these drivers attain the very best results. We will be supporting these drivers in every way we can and we wish all of them good luck for their racing seasons.?

Programme manager Gwen Lagrue added: “We are very excited to start our 2014 campaign with such a talented group of young drivers. They are the face of Enstone in their categories and we are proud to represent Lotus F1 Team all over Europe with our Juniors.

“It’s a long and hard process to build and prepare drivers but we strongly believe that we are more than ever ready to fight for the victory in each category this season and get the result of work and efforts done in the last three years.”