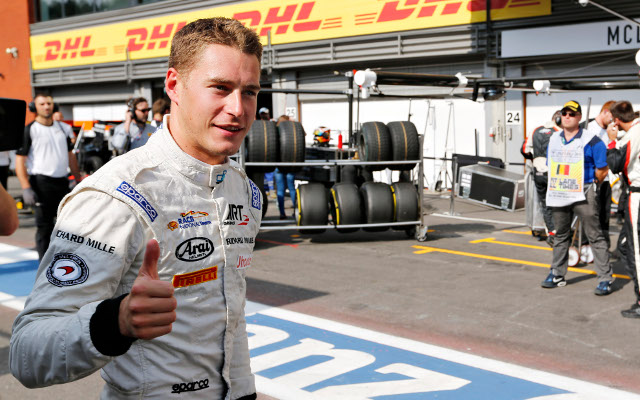 Stoffel Vandoorne delivered upon expectations to claim GP2 pole position on home soil at Spa-Francorchamps, with Oliver Rowland getting closest to him on just his second appearance in the series.

After setting the pace in practice, runaway standings leader Vandoorne went straight to the top of the times early in the session, with over four tenths in hand over the competition.

He immediately pitted, and returned to the track at the halfway stage as others were on their way in.

That gave him the entire circuit to himself for a second attempt at a flying lap, and he found time in all three sectors to improve to a 1m56.278s, 0.240s quicker than his previous benchmark and 0.659s clear of the opposition.

Vandoorne returned to the pits for the remainder of the session with his pole position looking secure, but he was quickly given a fright by Alexander Rossi improving upon his first-sector time by three tenths of a second.

The American driver lost time later in the lap however, and it was Sergey Sirotkin who got nearest to challenging Vandoorne, 0.235s down.

Formula Renault 3.5 leader Rowland had been closest to Vandoorne for much of the session, and after being pushed down the order as others improved on their second runs, the Briton then reclaimed second place.

He wound up just 0.147s adrift of Vandoorne, who returned to pole position after missing out at the previous two events.

Pierre Gasly took seventh, with Rossi down in eighth but still ahead of Hungaroring feature race winner Alex Lynn, who will have to make do with P9 alongside Norman Nato.

Rio Haryanto, the driver closest to Vandoorne in the standings, pulled himself up to 11th at the end of the session.