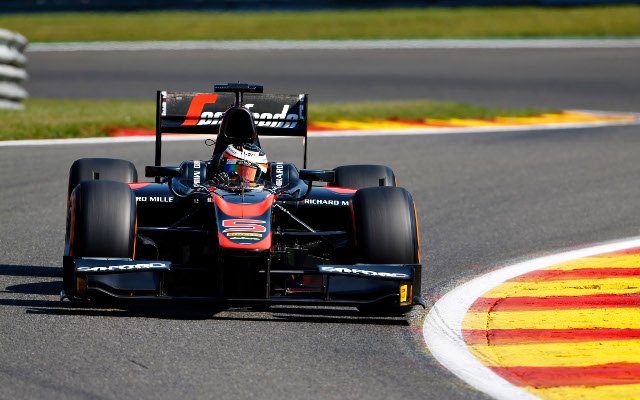 GP2 championship leader Stoffel Vandoorne got his home round at Spa-Francorchamps underway with the quickest time in free practice.

The McLaren junior hit the front early on, and remained on top with a time of 1m57.486s.

Mitch Evans hinted that his recent run of lacklustre form could be over with the second best time, 0.154 seconds behind Vandoorne.

The Briton has already replicated one part of that weekend by stopping on track at the end of the session again.

Pierre Gasly edged out Sergey Sirotkin for sixth place while Arthur Pic was eighth, but did spin into the barriers at the Turn 9 left-hander at the chequered flag.

After racing for Hilmer in Hungary, Sergio Canamasas is back at the Lazarus team he was with at Silverstone, reporting that he has secured a deal to replace Zoel Amberg (who has struggled with health problems over the last few months) for the rest of the season.

The Spaniard was 12th in practice behind Norman Nato.

The Hilmer team meanwhile has been unable to find an alternative driver to pair with regular Nick Yelloly, who was 22nd, one place behind Hungary sprint winner Nobuharu Matsushita.

Rio Haryanto, who currently holds second place in the standings ahead of Rossi, Sirotkin and Lynn, could only manage 17th.

Gustav Malja?s first session in a GP2 car lasted just 15 minutes. The Swedish FR3.5 regular, replacing an ill Rene Binder at Trident this weekend, spun at the final chicane and stalled, and although he got marshals to push his car towards the pit, he was left short of the entry and therefore unable to get restarted and ended up last of the 25 drivers.

His team-mate Marciello later came to a halt after exiting the pit lane, but managed to roll into the secondary pits and return to action.

Which of these junior racers will be Formula 1 drivers in 2016?