Vandoorne on GP2 pole again ahead of Lynn in Barcelona 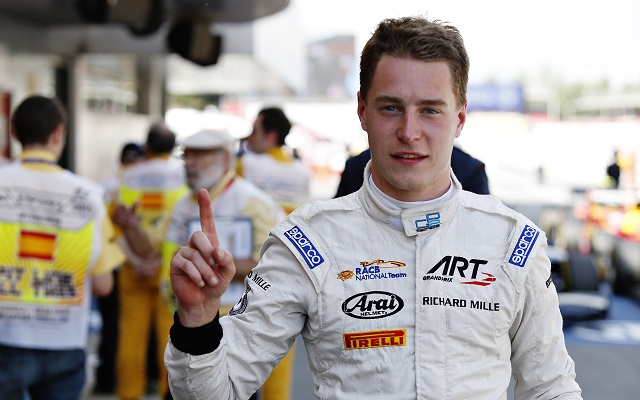 Stoffel Vandoorne stretched his streak of GP2 pole positions to six as he topped qualifying for round two in Barcelona by four tenths of a second from Alex Lynn.

After an early red flag triggered by Artem Markelov‘s car stopping at Turn 4, the Belgian was the first driver to record a flying lap. That initial effort was good enough to remain the benchmark through the middle of the session, a tenth ahead of Lynn.

With three minutes remaining, Vandoorne’s second run produced a string of purple sectors to move more than six tenths of a second clear and make sure of his sixth consecutive pole position – he hasn’t been beaten in a qualifying session since Hungary last July.

Lynn was able to improve his time soon afterwards and although he fell 0.407s short of pole, the GP3 champion was able to better his third-place in qualifying in Bahrain.

DAMS missed out a third straight pole in Barcelona but took second and third with Lynn and Pierre Gasly, the Frenchman moving up from 13th on his second run.

After completing the top three behind Vandoorne in practice, Mitch Evans and Alexander Rossi found themselves relegated behind the DAMS drivers in qualifying.

Daniel De Jong improved towards the end to claim his best ever qualifying result of sixth ahead of Ferrari protege Raffaele Marciello and Bahrain sprint race winner Rio Haryanto.

Series debutant Nick Yelloly delivered a fine ninth place in Hilmer’s return to action after skipping Bahrain due to a lack of available drivers with funds. Julian Leal completed the top ten.