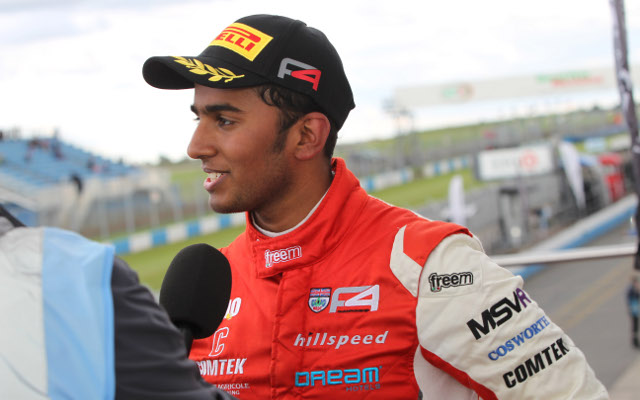 Ameya Vaidyanathan will follow up his double podium in BRDC Formula 4 at Donington with a debut in Formula Renault 2.0 at the Nurburgring NEC round this weekend.

The Indian racer, who is already dovetailing campaigns in BRDC F4 and MSA Formula in his first ever season of racing, will join MGR Motorsport alongside its regular driver, Colin Noble.

A week earlier, he scored his best finish yet in MSA Formula at Rockingham, with 10th in race two.

?Ameya began testing with the team recently in the Formula Renault and we saw some immediate improvements with his driving and results in the UK,? said MGR team boss Mark Godwin

?Whilst we have sensible expectations for the coming weekend, we are confident that Ameya will make a good impression and hopefully enjoy his first experience of racing a Formula Renault [and] outside the UK.

?2015 has been a really good year so far for both the team and driver Colin Noble and recent pace has shown we are now capable of running consistently at the front, with Colin now 11th in the championship.?

Other changes to the entry list for the Nurburgring include Stefan Riener listed with Fortec Motorsports rather than being alongside Dan Ticktum and Bruno Baptista at Koiranen, after all three joined the series for the Spa round in July.

Fortec are without Callan O?Keeffe (currently fourth in the standings) and Ferdinand Habsburg, who had both entered all five previous NEC rounds.

The Finnish PositiOne Motorsport team is set for its first appearance of the year running Mikko Perttala, 36, and Harri Salminen, 47, who made previous starts in 2011 and 2014 respectively.