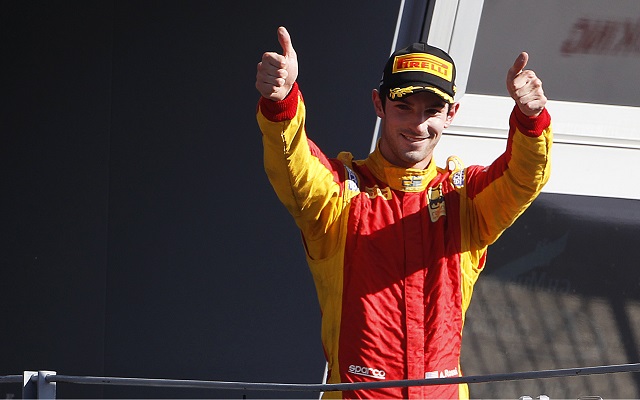 Alexander Rossi will make his long-awaited Formula 1 race debut with the Manor team in Singapore in a deal to do five of the remaining 2015 grands prix, in parallel to the final three GP2 rounds.

Rossi, who sits second in the GP2 standings after recent wins at Spa and Monza, will take the place of Roberto Merhi, who joined the team on an initially short-term basis at the start of the year.

23-year-old American Rossi came close a debut for the team, then known as Marussia, on several occasions last year, getting announced for Spa before Max Chilton resolved contractual issues, while as reserve driver he was in line to take over the other car following Jules Bianchi’s accident in Japan but the team fell into administration.

Rossi will see out his GP2 commitments with Racing Engineering in Sochi and Abu Dhabi, where Merhi will return to the Manor fold, as well as the non-F1-supporting Bahrain round.

“He is widely-regarded as a driver who is on the cusp of an exciting F1 career and his current form in the GP2 series has done much to reinforce his clear potential.

“With that in mind, we are pleased to support his current GP2 commitments while he continues to battle for the championship win, therefore he will race in five of the seven remaining grands prix this season, with Roberto contesting Russia and Abu Dhabi for us.

“While Roberto is obviously disappointed, he understands that this decision is in the long-term interests of the team and we thank him for his professionalism.

“No decision has been made regarding our 2016 driver line-up and we will continue to evaluate our options during the remainder of the season.”

Rossi said: “I?m very thankful to race for the Manor Marussia F1 team and for their continued belief in me. I?ve been prepared for this opportunity for quite a while now.

“Many will know from 2014 that the team and I already have a strong relationship and there?s a bit of unfinished business for me here.

?I want to thank the management at Manor Marussia F1 Team and my team in the GP2 Series, Racing Engineering, for supporting both my F1 duties and the completion of an already strong GP2 campaign.

“Since Monza, my return to F1 came together rather quickly and seamlessly. The collective support of both Manor and Racing Engineering was instrumental in making this opportunity possible.?