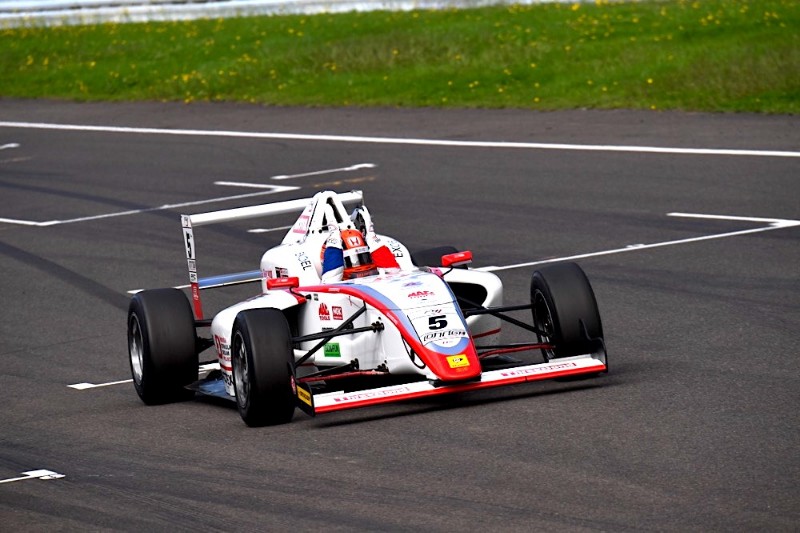 The first of the two races took place in damp conditions, with Tsunoda taking pole and holding off Natori in the opening laps. Other drivers were finding the conditions more difficult, and when a spun car got in the way of Tsunoda, he ended up losing the lead to Natori and then second place to Le Beausset Motorsports’ Kohta Kawaai.

With conditions being too difficult to overtake in, Tsunoda spent the rest of the race unable to get back past the top two.

Ren Sato, the third of the four HFDP drivers, started on the dry tyre and was quicker than anyone by the second half of the race. On lap 4 he had been 11th, but picked off drivers lap after lap, and he took the lead with three laps to go. He pulled out a remarkable 19 seconds over Natori before the checquered flag, but passes at corners where yellow flags were being waved meant he was handed a 37-second penalty and dropped to 10th in the results.

Natori, Kawaai and Tsunoda filled the podium as a result, with Kawaai’s team-mate Shota Ogura finishing fourth and TOM’S driver Kazuto Kotaka fifth. Takuya Otaki took sixth for HFDP in a photo finish with Mizuki Ishizaka of Bionic Jack Racing, with the pair being seperated by 0.001 seconds. Yuichi Sasaki won the Independent class in 19th.

Tsunoda took his eighth pole of the season in qualifying for the second race, and escaped instantly at the start. He pulled out a gap of two seconds on the first lap, and extended that to 7.614s by the end of the 15 lap race. Natori and Kawaai started and finished second and third.

Shinji Sawada struggled in the first race, finishing 16th, but was far stronger in the second and initially kept pace with Natori and Kawaai. The gap between the three of them started to increase as the race went on,? and Media Do Kageyama Racing driver Sawada had to with fourth, his best result since the opening round of the season.

Ogura narrowly beat Kotaka to fifth, knocking the latter out of title contention. Ishizaka, Sato, Suganami and Ogawa rounded out the points.

The Independent class was much closer this time, with Team Right Way’s Keizi Nakao heading Rn-sports’ Masayuki Ueda, who now has a 17 point championship lead over Nakao.