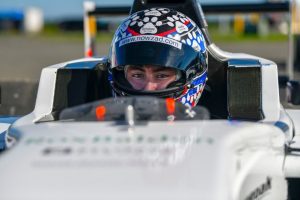 After several rounds of the championship lead changing hands, DC Autorsport with Cape Motorsports driver Dickerson put himself firmly ahead with his second and third wins of the season, which were enough for him to build a points lead that would be insurmountable at the Circuit of the Americas season finale.

It was British rookie Teddy Wilson who took pole though, just 0.015 seconds ahead of Austin Kaszuba. Dickerson came in third, ahead of Jose Blanco-Chock and Arthur Leist.

Dickerson moved up to second at the start behind Wilson, with Kaszuba heading down the order after a pitstop. It was Blanco-Chock who was the fastest driver though, and he moved past the top two in the first few laps. Wilson also succumbed to Dickerson, who hounded Blanco-Chock all the way to the chequered flag.

The Puerto Rican took his third win of the season for?Crosslink Racing with Kiwi Motorsport, with team-mate Leist completing the podium not far behind Dickerson. DEForce Racing’s James Raven rose from ninth on the grid to finish fourth. It was an impressive climb up the order but nothing compared to Kent Vaccaro, who took his Momentum Motorsports car from 12th to fifth, taking fastest lap on the way, in his best performance of the season.

That meant he started the second race from pole, with Dickerson alongside him on the front row. Joshua Car and Wilson were directly behind them.

Dickerson took the lead with ease, and his chances of wrapping up the title increased when rival Benjamin Pedersen collided with Kaszuba and caused a caution period. At the restart Vaccaro attacked Dickerson, but ending up going off the track through the first two corners and causing another caution.

The leader sprinted away at the second restart, with Car occupying second place. He was moved out of the podium places by Raven and Blanco-Chock, who had no answer to Dickerson. Car sank to seventh, with Wilson, Conrad Clark and Leist also getting past him.

Fastest lap for Raven meant he started the final race from pole, and although he held off Dickerson off the line, it didn’t make much for the championship leader to get past. Raven also came under attack from Wilson, but held off until a caution period was called for an off by Blanco-Chock.

At the restart Wilson snatched second, but an incident at the back of the pack meant the cars had to wait to get back to racing speeds again. On the second restart Dickerson was bettered by Wilson at Turn 3, but reclaimed the lead four corners later. He spent the rest of the race in Dickerson’s mirrors, and they ended the race 0.810s apart. Car took third place from Raven late on, ensuring Dickerson the 2018 title.