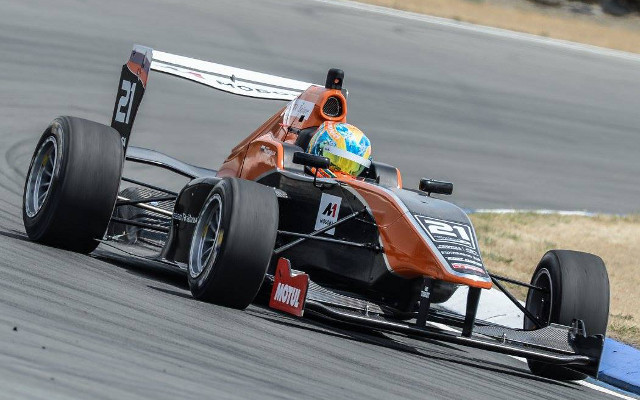 Each year, the PaddockScout season begins just a couple of weeks into January thanks to the Toyota Racing Series in New Zealand. Since the first season in 2005, the series has evolved from an entirely domestic affair that spawned Porsche sportscar ace Brendon Hartley and into a popular destination for international racers chasing some winter race mileage.

Early overseas visitors included Edoardo Piscopo, later the two Wills Stevens and Buller in 2009. The influx of tourists really took hold from 2010 to 2013, at the same time as local stars Mitch Evans and Nick Cassidy were notching up back-to-back titles to kick start their international ambitions.

Sten Pentus and Lucas Foresti were race winners in 2010, and the talent moved up a notch a year later with Alex Lynn and Daniil Kvyat both victorious from a field that had six international racers. Next time – with the series now condensed down into a tourist-friendly format of five rounds in five weeks – that number became 15. This included the likes of Raffaele Marciello, Nathanael Berthon, Lucas Auer, Felix Serralles and Jordan King, as well as the now-retired Josh Hill and Hannes van Asseldonk. Lynn returned in 2013 and together with Auer, ran Cassidy close for the title.

For 2014, the Ferrari Driver Academy saw an opportunity to tap into this emerging market and set up the Florida Winter Series. This attracted many big names, and although season ten of the TRS still had as heavy an international flavour as before, it lacked any truly high profile drivers. Jann Mardenborough was the only driver with experience of F3 or above, and his backers Nissan could only shout so much about him racking up his first single-seater victories in a Toyota-powered car…

Still, there were some very promising youngsters out there, with Egor Orudzhev and Martin Rump shining early on. And the series produced its first ever international champion, with the lesser-fancied Andrew Tang beating his fellow second-year driver Mardenborough to the crown.

However, the apparent success of the first FWS and the prospect of an FIA F3 winter tournament in the Middle East threatened to weaken the TRS talent pool in coming years. But those two series have fallen by the wayside – for now at least – and with TRS introducing a brand new car from top single-seater make Tatuus, a superb grid has been compiled for the 2015 edition that begins at Ruapuna this weekend.

Of course, a decent budget is needed to add a winter campaign – particularly when seats are in demand – but the vast majority of drivers taking part have got something on their CV that marks them out. Drivers have been attracted from across the single-seater spectrum, from the first ever active GP2 competitor to visit the series, several arriving from F3/GP3 level, numerous junior-level racers and a couple of top-line karters. 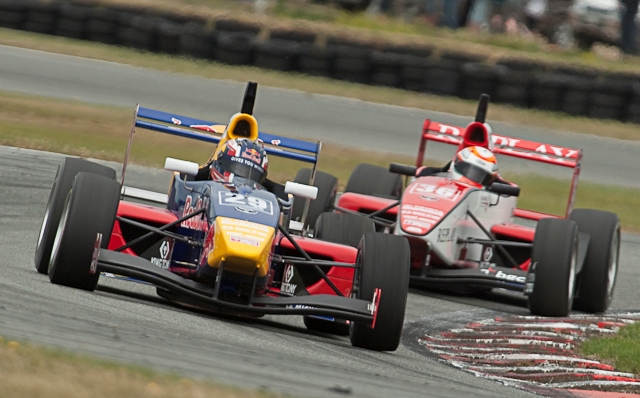 Artem Markelov is the driver from highest up the ladder to compete this year, visiting TRS before embarking on his second season of GP2. He’s one of three Russians on the 2015 entry list, bringing the total number of drivers from the country to have raced in the series up to nine. But there’s a more likely reason for his participation than just nationality, in the form of his Russian Time team-mate Mitch Evans, who will no doubt be on hand to advise the 20-year-old.

His rookie GP2 season might not have delivered much in terms of results, but it was a big step up from the German national scene, where he had done well. The potential is there to run at the front in future seasons, so he’s worth keeping an eye on. It will be interesting to see how he stacks up in TRS against those from lesser categories.

Markelov is part of a very strong six-car Giles Motorsport line-up. Four of the other five cars will be occupied by drivers who raced at F3 level in 2014. American whizz-kid Santino Ferrucci was able to begin racing in F3 once he turned 16 at the end of May and made a pretty immediate impact in the European series, notching up top-five finishes in just his second weekend. He added wins in a one-off in the British series and eighth on his Macau debut, and is poised to race for top team Mucke Motorsport in 2015.

Another sampling F3 around the world was Briton Sam MacLeod. A veteran of just one year of Formula Renault, he was the man to beat in British F3 when he was present, but his main focus was on the German series, where he was also a multiple race-winner. He’s another likely to be a full-time fixture in the European championship this coming year.

Mexican Alfonso Celis continued his rapid introduction to the European scene with a full campaign in GP3, as well as appearances in F3 and Formula Renault 3.5. He only scored points once in GP3, but last week he became the first driver signed up for the 2015 season by securing a deal with fancied squad ART.

Perhaps the most highly-rated driver in the field is over at rival squad M2 Competition. It’s a surprise to see a Ferrari presence back in the TRS, but Lance Stroll has opted to head to New Zealand for his pre-season preparations ahead of his step up to the FIA F3 European Championship. Last year he stormed to the Italian F4 title in his first season out of karts before he even turned 16 in October. TRS will offer him an opportunity to go up against some more seasoned competition in readiness for the big F3 jump. 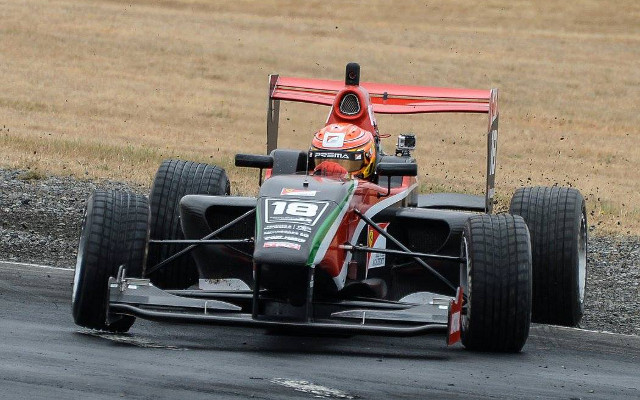 Stroll will use TRS as F3 preparation

Stroll is joined by his Italian F4 team-mate and ex-FDA member Brandon Maisano, who also seems set to accompany him in Prema’s F3 line-up for the coming season. Previously a Formula Abarth champion and Italian F3 frontrunner, the 21-year-old Frenchman is definitely no slouch and has the experience to boot.

While drivers from New Zealand and Australia have become a minority against the international influx, the modern TRS offers them a great opportunity to prove themselves to European teams against highly-rated opposition.

Leading the four Kiwis this year may well be James Munro, who finished seventh in the 2014 standings at his first attempt. Then, he was the local Formula Ford champion, and now he’s added the Formula Masters China Series crown. Now chasing an F3 seat in Europe, Munro is sure to be a frontrunner in the 2015 TRS and has joined Giles Motorsport as he aims to win the title back for New Zealand.

Highest-placed of the locals last year was Damon Leitch in P3. He once again lines up with the Victory Motor Racing team for his fifth straight year in TRS, and his experience should keep him at the sharp end even with the change of car. For the second year in a row he’s joined by his younger brother Brendon Leitch, aiming to improve upon 16th.

Munro’s heir as NZ FFord champion Jamie Conroy lines up with M2 Competition, and his predecessor’s results since make him worth watching. Really, the same can be said for his Australian counterpart Thomas Randle at ETEC Motorsport.

The remaining Giles car will be shared by two drivers with F3 experience in 2014. Dzhon Simonyan – another of the Russians – was a podium finisher in the Euroformula Open series. In his #7 car for the final two rounds will be Brazilian Sergio Sette Camara, who appeared in European F3 at Imola. Both drivers work with Brazilian racer/coach Roberto Streit, who has previously advised Bruno Bonifacio and Pipo Derani in TRS.

At M2 there are two drivers coming out of the BRDC F4 Championship. Arjun Maini – initially discovered by Force India and now mentored by Karun Chandhok – had a stunning first season in Europe, almost stealing the title from his much-fancied team-mate George Russell. He now looks set to join the Briton stepping up to European F3 this year, and has topped both TRS test days this week. 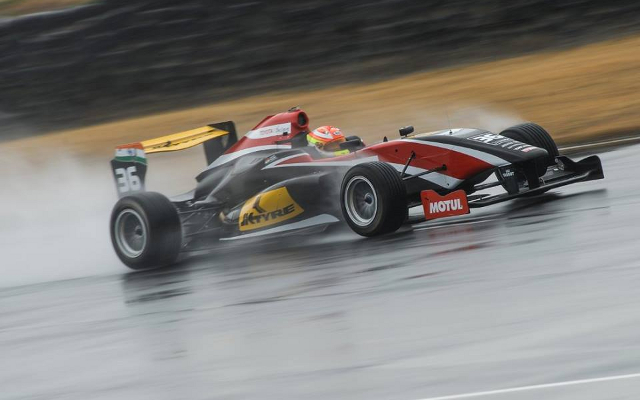 Maini has set the pace ahead of the opener

Charlie Eastwood has strong karting pedigree and although much of his first car racing season was tough, he ended the year with podiums to finish up in the top ten and seems likely to do Formula Renault in Europe this year.

Completing the M2 sextet is the relatively unknown Dane Mathias Kristensen. In 2014, he finished third in his native Formula Ford series. Given that series also began the careers of Kevin Magnussen and the Sorensen brothers Marco and Lasse (who finished first, third and fifth in their respective rookie seasons, for the purposes of comparison) he’s not to be ignored.

The Leitch brothers are joined at Victory by a pair of Austrians. Ferdinand Habsburg finished fourth in Formula Renault 1.6 in Europe last year in his rookie car racing season, and a step up to FR2.0 is likely for 2015. Part of Austrian-Hungarian royalty, he’s rated by Alex Wurz and supported in New Zealand by his mother’s Scottish cousin, who happens to be GT champion Jamie Campbell-Walter.

Stefan Riener meanwhile has raced in a number of championships in the past couple of years, and got podiums in ADAC Formel Masters in 2013 and Formula Renault 2.0 Alps in 2014. He’s already committed to a full Alps campaign with top team Koiranen in 2015.

Matteo Ferrer returns for a second crack at TRS, this time with ETEC. He should be able to improve upon an eventful first attempt following a strong sophomore year in Protyre Formula Renault in the UK in 2014, where he was often the closest guy to dominant team-mate Pietro Fittipaldi.

Completing the 21 drivers competing in this year’s TRS are two karting gradates Callum Ilott and Nikita Mazepin, both at ETEC and both with big reputations.

Briton Ilott won the CIK-FIA European Championship and the WSK Super Master Series last year at the end of a very successful karting career, and has been testing extensively ahead of an expected leap up to European F3 with Carlin. His rival Alessio Lorandi has already committed to doing the same, with the duo following in the footsteps of one Max Verstappen. Ilott particularly so, given he’s using a Red Bull helmet in New Zealand…

Russian Mazepin’s karting career wasn’t as high profile, but he did take second in the 2014 World Championship. He’s already contested races in the MRF Challenge and AsiaCup Series at the end of 2014 ahead of his first full car racing season, which will come in FR2.0 NEC. Just like Stroll, he has the combination of some on-track promise and a billionaire father that makes him worth tracking from the off.

The last karting graduate of their standing to have a go at TRS was Dennis Olsen two years ago, and although the Norwegian found it tough at first, he was in the top five before the end of the campaign. Ilott and Mazepin are likely to have more car mileage under their belts than he did, so could well top that. 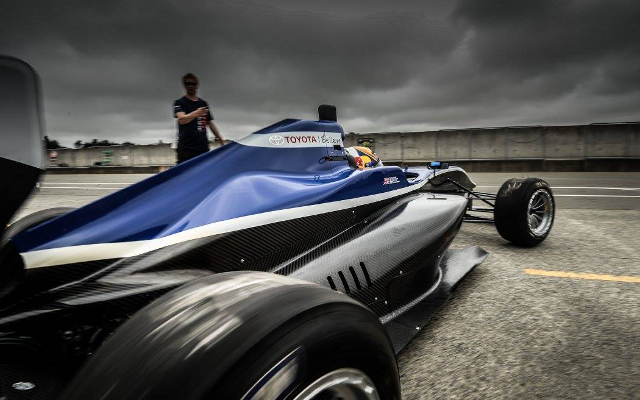