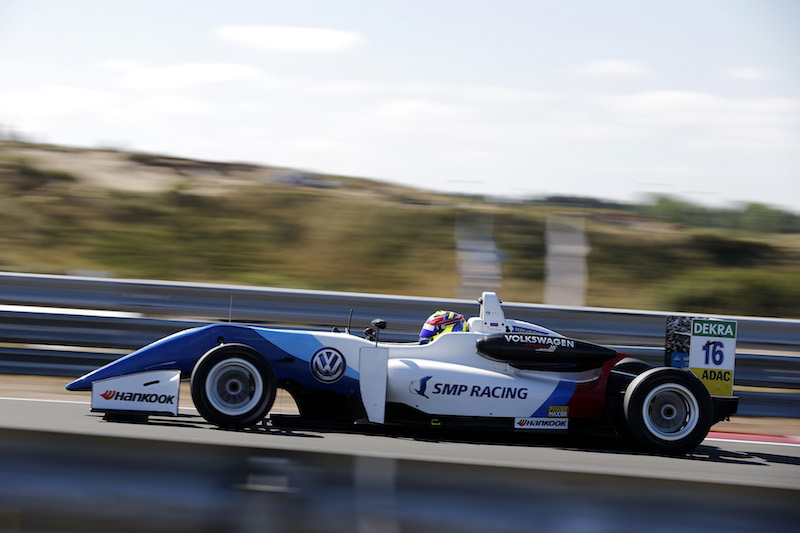 Carlin’s Nikita Troitskiy claimed his maiden win in the Formula 3 European Championship after the final race at Zandvoort was red flagged with five minutes left to run.

Troitskiy inherited the lead from Motopark’s Dan Ticktum, who was given a drive-through penalty for a jump start which bumped him to the back of the grid and led to an early retirement.

SMP-supported Troitskiy, who had previously not finished higher than ninth in European F3, started third on the grid as a result of a mixed-up qualifying session.

He took second at the start after he moved past Ticktum’s team-mate Juri Vips, who was awfully slow off the line and fell down the order.

The safety car came out in the second half of the race after?ma-con’s?Julian Hanses went through the gravel trap and hit the barrier at Turn 12.

With the extraction of the car by marshals taking a long time, and one of the recovery vehicles having trouble with the gravel trap, the race was ended with five minutes to go.

Prema’s Guan Yu Zhou was the only driver in the top four of the championship standings to finish in the points in second place, his third podium finish of the weekend at Zandvoort putting him one point off series leader Marcus Armstrong.

Team-mates Ralf Aron and Armstrong started outside of the top 10 and weren’t able to make their way through the grid to the points scoring positions.

Troitskiy’s?Carlin team-mate Jehan Daruvala finished in third place, his joint best finish in 2018 after podiums at Norisring and Pau.

The Motopark trio of Marino Sato and Fabio Scherer finished their?race in fourth and fifth respectively. The result is Sato’s best this season so far.

Enaam Ahmed battled through the race after enduring a difficult weekend. He was able to make a position on Sebastian Fernandez in the opening 10 minutes, and while he wasn’t able to get around Van Amersfoort’s Artem Petrov before the race was ended, he scored one point in 10th place.

Ahead of Petrov in ninth was Hitech’s Alex Palou in sixth, Ferdinand Habsburg (Carlin) is seventh and Jonathan Aberdein (Motopark) in eighth.