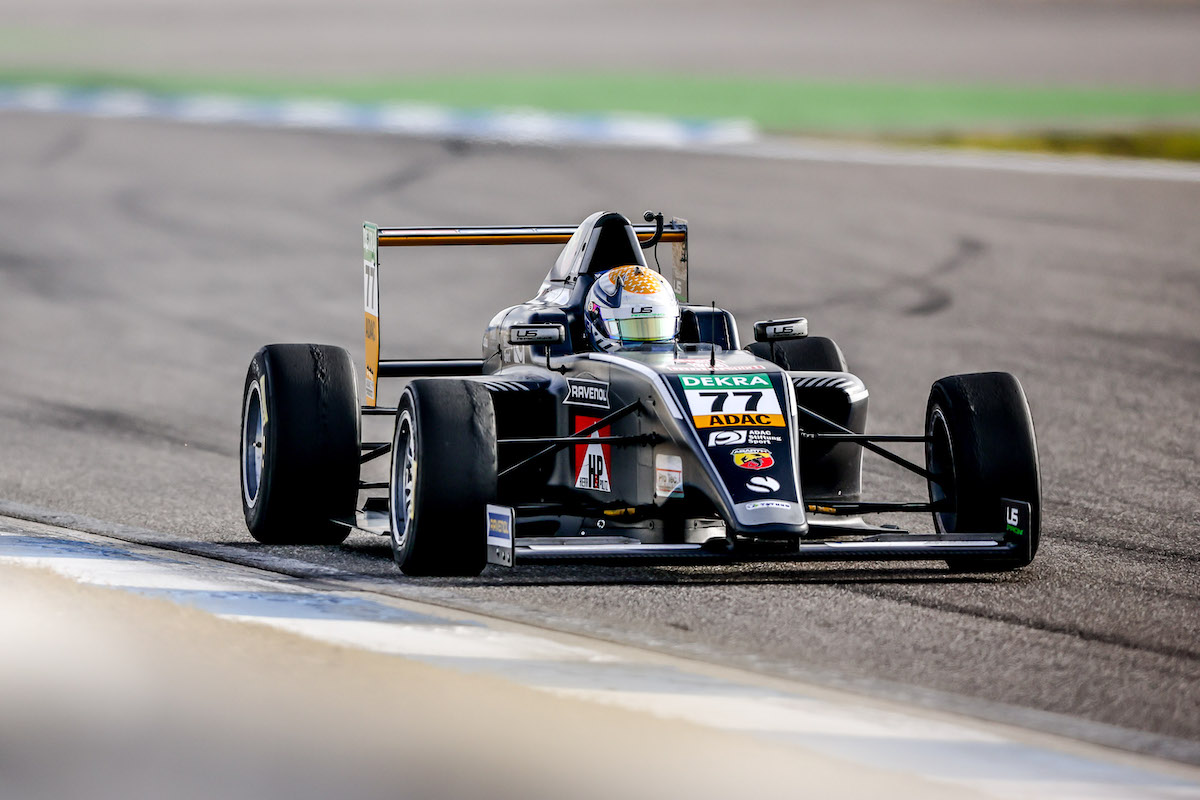 Tim Tramnitz took victory in race one of the final round of the ADAC Formula 4 championship at the Nurburgring after he and title rival Ollie Bearman clashed for the third round in succession.

Bearman charged back through the field to fifth from last after a coming-together with Tramnitz on lap one had necessitated an early pit stop to change his damaged front wing.

In a repeat of the incident at the Sachsenring, poleman Tramnitz (US Racing) chopped across the faster-starting Bearman (Van Amersfoort Racing), almost pushing his rival into the pit wall on the run down to turn one. However, this time Bearman kept his foot down, and managed to take the lead into the corner, despite locking up his tyres under braking.

Tramnitz, however, had better momentum on the exit of the corner with both running extremely wide onto the tarmac run-off through the AMG Arena before Tramnitz dived to the inside into the right hander exiting the complex to take the lead.

As the two fought for position, Bearman damaged his front wing, forcing him into the pits at the end of lap one, rejoining half a lap behind the field. The stewards determined that no further action would be required.

Bearman had the chance to latch onto the back of the field when the safety car was deployed after US Racing’s Luke Browning appeared to make contact with Victor Bernier (R-ace GP) as he challenged for fourth, and with his front wing lodged under the car was powerless to avoid the turn one gravel trap.

He made short work of the backmarkers to move up to tenth, before passing the R-ace GP duo of Marcus Amand and Sami Meguetounif on lap 12 to move up to eighth, quickly joining the battle for fifth between Bernier and Bearman’s VAR team-mates, Nikita Bedrin and Robert de Haan.

Bernier had been forceful in his defence of the position with both he and Bedrin taking to the pit lane entry at one point. Having dispensed of both VAR cars, Bearman braked late to take fifth from Bernier into turn one on the last lap.

However, a mistake exiting the AMG Arena allowed Bernier to regain the position. Bearman was unwilling to give up, trying both sides into the final chicane on the final tour. A defending Bernier lost momentum on exit allowing Bearman to retake fifth on acceleration to the final corner.

The order at the front had stabilised after the first lap, with Tramnitz seemingly untroubled by the following Vlad Lomko (also US Racing) and Joshua Dufek for VAR. Once Dufek found a way past Lomko he was quickly onto the tail of Tramnitz but had to settle for second place, 0.59 seconds behind the winner, with Lomko in third.

Alex Dunne took fourth for US Racing, just 0.3s behind Lomko, having enjoyed a spirited fight with Bernier in the early stages.

Just 0.56s separated Bearman, Bernier, Bedrin and de Haan as they crossed the line, Bernier and Bedrin finishing side-by-side after their heated duel in the closing laps.

Tramnitz’s win closes the points gap to Bearman to only eight points ahead of the final two races of the season on Sunday.