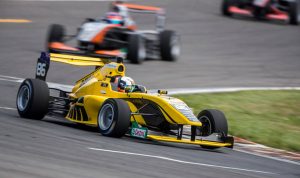 Victory Motor Racing driver Brendon Leitch continued his record of winning at least one Toyota Racing Series race every season since 2015 by triumphing with a dominant display in the second race at Taupo.

Starting on pole in the partially reversed grid, Leitch led from start to finish and was unchallenged throughout the race. He finished more than 15 seconds ahead of Ryan Yardley, who took his first podium in single-seaters since the 2014-15 New Zealand Formula Ford season after starting from the front row of the grid.

Championship leader Marcus Armstrong had hoped to pass Yardley at the start of the race, having started directly behind the MTEC Motorsport driver. Moving to overtake Yardley, Armstrong left the door open, allowing Richard Verschoor to dive past into third.

Verschoor was unable to challenge Yardley for the runner-up position and settled for third, ahead of title rivals and M2 Competition team-mates Armstrong and Robert Shwartzman.

The duo took up their season long battle once again behind Verschoor, before a stunning move from Taylor Cockerton allowed him to split the two Ferrari juniors. Cockerton then put pressure on Armstrong, but eventually fell away from the championship leader.

Cockerton finished sixth ahead of Reid Harker and James Pull.

The real battle of the race happened at the back of the top 10 again, with race one winner Juan Manuel Correa fighting to keep championship rival Clement Novalak behind him. Novalak, who could only manage 10th in race one, couldn?t find a way past Correa. A second 10th place of the weekend means he has now dropped behind Pull in standings.

There was drama late in the race as Cameron Das was sent into a spin after contact with Charles Milesi. Both drivers were able to continue, though Milesi was forced to pit with damage to his front wing.