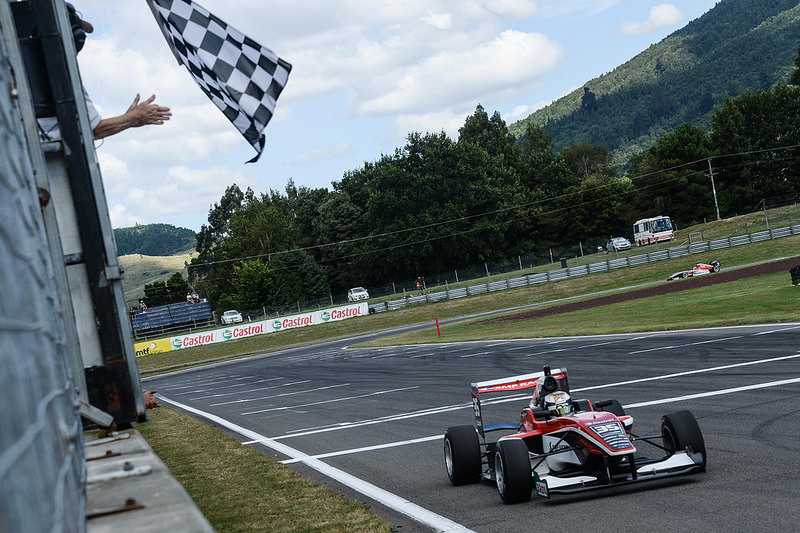 Robert Shwartzman boosted his Toyota Racing Series title chances going into the final round with his first win in the series at Taupo.

The 18-year-old claimed a lights to flag victory in the final race of the weekend, picking up the Denny Hulme Memorial Trophy and closing the gap to championship leader Marcus Armstrong.

After a stunning lap to take pole in qualifying, Shwartzman made a good start to stay ahead of Armstrong.

He set about building a gap to his team-mate, but a safety car and red flag early in the race bunched up the field again.

Clement Novalak had completed a weekend to forget at Taupo by running into the back of James Pull whilst battling in the lower half of the top 10. The Giles Motorsport driver briefly went airborne and his broken car was sent skidding into the grass bank, bringing out the red flag.

Pull?s car was checked over as the field came to a halt, but the team and officials deemed there hadn?t been significant damage and he continued on the restart.

Shwartzman controlled the restart perfectly and was left unchallenged for the rest of the race, finishing five seconds ahead of Armstrong in second.

Juan Manuel Correa put pressure on Richard Verschoor for the final step on the podium, but Verschoor defended well to take a hat-trick of third place finishes from the round.

An impressive start put race two winner Brendon Leitch fifth when the red flags were brought out. He?d built up a gap to the battling Pull and Novalak, but the restart put Pull back on his tail and the M2 Competition driver was determined to get past.

The pair touched wheels as Pull tried to make a move, sending him wide over the grass. He returned to the track ahead of Leitch but gave up the position and found himself under pressure from Cameron Das.

Das continued to challenge to the chequered flag, making his move on the final corner of the race to pull alongside Pull on the start finish straight. He just edged ahead of Pull to finish sixth, his best result of the season.

Pull claimed seventh, ahead of Charles Milesi and Ryan Yardley. Taylor Cockerton rounded out the top 10.