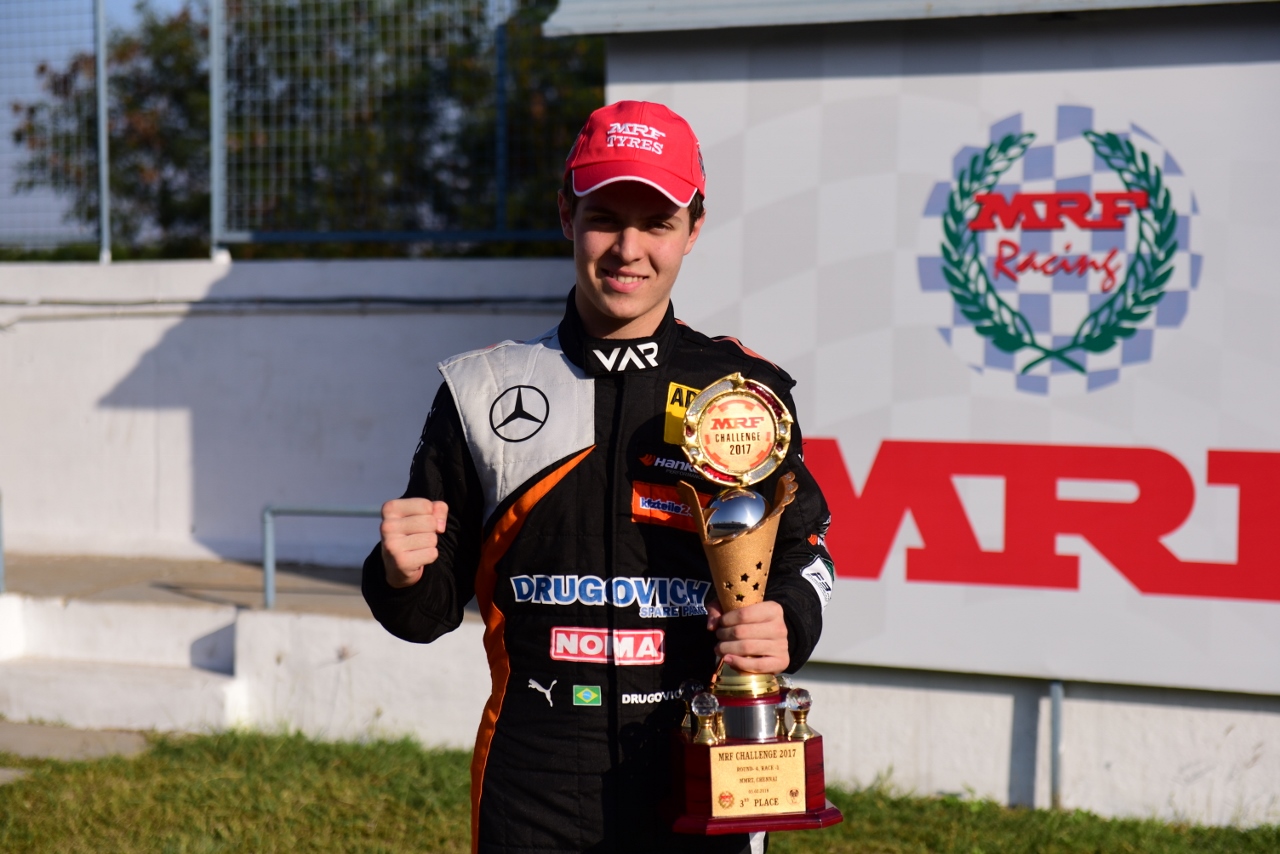 The Brazilian came into the weekend with a 86-point lead in the standings, and could afford to give away five points to title rival Presley Martono in the first race and still secure the title.

He did just that to become champion-elect, and finished sixth in the second race to guarantee the title was his.

Martono started on pole in the first race, gaining him two crucial points in the process, and made a strong start off the line. Drugovich wasted his front row start with a poor getaway, allowing VeeKay, who said prior to the race he just wanted to get through the first corner in one piece, to sweep past him around the outside at Turn 1.

Such was VeeKay’s pace that he was able to look at the lead at Turn 2, and when Martono made a small mistake he gladly took first place a corner later.

This put Martono into the clutches of Drugovich, who immediately started defending in the knowledge that losing the position would all but end his title hopes immediately.

VeeKay therefore had an easy run to victory, and his lead margin was already 1.3 seconds by the end of the first lap. He extended it to almost six-and-a-half seconds, setting several fastest laps on the way, to take his third win of the season.

Martono did hold on to second, helped by an error by Drugovich at Turn 1 around halfway through the race, and once he had been given breathing room he was generally faster than the champion-elect. The Indonesian’s race was lost at the beginning, and he admitted after the race that he “really struggled in the first few laps”, before his pace picked up in the later half of the 20 lap race.

Frenchman Louis Gachot would likely have slotted in between those drivers, but instead he was the only non-finisher after his engine cut out and was then handed a black flag for failing to take a drive-through penalty for a jumped start.

The top six were reversed to form the grid for the second race, meaning Karkosik would start from pole. Drugovich was set to start fourth, but was handed a 10-place grid penalty for finishing the first race without the minimum amount of fuel. This normally results in disqualification, but the stewards deemed such a punishment too draconian considering it would have meant Drugovich would have to fight for the title for at least a race longer.

This meant the battle at the front of the field was for second in the standings, with 14 points seperating Martono, VeeKay and Falchero going into the race.

It took two attempts to get that battle going, as the race was red flagged after one lap.

An out-of-control?Perdana Putra Minang drove into Pavan Ravishankar at Turn 2, who then collected Manuel Maldonado. All three cars were out of the race, and then three corners later another was added to that number when leader Karkosik went off on his own accord.

Julien Falchero also failed to make it to the end of the lap after being pitched into the barriers, at which point the organisers decided to red flag the race.

The restarted fixture didn’t include any of the five cars that crashed, meaning Frost led the field away, once he had reversed into the correct grid slot.

He controlled the first half of the race, before a gear selecting issue on lap 10 of 15 led to him overevving the car and sliding it across the grass. He dropped to third as a result, where he remained for the rest of the race.

Martono inherited the lead, and with VeeKay having to avoid Frost as he re-entered the track, the Indonesian had a comfortable lead that he carried to the flag.

Jones finished fourth, ahead of fellow Australian Young and champion Drugovich, who hounded Young for most of the race after rising from 14th.

Gachot finished an even more remarkable seventh from 18th on the grid, although did technically start on the second attempt in 13th, with Amendola, Robert Megennis and Enqvist rounding out the points.

There is now a 39-point gap between second placed Martono and fourth placed Falchero in the standings, with 54 available from the remaining two races.