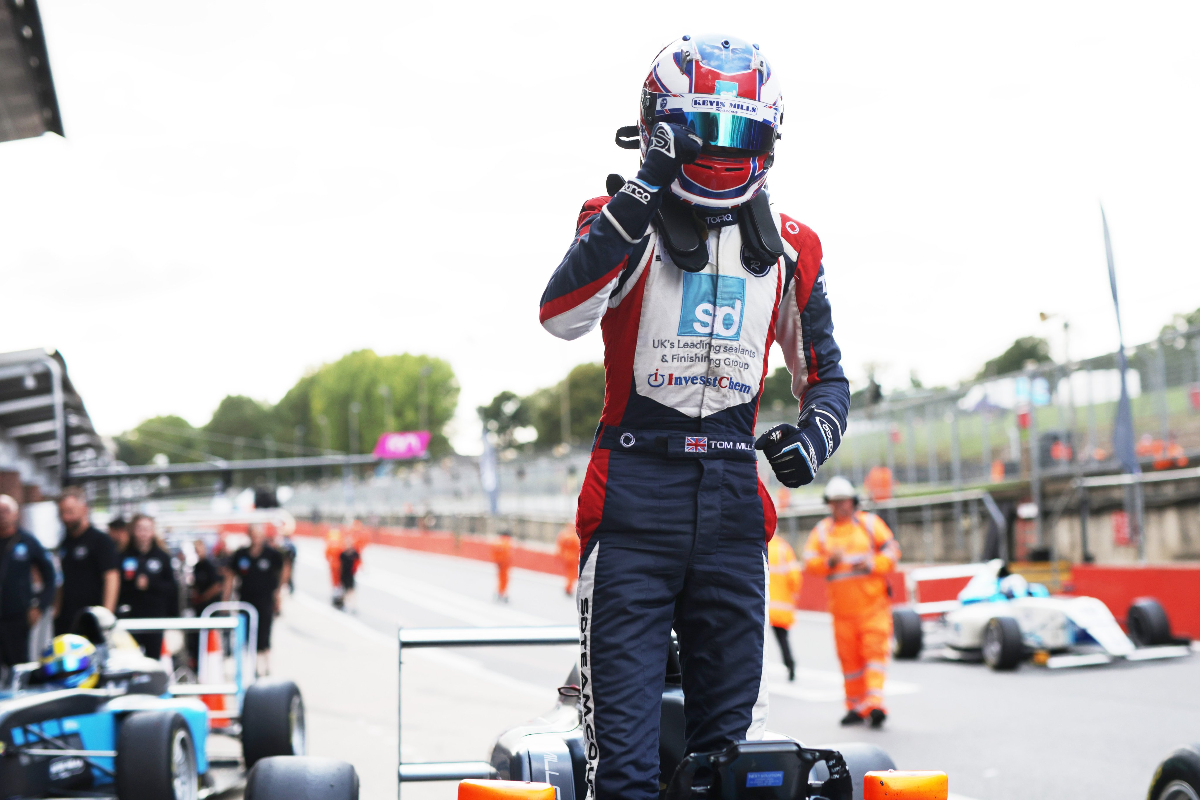 Kevin Mills Racing’s Tom Mills came out on top in a three-way fight to win a wild opening GB4 contest at Brands Hatch after Nikolas Taylor crashed out of the lead.

Mills led home Jack Sherwood and Jarrod Waberski, having pulled off a spectacular double overtake on the pair on the penultimate lap.

There was an extra formation lap before the start when the green flags were waved before the final car had taken its place on the grid.

KMR’s Waberski made the better start from the outside of the front row when the action got underway, but Taylor managed to hold onto the lead through Paddock Hill Bend and Druids.

Hillspeed’s Max Marzorati made a similarly good launch to take third away from Mills, who then retook the place into Paddock on lap two, with Elite Motorsport’s Sherwood following him through into fourth.

Taylor pulled out a one-second lead at the front but was dramatically caught out when rain arrived at Paddock Hill, sliding through the gravel and striking the barriers.

The safety car was deployed, with all drivers remaining out on slicks as the rain shower passed.

A thrilling final three laps followed when the safety car was withdrawn. Sherwood spent the first of those laps putting intense pressure on Mills for second.

Having taken the position on the next tour on the outside of Paddock Hill, Sherwood almost immediately snatched the lead from Waberski with another outside move at Graham Hill Bend.

A mistake at the next corner from Sherwood allowed Waberski to move back ahead, but Mills pounced to sweep around the outside of the pair at Hawthorns and remained in front on the final lap to score a maiden triumph.

Sherwood grabbed second at the start of the final tour to split the KMR duo, while Marzorati came home fourth to move level with Taylor at the top of the championship standings.

Fortec’s Jessica Edgar was fifth ahead of Megan Gilkes, who made up three places from ninth for Hillspeed. Logan Hannah lost ground at the start from sixth, eventually slipping back to eighth behind Graham Brunton Racing team-mate Chloe Grant.