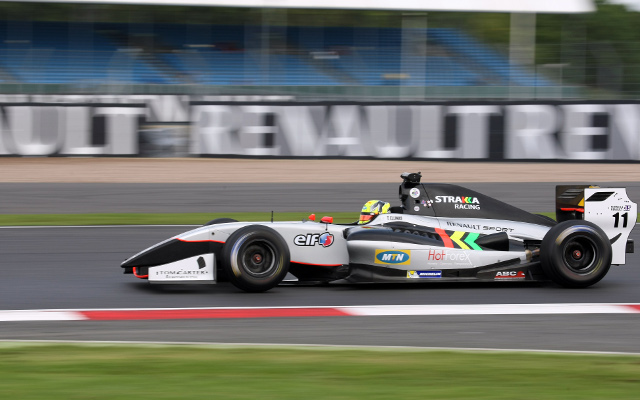 Tio Ellinas dominated the first Formula Renault 3.5 race of the weekend at Silverstone to take his maiden win in the series, leaving an eventful race to unfold behind.

The Cypriot kept the lead from pole position, while Jazeman Jaafar lept up into second before the first corner, passing the championship rivals Matthieu Vaxiviere and Oliver Rowland.

Jaafar got a good enough run out of Copse for there to be contact between him and Ellinas entering the left-hand kink at Maggotts, which dislodged the front of Jaafar’s nose cone.

From there, Jaafar struggled for pace, but as he was able to keep other drivers behind him, Ellinas could just open up a large lead at more than a second a lap.

Rowland got past Vaxiviere for third at the first corner of the race, but the Frenchman fought back and was able to reclaim the place at the same place a lap later after they had got very close to each other at Brooklands.

Vaxiviere was unable to get past Jaafar over the next laps and so came under attack from Rowland again into the Loop. In an attempt to outbrake his rival, Vaxiviere tagged Jaafar, giving himself very similar front end damage.

Rowland got the pass done on Vaxiviere down the following straight but instead of being able to attack Jaafar, came under challenge from Dillmann.

The Frenchman passed Rowland at Vale but the Brit did not give up, and as Dillmann took a look at Jaafar, he went around the outside of the Carlin driver at Village and then immediately passed Jaafar down the inside of the Loop.

By now, Ellinas was 14 seconds up the road and was able to nurse that advantage to the end, taking the chequered flag with eight seconds in hand.

Vaxiviere came back to third to limit the damage to Rowland in the title race.

Dillmann lost a podium shot by having a massive twitch at Becketts, sending him off the track briefly and down the order.

He did come back to fifth, behind Nyck de Vries, by passing Gustav Malja at the second attempt. The first saw Dillmann squeezed onto the grass on the Wellington Straight – an incident that will be investigated.

Egor Orudzhev finished seventh ahead of Nicholas Latifi, while Roy Nissany survived a clash with Bruno Bonifacio that put the Brazilian into the Stowe gravel trap to take ninth ahead of the ailing Jaafar.

Dean Stoneman was among a number of early retirements after a rear-left tyre went down.