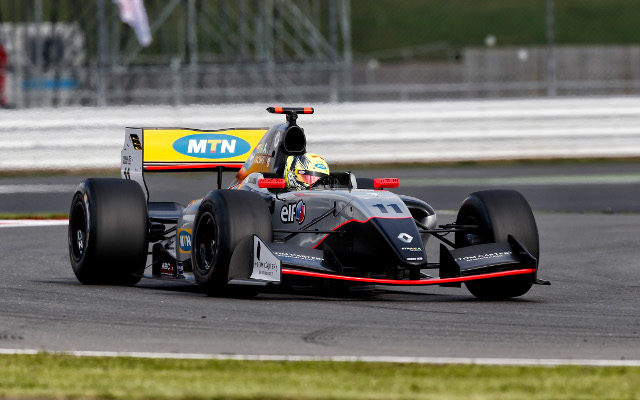 Tio Ellinas made good on his Friday pace to score his first pole position in Formula Renault 3.5 on Saturday morning at Silverstone.

On a circuit that began damp, Ellinas took charge after going to the top inside the final five minutes.

Every time he was challenged by his rivals, the Strakka Racing driver was able to improve his time again and pull away, ending up 0.236 seconds clear.

Title contender Matthieu Vaxiviere?had languished down in 15th before hauling himself up into second place inside the final minute. He got to within a tenth of Ellinas before the Cypriot’s final improvement.

Vaxiviere will start one place ahead of his rival and championship leader Oliver Rowland, who will share row two with his Fortec team-mate Jazeman Jaafar.

Pietro Fantin led through the middle part of the session after staying out later in the first runs and ended up fifth ahead of Tom Dillmann,?Nicholas Latifi?and Nyck de Vries.

Red Bull junior Stoneman had briefly taken top spot away from Ellinas at one point in the closing stages but was shuffled back before the end.

Series returnee Nick Yelloly triggered a red flag early on with an off into the Luffied gravel trap in his Lotus car.

He will share the back row of the grid with Roy Nissany, whose car stopped on track before Yelloly’s spin and so also failed to set a time.

Alfonso Celis was another to stop later on, leaving him 16th ahead of the Pons drivers, with Will Bratt beating Philo Paz Armand on his single-seater comeback after more than four years away.