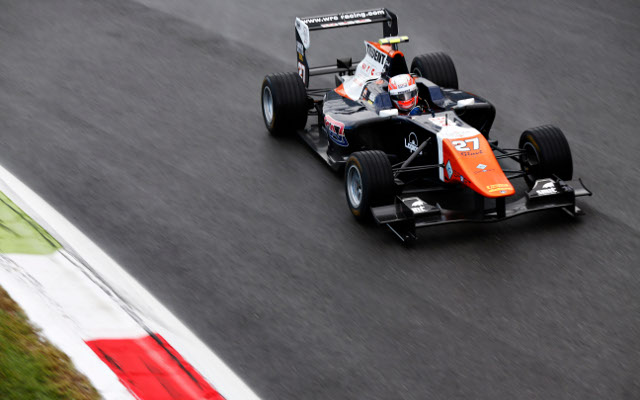 Championship leader Luca Ghiotto put on a crushing display to take pole by a whole second on a drying track at Monza, in the sixth round of the GP3 season.

The Trident racer was near the top for most of the session, which started out on treacherously wet conditions and poor visibility, forcing the cars to opt for the wet tyres.

Main rival Esteban Ocon was exactly one second behind Ghiotto, who set a 1m50.007s amidst a flurry of improvements in the dying moments of the session.

Matt Parry put in a solid showing to take third place on the grid, ahead of Arden’s Kevin Ceccon.

Emil Bernstorff will start fifth alongside former German F3 teammate Marvin Kirchhofer, who was just behind Ghiotto at the halfway mark but failed to get a clean lap in on his second run.

Ferrari junior Antonio Fuoco will start eighth, while the fifth row of the grid will be made up by Seb Morris and Jimmy Eriksson.

16-year-old debutant Amaury Bonduel qualified an impressive 13th for Trident, while experienced Monza racer Brandon Maisano?was 19th of the 20 runners on his debut for Campos.