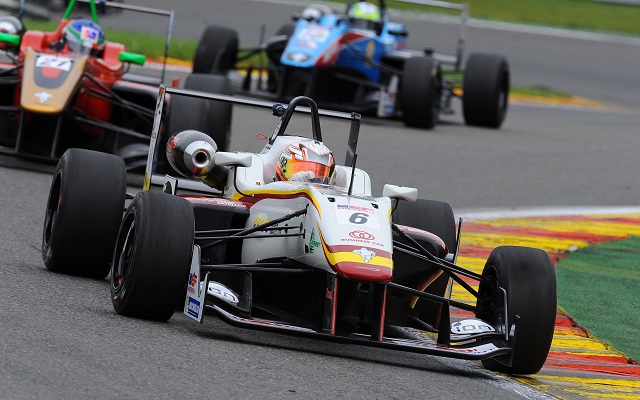 Konstantin Tereshchenko will start from pole position for the fifth time this year in the first Euroformula Open race at Spa-Francorchamps.

The Russian driving for Campos Racing posted the fastest time of 2m34.265s late into the session, which had started under wet conditions.

The first competitive laps were stunted by an early yellow flag as Jose Manuel Vilalta went off at turn two, though he was was able to keep the car going.

From the second lap onwards, no driver held the top spot on the timing sheets for more than a lap as the likes of Yu Kanamaru, Tanart Sathienthirakul, Yarin Stern and Tereshchenko traded places, dropping nearly a second a lap from the original 2m42.065s posted by Kanamaru.

The only other driver to come close to Tereshenko was the Brazilian Vitor Baptista, who was only two tenths off on his final attempt and will start on the front row alongside his title rival.

Taking up third position was Sathienthirakul, who was nearly a second behind Tereshenko?s pole time, followed by the rookies Leonardo Pulcini and Igor Wali?ko.

RP Motorsport’s Damiano Fioravanti took seventh ahead of Diego Menchaca as a disappointed Kanamaru ended up down in eighth by the end of the session. Stern and Alessio Rovera completed the top 10.