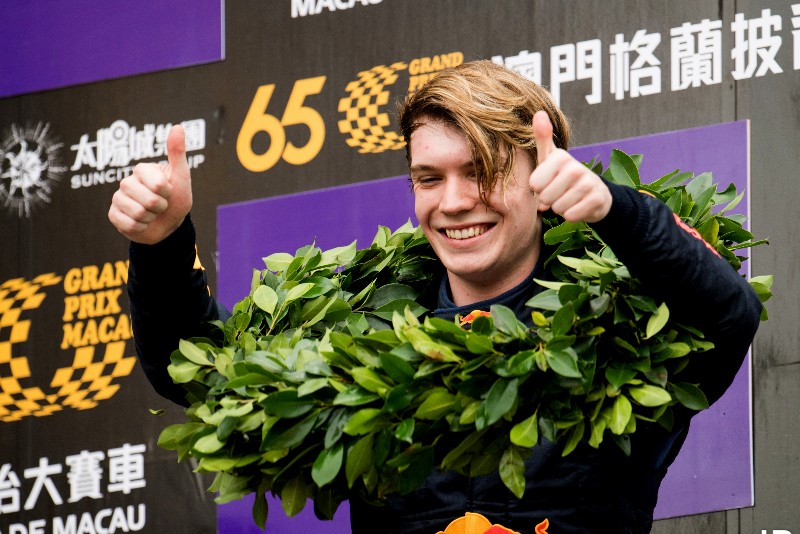 Two-time Macau Grand Prix winner Dan Ticktum and Ferdinand Habsburg, who lost the 2017 race at the final corner, will return to the race this year.

A provisional entry list has been released for the November 14-17 event, which will run using the FIA Formula 3 Championship cars for the first time.

Ticktum will join FIA F3 regulars Felipe Drugovich and Logan Sargeant at Carlin, having taken his 2017 and ’18 wins with the Motopark team which missed out on a slot in FIA F3 this year.

?I wasn?t sure if I?d have the chance to return to Macau again and so to be able to come back with Carlin this year is very exciting,” said Ticktum.

“Macau is the most incredible circuit and obviously I?ve been a race winner there in the past so that is obviously the aim again this year.

“It?s a really exciting challenge for me driving the new FIA F3 car for the first time in Macau, but hopefully I can get to grips with that and the Pirelli rubber quickly.?

Habsburg took the lead of the Macau GP in 2017 at the final corner, only to crash a few yards later on degraded rubber and finish fourth for Carlin.

This time he joins ART Grand Prix, visiting Macau for the first time since 2009, which also fields its FIA F3 race-winner Christian Lundgaard and Sebastian Fernandez, who contested the season with Campos Racing.

Other full line-ups include Prema, with its title dominating trio of Robert Shwartzman, Marcus Armstrong and Jehan Daruvala; Hitech GP, which has signed Max Fewtrell from ART and Yuki Tsunoda from Jenzer to join Juri Vips, and Sauber Junior Team by Charouz.

David Beckmann has switched from ART to Trident, along with another FREC graduate in Olli Caldwell, with HWA retaining Jake Hughes and Keyvan Andres as expected.