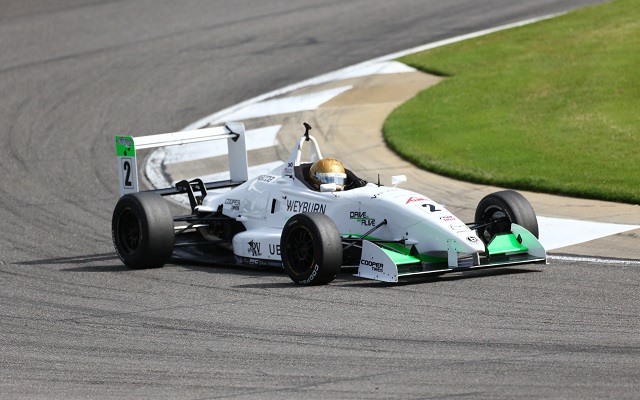 Parker Thompson doubled up by winning?Race 2 at Barber Motorsports Park and taking the USF2000 points lead as a result.

The Canadian had a better launch than fellow Cape Motorsports teammate Anthony Martin and took the lead at the start.

Martin on the other hand, was unable to hold on to second as he was quickly demoted by both Luke Gabin and Jordan Lloyd.

The first of two safety car periods started on Lap 2 in order to clear the damaged car of James Munro and on the restart Martin lost another position to Victor Franzoni.

At the front, Thompson was unchallenged but a mistake from Gabin allowed Lloyd through, only for the duo and Franzoni to make contact.

While Gabin stayed in second, the Brazilian dropped as low as 13th and Lloyd went a lap down with front wing damage, bringing out caution.

Thompson nailed the second restart and cruised to the finish with Gabin securing second, holding off Martin.

The latter was overtaken by Pelfrey driver and top rookie Robert Megennis on the penultimate lap, the American scoring his second podium in four races.