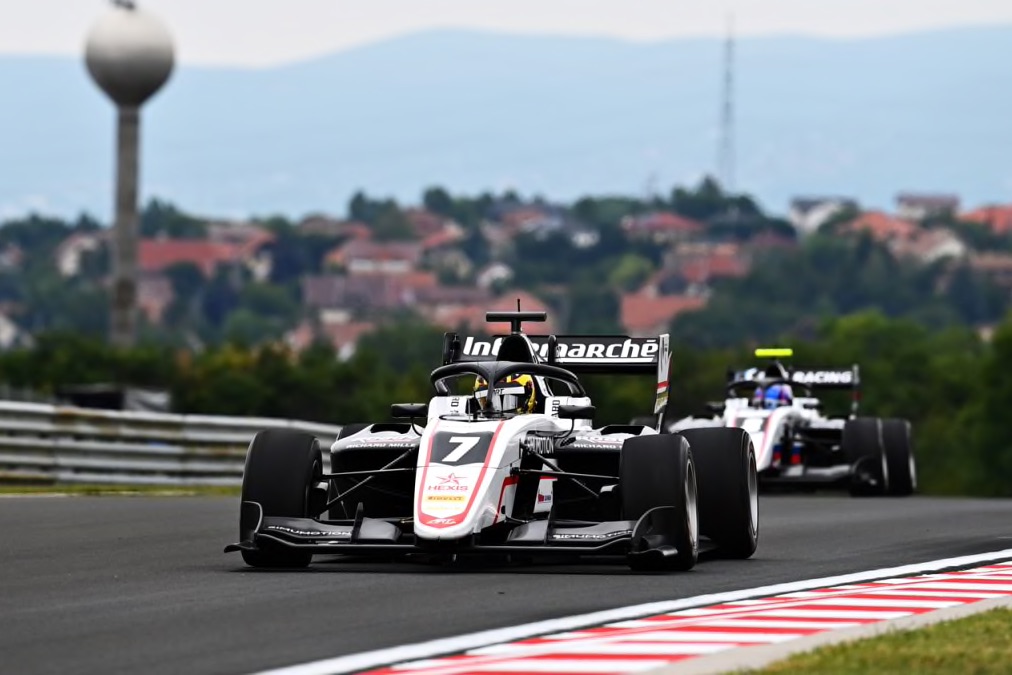 Theo Pourchaire became the first double winner in the 2020 FIA Formula 3 championship after a strong drive in mixed conditions at the Hungaroring.

Pourchaire – who last weekend became the youngest ever winner in Formula 1’s third tier – inherited the race lead after Logan Sargeant collided with pole-sitter Alexander Smolyar at the first corner on the opening lap, eliminating Smolyar.

Damp conditions in the first portion of the race lead to many wide moments and a spin from Calan Williams behind the Sargeant-Smolyar clash collected both Frederik Vesti and Oscar Piastri, though Piastri was able to continue.

Piastri was running second when the red flags were brought out due to a fiery oil spill from Liam Lawson, who retired from the race.

On the restart, Piastri kept the pressure on Pourchaire, but the ART driver was eventually able to shake him.

While Piastri battled with team-mate Sargeant, Pourchaire consistently set fastest laps to extend his lead, eventually finishing 11.920s ahead of the championship leader.

Avoiding a penalty for taking Smolyar out of the race, Sargeant held onto third ahead of Bent Viscaal, who managed to find a way past Richard Verschoor in the closing stages of the race after a race-long battle with his MP Motorsport team-mate.

After avoiding a collision with Lawson’s leaking car, Sebastian Fernandez ran fourth before falling behind the Dutch duo.

Enzo Fittipaldi had been set for his best result of the season when he passed both Alex Peroni and Max Fewtrell at the restart, but the HWA driver was one of a number of drivers who received penalties for infringements during the red flag and safety car period, and he dropped backwards after serving a drive through penalty.

Clement Novalak had a strong drive up through the field to finish ninth after starting 26th on the grid. He spent the final laps in a battle with Dennis Hauger but couldn’t find a way past the Red Bull junior, who scored his first F3 points in eighth.

David Beckmann completed the top 10 and will start race two from the reversed-grid pole.