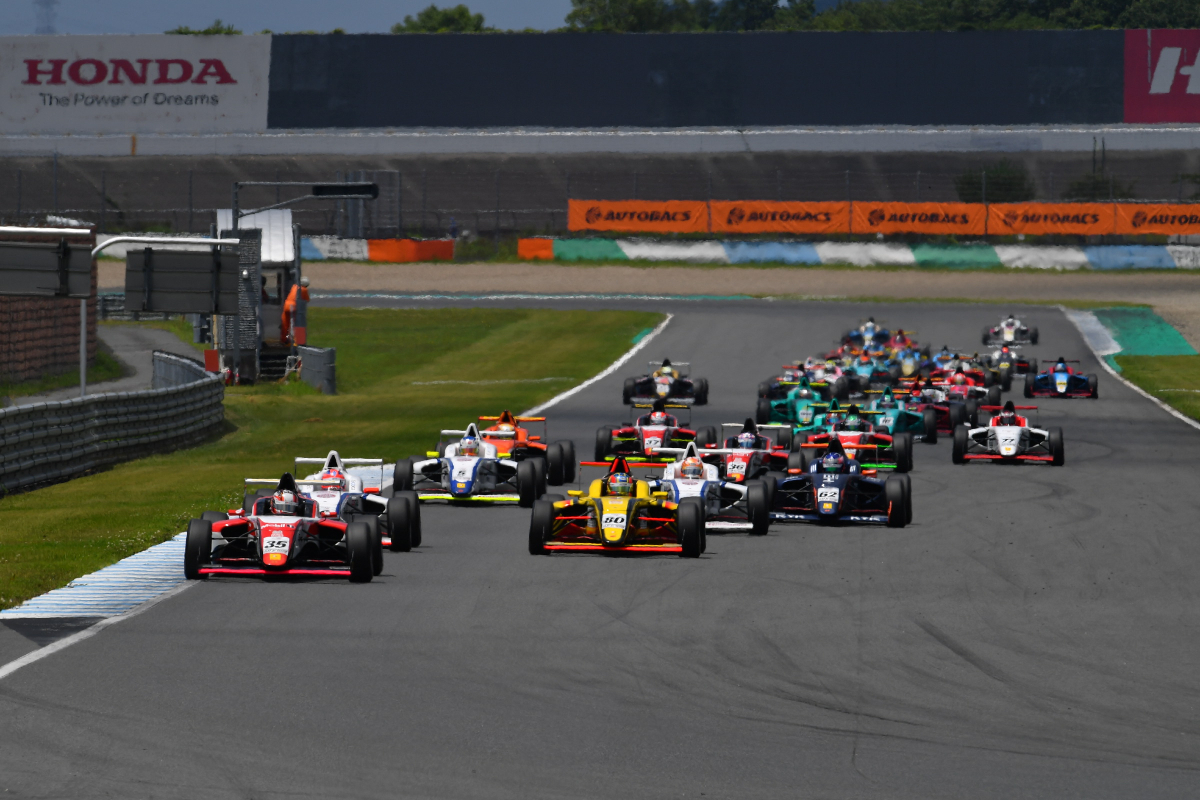 Formula 4 once again kick-started the careers of a large number of drivers this year, in series across the globe. Ida Wood runs through the FIA series, and some of the lesser-known championships too

Since 2014, F4 has grown and grown to become the de facto entry point for single-seaters. There’s series taking place on four continents, and Ollie Bearman won the two biggest this year. You can read our review of his double triumph here, and about his fellow trophy recipients at the FIA Prize Giving Gala below…

In a championship where gaps between cars can sometimes balloon on narrow circuits, it has to be said that Japanese F4 was the most hard-fought F4 series of this year.

Honda bowed out of the series at the end of 2019 after doing the title double for the second year in a row, and Toyota slotted in with its own junior team in 2020 and promptly won. It wasn’t a big surprise that Honda returned for 2021 to fight its rival.

Toyota had four drivers to Honda’s three, and the stability of a line-up mostly carried over from the previous season, but the experienced Kakunoshin Ohta led the Honda trio and it looked tough to call who could come out on top.

Newly-signed Toyota junior Rin Arakawa drew first blood by taking pole for race one of the Fuji Speedway season opener, but was handed a seven-place grid penalty for repeated track limits violations and it resulted in Honda’s Iori Kimura and Syun Koide filling the front row.

They turned that it onto a one-two finish ahead of Toyota’s Seita Nonaka, who was pipped to race two pole by Koide but had the path cleared for him to win when Kimura spun around Koide at the first corner. Honda’s hopes totally expired when Ohta locked up, spun and hit Toyota’s Eijirou Shimizu before plummeting down the order.

Shimizu fought hard to then complete a Toyota 1-2-3, and it may have been the race that ultimately cost Honda title glory. 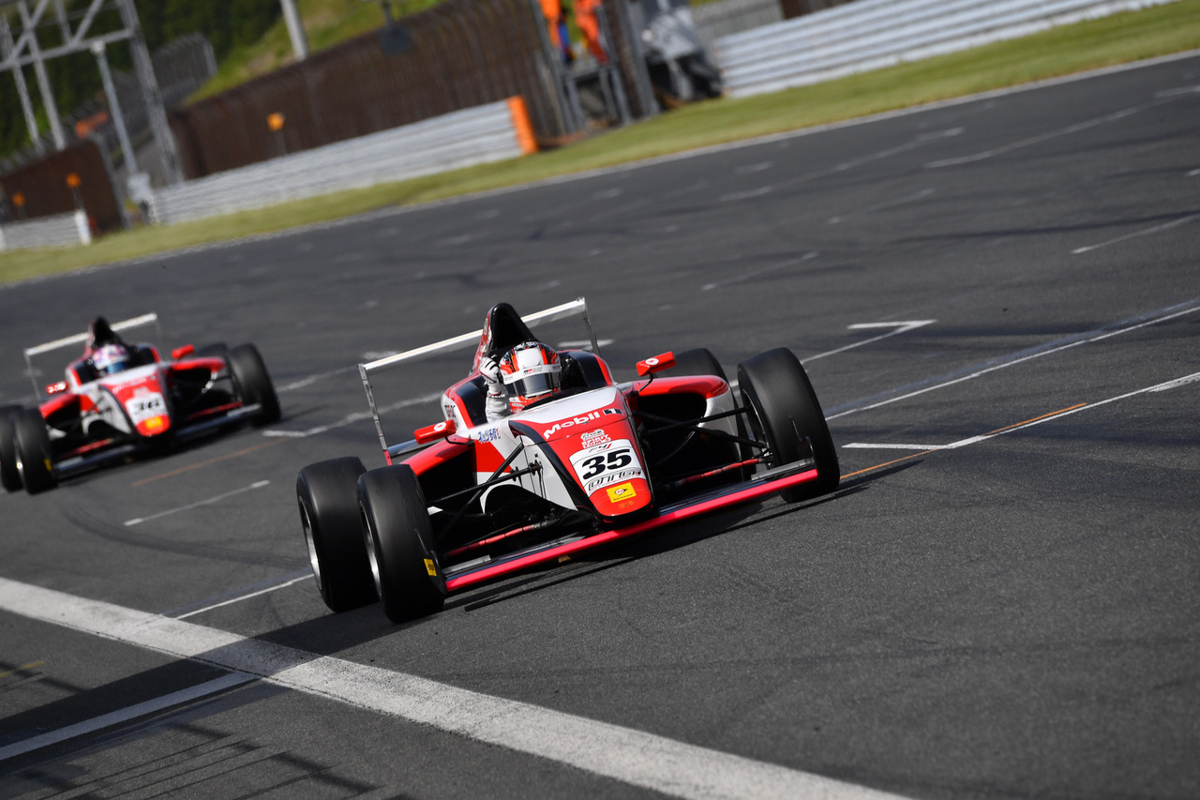 Round two was a triple-header at Twin Ring Motegi. OTG Motor Sports’ Reimei Ito edged Nonaka to pole, but the latter dominated all three races to leave with a massive 47-point lead over team-mate Arakawa.

Honda was back on top on its home soil of Suzuka, with Kimura winning twice on the road. He kept his wet race one triumph, but a five-second penalty for a strong defence against Nonaka on a safety car restart cost him race two victory to Arakawa.

He didn’t let that knock him back, as Honda was in form again at Sportsland SUGO. Koide won race one, Kimura held off Ito to win race two, then was on course for race three victory too but got pinged for the same offence as at Suzuka and the resultant drive-through penalty left him down in 26th while Ito got his maiden win and OTG’s first since 2018.

Kimura was 18 points behind championship leader Nonaka at this stage, but aggressive driving earned him a win on the second trip to Motegi and cut that gap down to five points.

Arakawa claimed pole for race two of that weekend, but had Nonaka and Kimura overtake him on lap one. He soon led again though as they collided, and Arakawa went on to take the win and points lead.

Nonaka retired immediately, while Kimura dropped out of the top 15 but charged back up to ninth.

The final round took place at Fuji, and Ito took a double pole. Nonaka beat him to victory in race one, setting up a Arakawa-led showdown with Nonaka and Kimura for the title in race two.

Ito made a great launch from pole, as Arakawa and Nonaka went side-by-side into turn one. Kimura made it three-wide at turn two and snatched second, with Koide also passing Arakawa.

The safety car was then summoned after Dragon went off; Nonaka now leading the championship. On the restart Ito jumped away again, while the manufacturer juniors went four-wide behind. 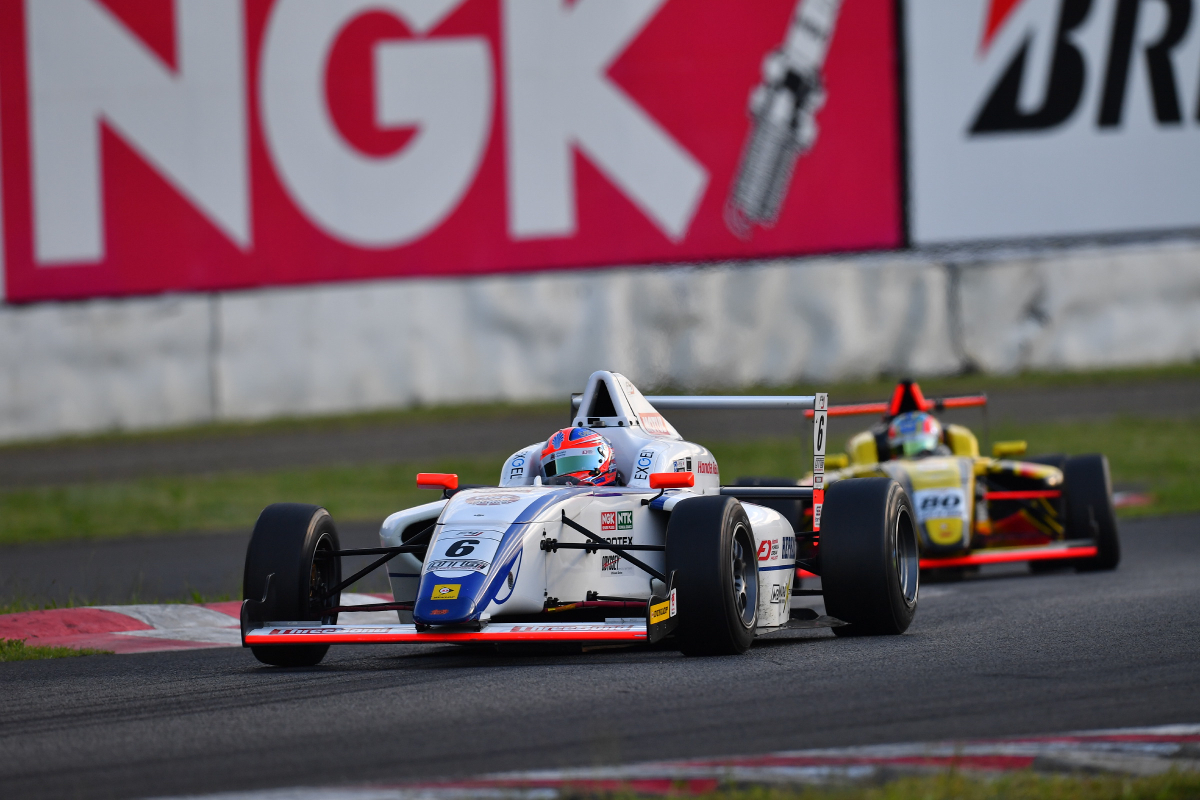 Arakawa braked super late on the inside to go from fifth to second, but had a few corners of fighting Nonaka after. A four-car battle formed again before safety car boards were shown for a collision.

Ito immediately jinking right down the pit straight on the restart, but Arakawa went further right and braked late again. Both went deep, he led and Ito went behind Nonaka and briefly Kimura too.

Kimura slipstreamed past Ito, and Koide passed too, on the next lap while Nonaka chased leader Arakawa. After several attempted moved he passed him under braking at turn one on the penultimate lap, putting him back in the points lead.

The late braking brought the Honda juniors back into it too. Ito made a lunge, Ohta passed Kimura for third then got passed back, but Nonaka held on to win the race and title.

In the non-FIA JAF Japan F4, Seiya Motojima won the 10-race, seven-round season despite missing four of the races. He won every single race he turned up to, and was unbeaten in qualifying too.

The ‘Special Battle’ event at Suzuka that ended the year didn’t go Motojima’s way. He took pole and dominated the semi-final, but hit trouble on the penultimate lap of the final and retired, leaving Satoshi Kato to gladfully take the win instead. In Japanese F4 he didn’t have too much success either with Saccess Racing, coming ninth in the standings with one podium.

Kohei Tokumasu was title runner-up in JAF on dropped scores, finishing second five times after missing round one. The driver who lost out as a result was Hammer Izawa, who won at Motegi in Motojima’s absence and outscored Motojima too but had to drop 20 points after always finishing in the top four. He did however claim the F4 Association’s ‘Grand Champion’ title. 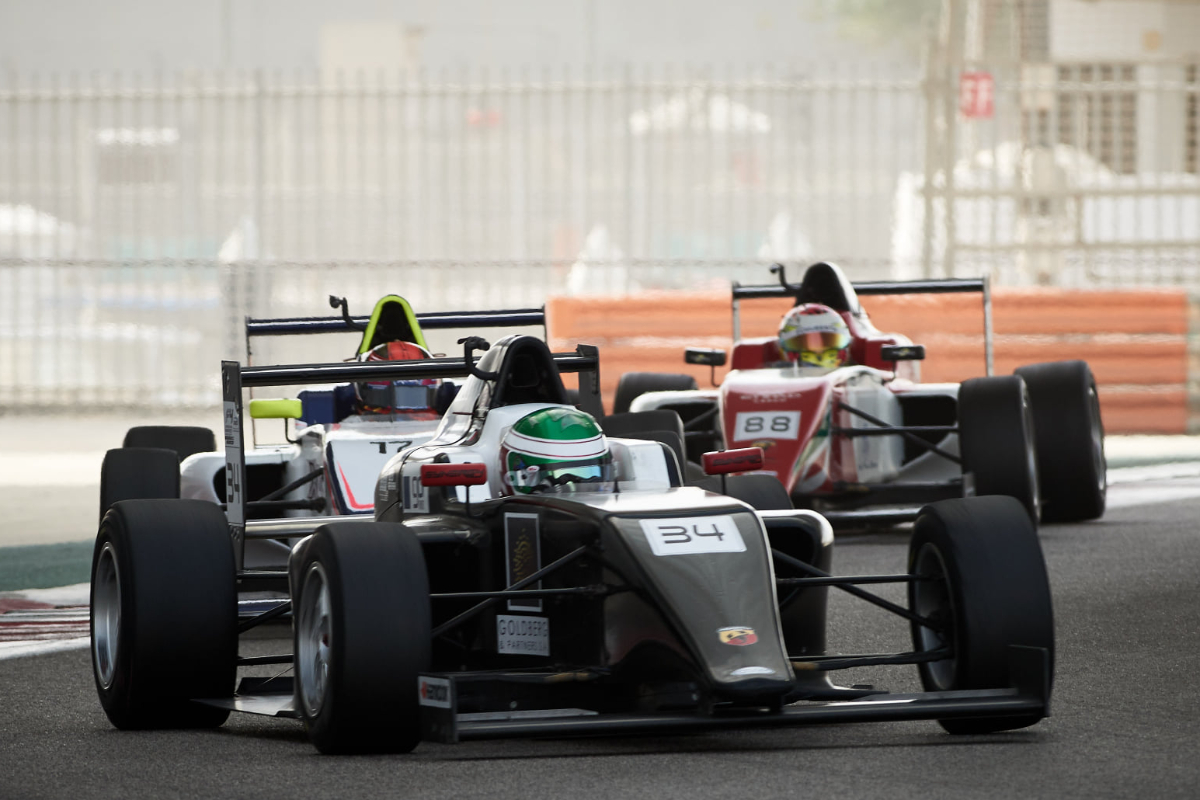 The year started with a ding-dong battle between Dilano van’t Hoff and Enzo Trulli in F4 United Arab Emirates, eventually won by Trulli after holding off van’t Hoff for third place in the final race of the season. Trulli went on to Euroformula, while van’t Hoff moved across to Spanish F4 where he dominated.

For the second year running Chinese F4 was beset by multiple delays due to the COVID-19 pandemic, but did include the Macau Grand Prix again and was often dominated by the guesting Charles Leong. His fellow Macanese Andy Chang became champion, with one win from 10 races, while Leong won all six of the races he started.

There should have been a South East Asian series in action too after the pandemic forced the cancellation of the 2020 season, but lockdown periods and travel restrictions prevented F4 SEA from returning and it now targets a 2022 comeback.

The tastiest rivalry in Europe ended up in court, as French F4 title contenders Esteban Masson and Maceo Capietto collided on the last lap of the season. Capietto was initially champion, but was then excluded from the Magny-Cours season finale and that gave the crown to Masson. That punishment was appealed by Capietto’s father, but it was not upheld in the national court of appeal of the French governing body FFSA earlier this month and Masson was confirmed as champion ahead of Australian Hugh Barter and Capietto.

Masson won six races in the centrally-run series, while Barter won twice – including the controversial title-deciding race, and Capietto was classified as the first placed finisher on four occasions but also got the points for victory from two Monza races where guest driver Elliott Vayron (who has recently tested with Drivex School in Spanish F4) won. French F4 Junior champion Alessandro Giusti won twice and made the overall podium four other times. 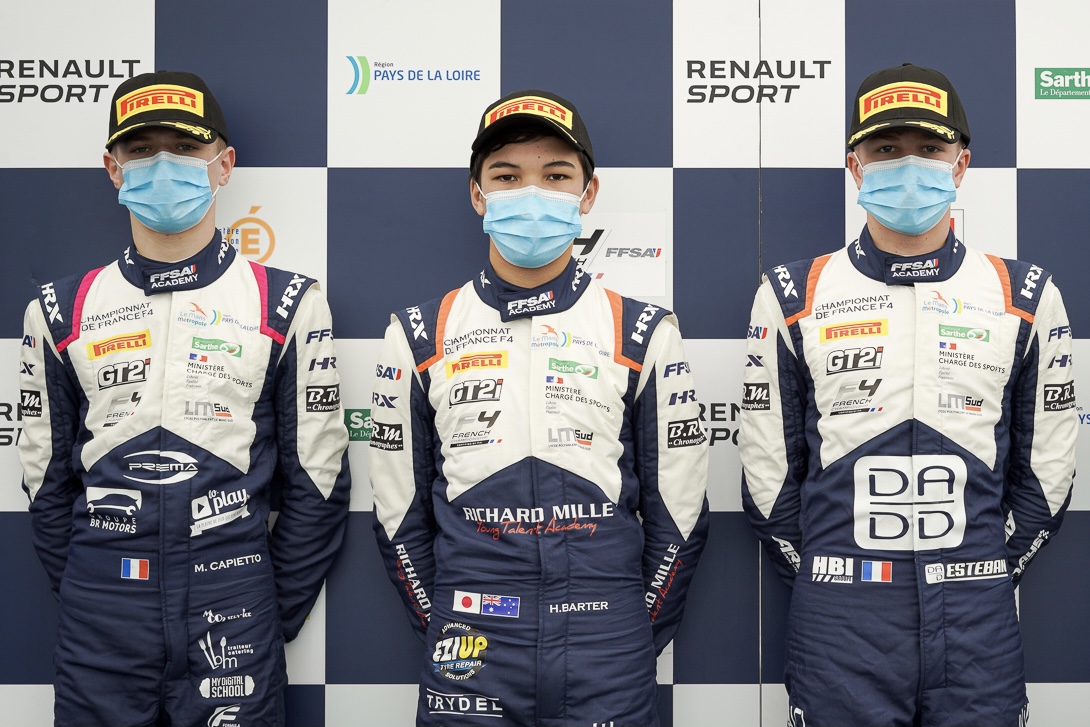 Behind van’t Hoff in Spanish F4 was ex-Danish F4 racer Sebastian Ogaard, who led Campos Racing’s first attack at F4, and his team-mate Pepe Marti was third in the standings with two wins from his rookie campaign. He’s linked to a move straight up to FIA Formula 3 for 2022.

Juju Noda brought a lot of eyes to Danish F4 again this year, after a very brief attempt at United States F4 with Jay Howard Driver Development that is understood to have ended before even making her race debut there in part due to a technical controversy the team had been involved in the year before in the series.

Noda’s battles with Sauber junior Emmo Fittipaldi, and their ex-Formula 1 racer parents’ responses to those, caught the headlines but the real star of the series were Mads Hoe – who won the title in a Formula 5 car in addition to running his own team – and Noah Stromsted who missed the first third of the season but debuted less than a month after turning 14 and won on his debut. A further eight wins propelled him to the title runner-up spot.

Jussi Kuivakangas was Formula Academy Finland champion after technical issues took down one of his rivals in the season finale. He sealed the deal with a dominant win over his other rival in the title-deciding race. Earlier in the season there was a starring cameo from single-seater debutant Tuukka Taponen, whose primary focus next year will be karting, under the watchful eye of Ferrari, despite winning his first two races in cars.

The Austrian F4 Cup was won by 17-year-old Patrick Schober, who has been racing single-seaters since 2018. While he rarely had any more than one on-track rival, and did miss the season finale, the Red Bull Ring round was contested by ADAC F4 drivers and British F4 champion Luke Browning took a double win. 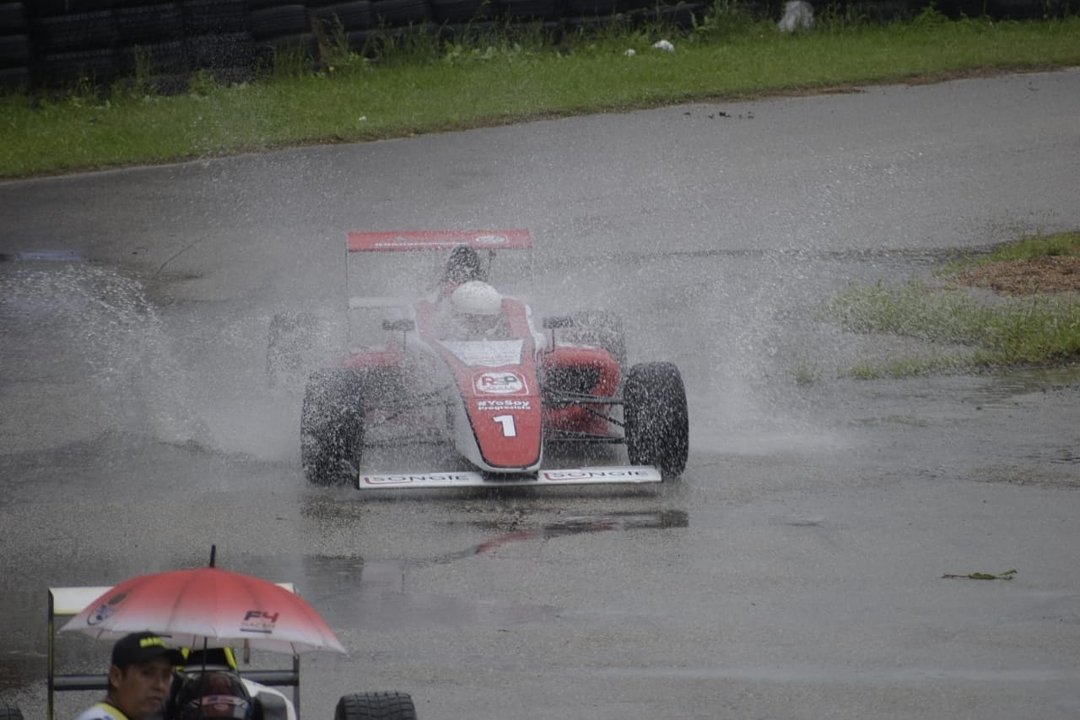 Noel Leon followed up his 2020 NACAM F4 crown with the United States F4 title, but he had no successor to his first triumph. For reasons still not fully understood by those competing, the NACAM season was turned into a four-round calendar of non-championship events in Mexico and the USA and concluding with a support slot at F1’s Mexico City Grand Prix.

You can read about the confusion the loss of championship status caused here, as well as the full story and results from a season that won’t go down in the history books besides being a footnote in the oddly-advertised Formula USA.

The USA had several regional and winter series in action too.

Nine wins from 12 races meant William Ferguson cruised to the F4 Western title, after being runner-up last year. Before that, Nick Persing won the F4 Western Winter Series ahead of Ryan Yardley, with both then stepping up to Formula Regional Americas and making the podium.

On the other side of the USA a poorly-contested F4 Eastern series, from the organisation behind the Atlantics series, came into existence and it went the way of Christian Weir. An average grid size of 3.4 gave the Turn 3 Motorsport driver not much of a challenge, but the then-14-year-old made the podium in both of his US F4 appearances and performed well in USF2000.

He debuted in YACademy Winter Series, which is becoming the official winter series of the Road to Indy’s new-for-2022 F4 championship USF Juniors and is helmed by IMSA race-winner Gustavo Yacaman.

Nico Christodoulou edged Mac Clark to the title of the two-round series, and they went on to finish fourth and second in US F4 respectively. Weir came seventh and Noda was 11th in the standings.

F4 returned to South America in 2021 via the new Argentinian F4 championship, won by some margin by Federico Hermida. His points gap was huge, but the races were often very closely fought.

More on international F4
The route Bearman took to his momentous F4 title double
The question that has led Mucke Motorsport to leave single-seaters
ADAC F4’s record low grid explained, and why it will be a one-off
The youngest ever winners in FIA F4