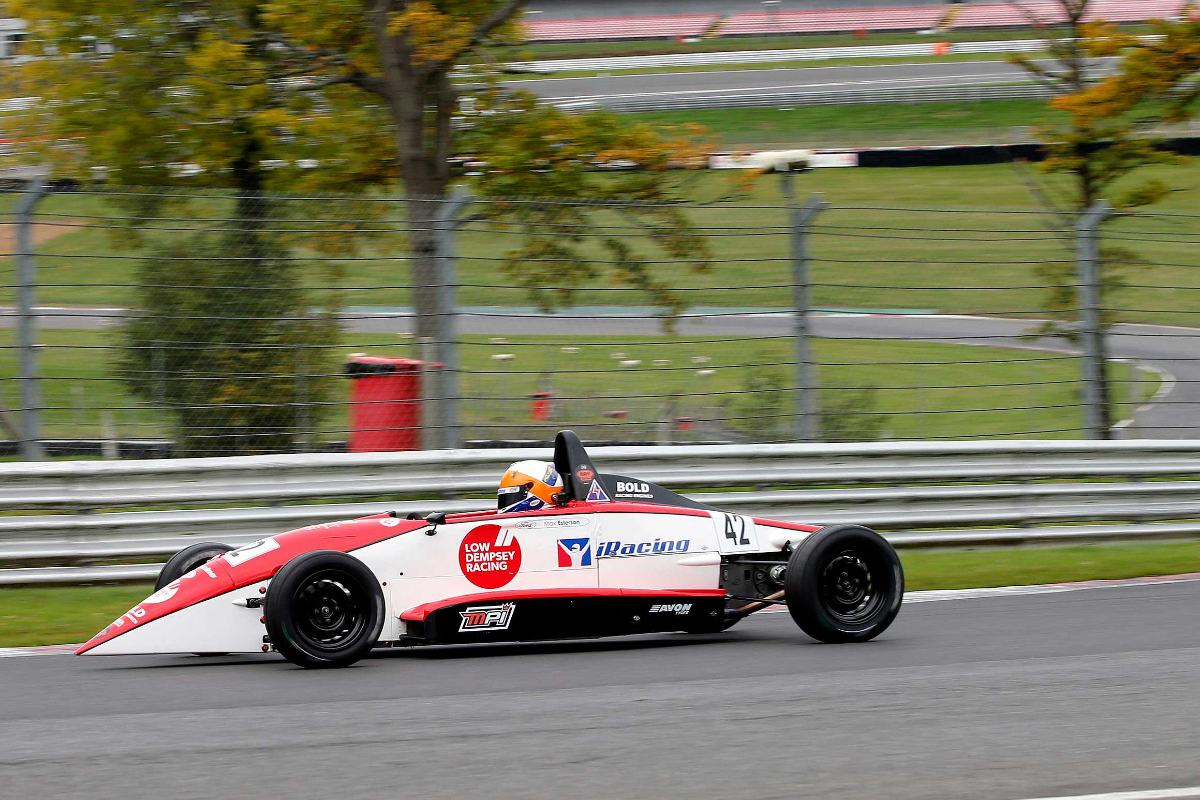 In the latest episode of the Formula Scout Podcast, newly crowned Road to Indy eSeries champion Max Esterson explains how he wants to turn his Esports form into success on the UK Formula Ford 1600 scene

As the switch from Esports to real-world racing has become more popular over the last 10 years, there’s been one particular path for aspiring single-seater drivers that has frequently been used but then forgotten. And that is Formula Ford 1600.

Some of the most famous simulator racers in the world have plied their craft in FF1600, with Graham Carroll having won the Scottish FFord title and Walter Hayes Trophy in his youth, and his Red Bull Esports team-mate Sebastian Job treading the same path a decade later. There was then interest across the globe in 2019 when Formula Scout broke the story that two-time Formula 1 Esports champion Brendon Leigh would race in BRSCC National FF1600, where Max Esterson is now headed.

Earlier this week, the 18-year-old won the third season of the Road to Indy’s eSeries in a virtual version of the current Indy Pro 2000 car on the iRacing simulator platform. That car is a far cry from the wingless one he will race in the United Kingdom.

Esterson spoke to Formula Scout about what’s motivated his move into FF1600, and you can listen to the interview here as well as finding it on Breaker, Google Podcasts, Overcast, Pocket Casts, RadioPublic, Castbox, Apple Podcasts and Spotify. 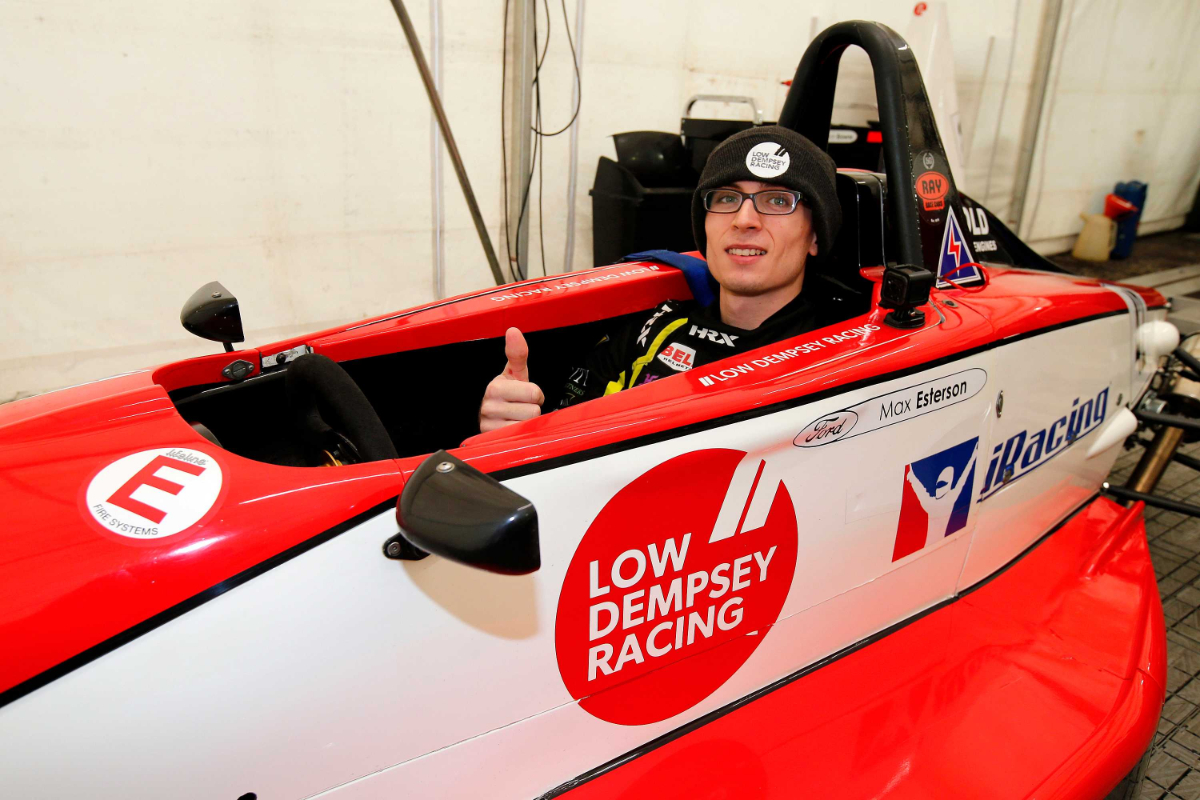 “Esports is where it really started [for me] in racing. I’ve always been a fan of real motorsport,” Esterson tells Formula Scout.

“On iRacing I started around eight years ago, and then maybe five years ago I started to realise it was something that I was pretty good at. Two or three years ago I joined Vendaval Simracing, and we mostly do endurance racing. But I did two years of the GT iRacing World Championship, and finished seventh in 2019.

“I’ve taken a little bit of a step away from it since I started real racing, just because of time constraints. But when I put time into it, I’m still at the sharp end.”

And Esterson really was at the sharp end against current Road to Indy stars and IndyCar racer James Davison in the eSeries, winning three of the 10 races and normally setting the pace at each round along with 2019 USF2000 champion Braden Eves.

Rather than going into USF2000, the bottom rung of the Road to Indy and a likely next step after FF1600, Esterson made his car racing debut in 2020 in America’s F1600 Championship Series after a year-and-a-half in karting.

“In the US that seemed like the best option in terms of budget. You could either go to Formula 4 or USF2000, but F1600 seemed the most logical choice to make there. The cars there, they’re just good cars compared to the F4 cars. They’re 300lbs lighter, pretty much the same speed with two thirds of the power. Same Hewland [H-pattern] gearbox that is in the UK cars.”

F1600 has a lot of similarities to FF1600 in Europe, but uses Honda engines and a slightly different profile of modern cars.

“There were a few veterans and quite a few rookies like myself, so a good balance and kind of somehwere where I belonged,” Esterson says of the 2020 F1600 field. 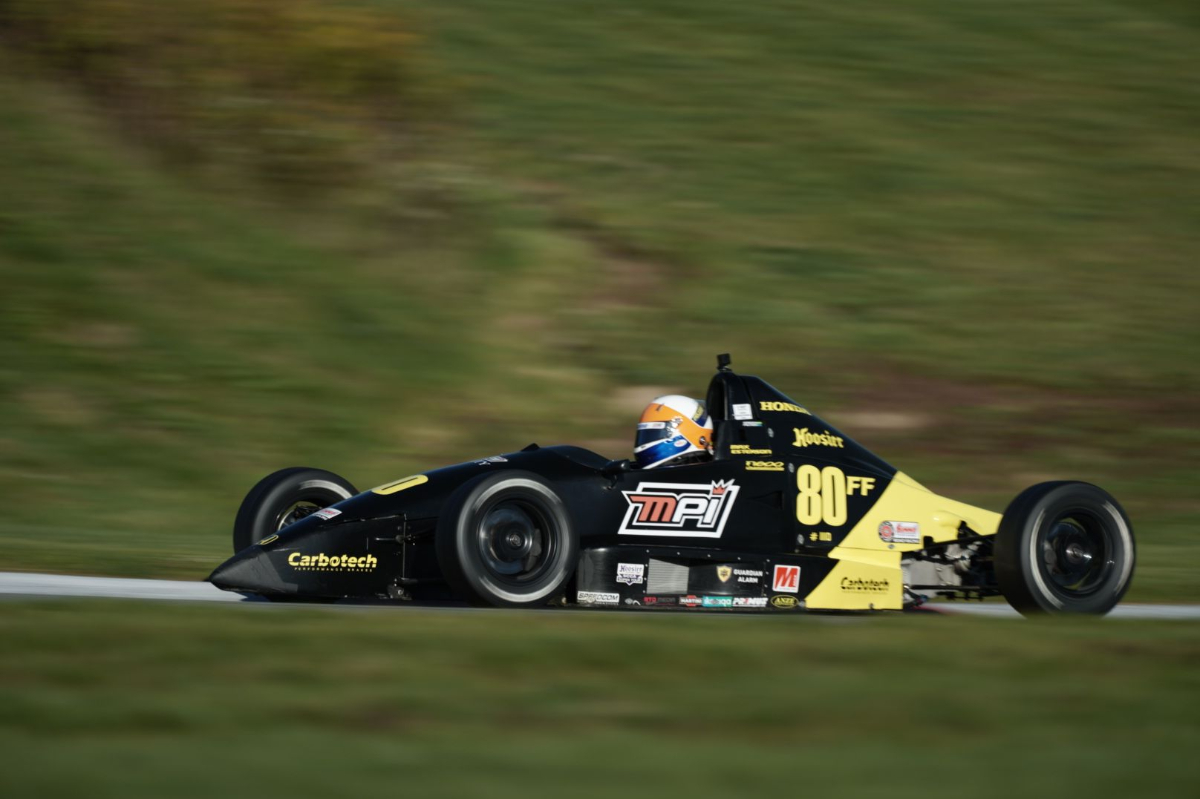 “The first weekend was kind of overwhelming, which I guess is to be expected. After the first weekend, I settled in and got the hang of it. I found my way a bit there, then really late in the season is kind of where I found my groove.”

Later in the year, Esterson tried out winged machinery in F2000 and made his first visit to the UK to join PWR1 Racing for the Champions of Brands FF1600 races and the final National FF1600 round.

He made the top 10 in his National appearance, then switched to Low Dempsey Racing for the FFord Festival and the Walter Hayes Trophy with iRacing as his primary sponsor. It was the culmination of a season of seeing how applicable his Esports skills were, with a clean run to sixth in the Festival and 14th in the WHT.

“Most of the driving I have done on iRacing has been in GT cars. For sure, stuff is transferrable. It’s a little bit different on the brakes in an open-wheel car, and just between the sim and real life, but showing up to tracks last year in my first year in cars and knowing them so well, like feeling I’ve driven there hundreds of times, was super helpful.

“So much of sim racing is about making set-up changes, because you have pretty much unlimited track time to test stuff, so feeling some of that stuff in the sim and seeing how that compares to real life was also super helpful.”

While well prepared on the simulator, there were some very new aspects to FF1600 that Esterson had to learn in the UK.

“It’s definitely a little different in the States, especially with the racing. Even though the cars are very similar, it’s quite a bit different with the different tyres.

“The tyres we have here, they have a lot more grip but physically they’re a lot bigger so the hole the car is punching in the air is pretty massive. So it’s usually just a huge draft train, combined with the circuit nature with the long straights it ends up being a train that you can’t really pull away from. 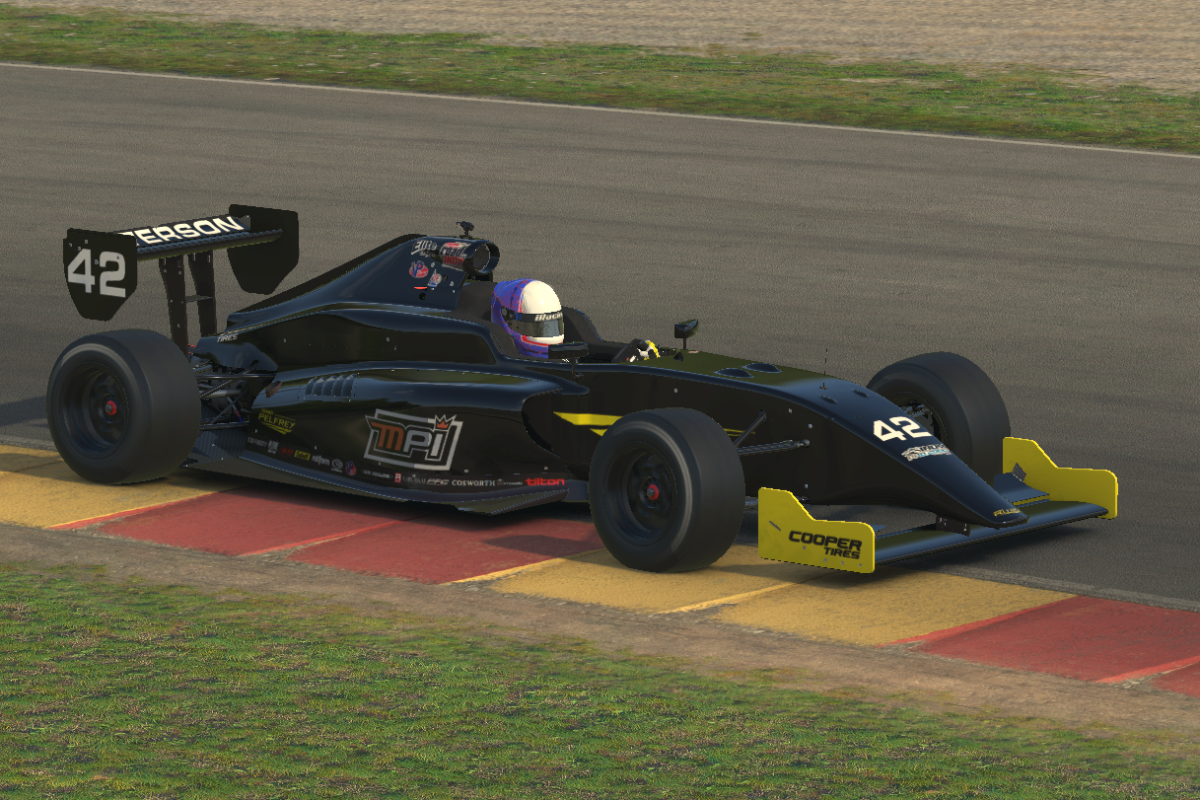 “[UK racing] is hard, but it’s very fair at the same time, and that’s what I enjoyed about it. You’ll have a battle anywhere in the field, people fight for their life for 10th place, especially in an event like the Festival where there’s no championship on the line, it’s pretty much you’re going for the win. That’s a pretty cool aspect of it, and it’s definitely attracted me back.”

Esterson has driven all of the National tracks bar Anglesey on iRacing, and is looking forward to visiting the “super cool” Oulton Park for the round that will support BRDC British Formula 3. That series could be Esterson’s next career step in 2022.

And of course one huge aspect of UK racing is the weather.

“Before going to the Champion of Brands races in September, I had one 15-minute session in the wet in the US on full rain tyres, which you don’t have in the UK. So 15 minutes of total rain experience in the car, and then my first rain race was the heat race at the Festival. I ended up third, so it was alright. My second rain race was the semi-final, and my third was the final.”

The last, and only, time an American has won the FFord Festival was Josef Newgarden in 2008, and he’s gone on to become a two-time IndyCar champion. No American has ever won Britain’s main FFord title before, and besides Carroll there has actually been very limited FF1600 success for Esports stars, so Esterson is aiming high against the experienced UK opposition.

“I really want to win the Festival. I think I’d take that over the championship title probably. After last year going there, it’s just something that I want to win super badly.” 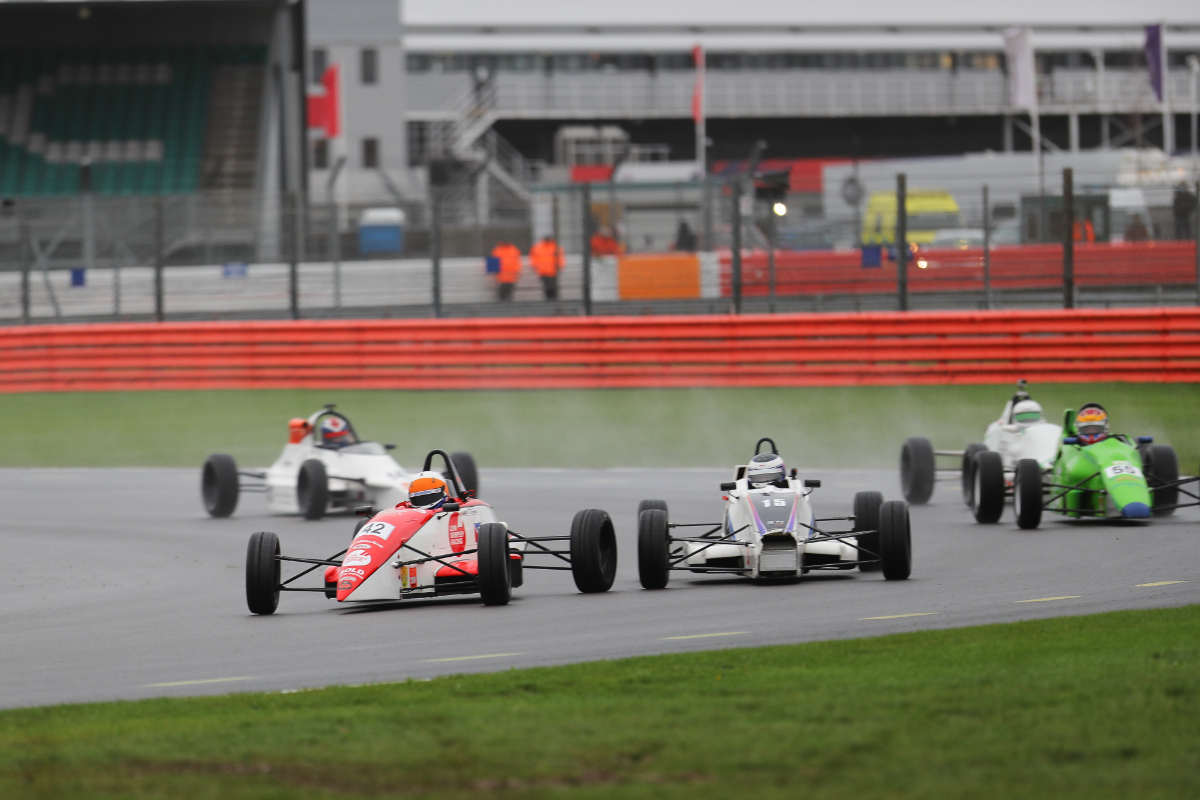