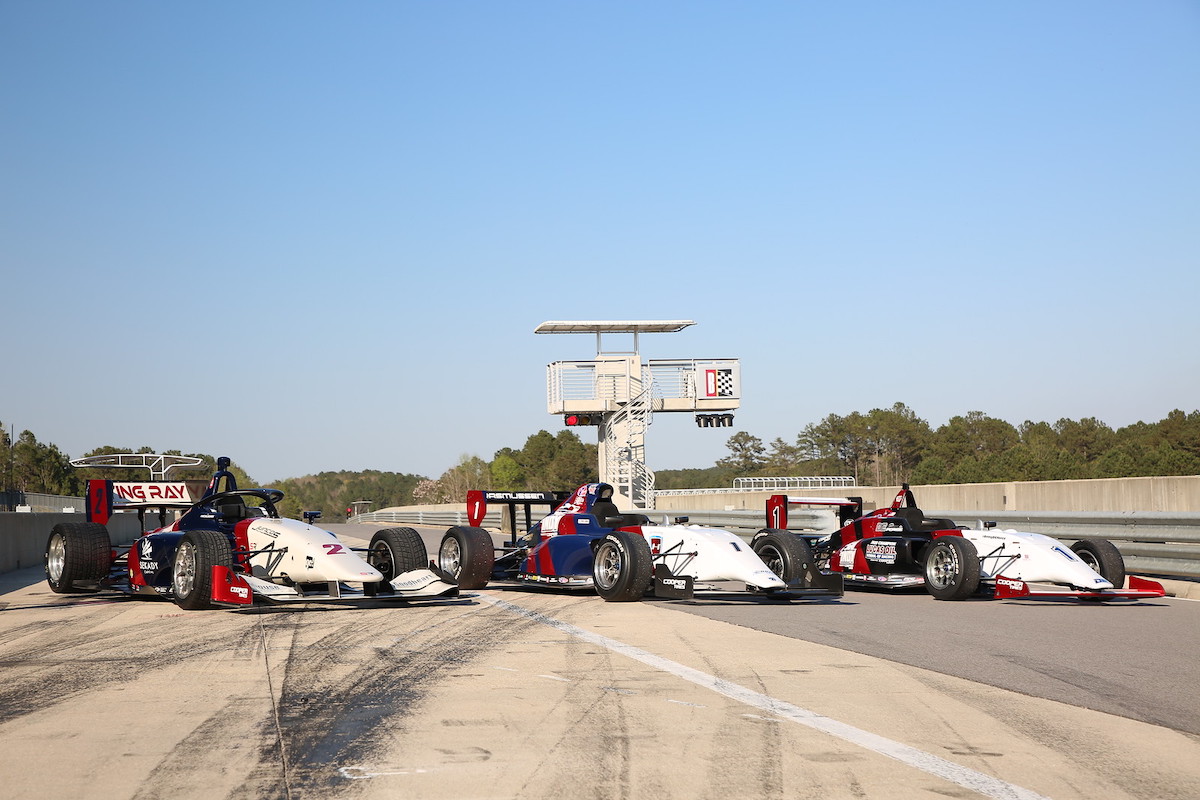 Indy Lights returns with a halo and Detroit, Indy Pro 2000 attracts two Formula 3 stars and USF2000 will be the focal point of IndyCar’s new diversity drive. There’s lots to look forward to on the Road to Indy in 2021

American motorsport fans only got to catch a single free practice session in Indy Lights last year, then got to see very little of what occurred next for Indy Pro 2000 and USF2000 as the coronavirus pandemic restricted spectator access for some time. Life is returning to normal in 2021 though, and there is a lot to look forward to across all three championships.

Indy Lights’ cancelled 2020 season has only built up anticipation for this year, with a return to the streets of Belle Isle in Detroit for the first time since 2012 and an upgraded Dallara IL-15 that now features the halo cockpit protection device. That does come somewhat at the expense of losing the Indianapolis 500-supporting Freedom 100 race, and Gateway will instead hold both of the championship’s oval races. But with 13 full-season entries, it will be the biggest series grid since 2017.

The oval allocation for IP2000 is one race at Gateway and another at the short Lucas Oil Raceway, where USF2000 will also be present in May. And while Indy Lights finishes its season with trips to Portland International Raceway and Laguna Seca, the two lower series centred on the same base Tatuus chassis will run a triple-header at New Jersey Motorsports Park instead.

Formula Scout runs through all three of this weekend’s grids to pick out the names to look out for this year:

Three returnees, 10 rookies and teams that are entirely new or returning to the series. There’s lots to look forward to.

Each of the sophomore drivers have title credentials, and Juncos Racing’s Toby Sowery is the most successful returning name after coming third in the points in 2019 with seven podiums. The Briton didn’t race at all in 2020 though after the Indy Lights season got called off and he tried to shake off his race rustiness in the recent Road to Indy Esports series. 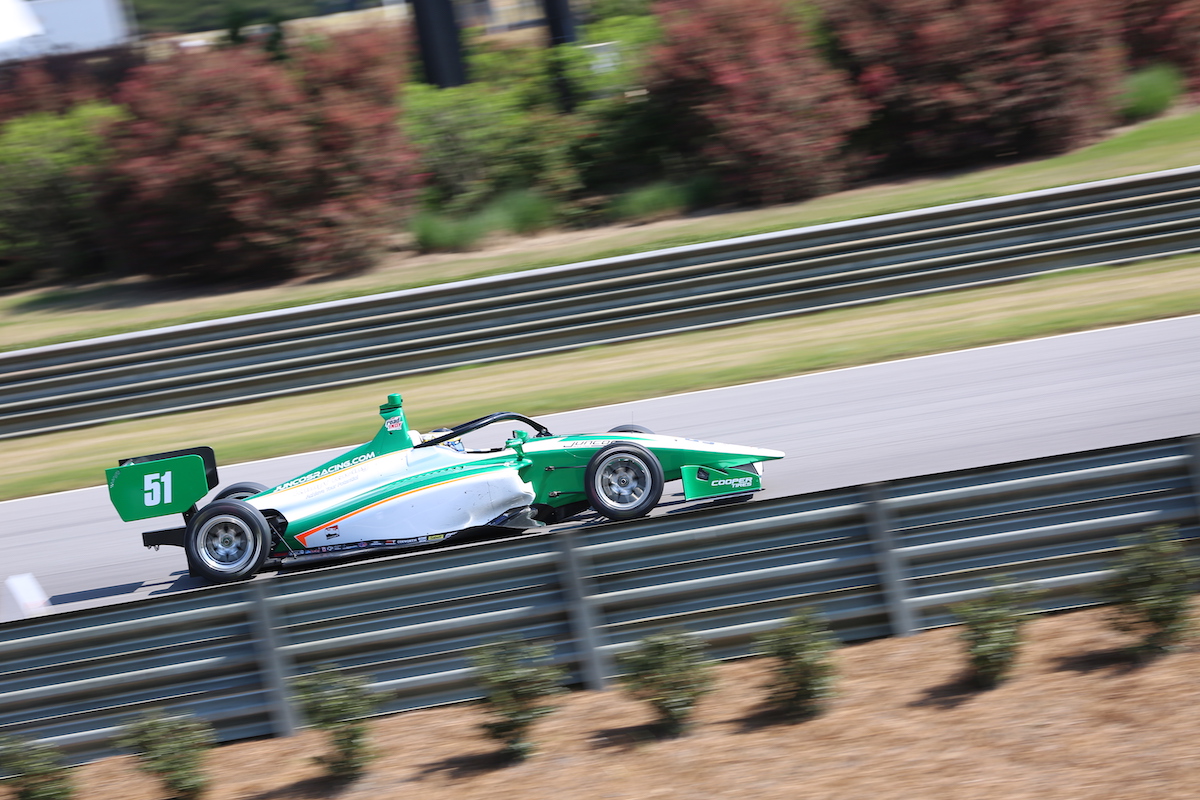 Andretti Autosport’s Robert Megennis finished not too far behind Sowery in 2019, and got to the top step of the podium as a rookie first, and he is with the team widely considered to be the strongest in the series. What’s more, Megennis stayed racing in 2020. He came 18th in Intercontinental GT Challenge in a Honda NSX GT3 Evo, raced a LMP3 prototype in the European Le Mans Series and now has a plum Lexus seat in IMSA. In challenging himself elsewhere, he’s now stronger for Indy Lights.

The only other returnee is HMD Motorsports’ David Malukas, whose solid run to second in Formula Regional Americas last year was rather overshadowed by the dominant title run by Global Racing Group’s Linus Lundqvist. Those two teams now combine to field Lundqvist in Indy Lights, and so far that amalgamation is being as potent on track as it sounds as Malukas and Lundqvist comfortably set the pace in the pre-season test day at Barber Motorsports Park, where the season starts.

Lundqvist’s drive comes as part of a Honda Performance Development scholarship for being FRegional champion, and there are two other scholarship winners on the grid in the form of the last two IP2000 champions.

Kyle Kirkwood lines up with Andretti and is tipped by many to continue the domination he’s displayed in his junior single-seater career to date, having won the United States Formula 4, FRegional Americas, USF2000 and IP2000 titles. It almost felt like he was bound for a 2021 IndyCar seat before COVID-19 arrived, and instead he’s diversified as he raced in the IMSA Prototype Challenge last year and is now team-mate to Megennis at Vasser Sullivan Racing in IMSA.

Sting Ray Robb succeeded Kirkwood as IP2000 champion and is a unique grid addition in that the vast majority of his car racing experience has been in IP2000. It took him 49 races to win in the series, but he added six more to claim a surprisingly dominant title. The step up to Indy Lights will mark his third straight season with Juncos, which should help him adapt.

Devlin DeFrancesco and Danial Frost finished second and third to Robb last year, and they both graduate with Andretti. George Steinbrenner IV co-owns DeFrancesco’s entry, as he did in IP2000, while Frost got to know Andretti through a part-season in FRegional. The latest IP2000 graduates could all win races this year, but only DeFrancesco looks title capable. 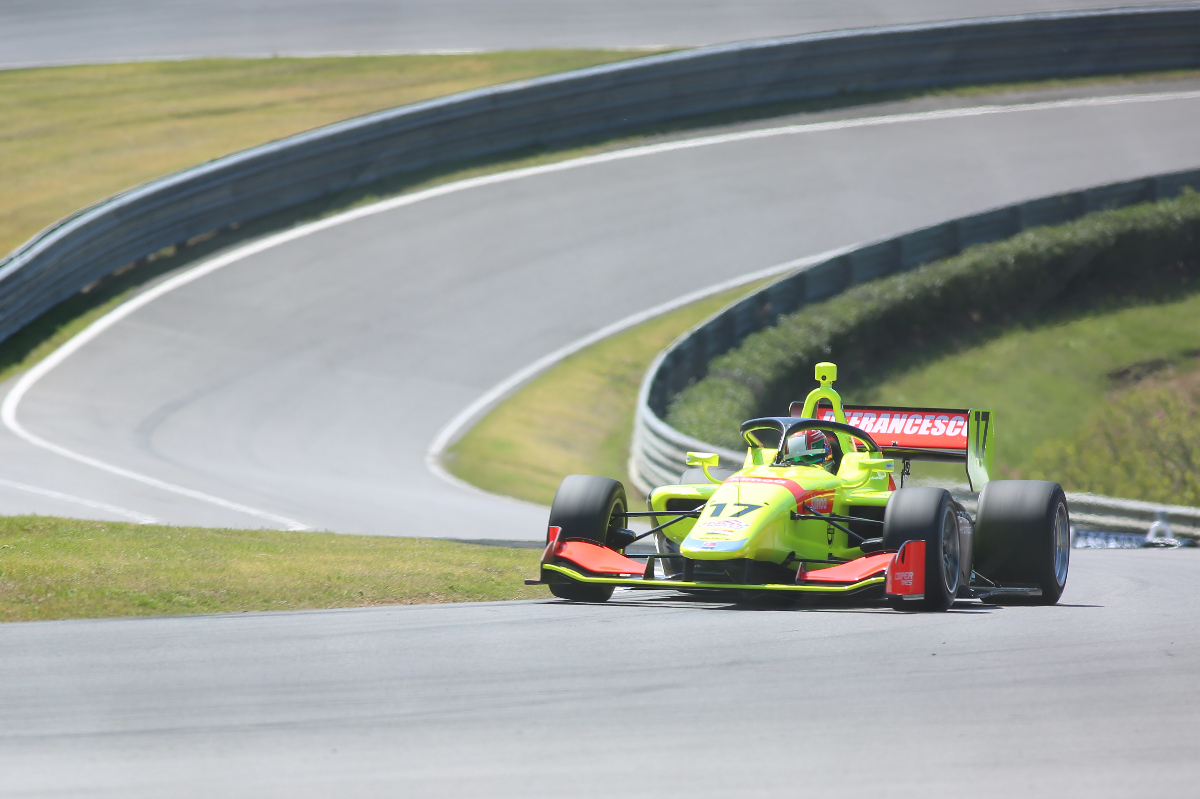 The other dark horse for success is Alex Peroni, who comes from two seasons in the FIA Formula 3 Championship and has an envious street circuit record of wins in Monaco and Pau. He is racing for the returning Carlin, and the British outfit has teamed up with Jay Howard Driver Development to field his car.

Travel restrictions forced RP Motorsport out last year after taking Kirkwood to the 2019 title, but it returns now with a formidable line-up consisting of Enzo Fittipaldi, whose car will be co-run by Andretti, and Enaam Ahmed.

Both drivers have proven themselves in Europe but are yet to taste what America has to offer in terms of challenge, but as Ahmed is a race-winner in FIA European F3 and Super Formula Lights you’d expect him to find the transition to the IP2000 car no problem at all while Fittipaldi has enough family members to lean on for tips on how American teams operate that he should also seamlessly move onto the Road to Indy.

The highest placed 2020 returnee is Artem Petrov, who moves to Exclusive Autosport after winning two races with Juncos last year. Switching teams may be costly given Juncos’s title-winning pedigree, and fellow two-time race-winner Manuel Sulaiman takes a place at Juncos after previously driving for DEForce Racing.

That means it could be stability that is the most rewarding. Pabst Racing has retained 2020 season finale winner Hunter McElrea, while Exclusive has brought back Braden Eves after his 2020 campaign was shortened by injury. Those two fought hard for the USF2000 title the year before that and they certainly have the ability to be rivals at the front again now.

Sulaiman was fastest in Spring Training at Barber, ahead of JHDD’s Christian Rasmussen. As reigning USF2000 champion, Rasmussen will be fighting for top rookie honours with the RP drivers but that could also make him a contender for the title as JHDD gets ever stronger with its RTI programmes. 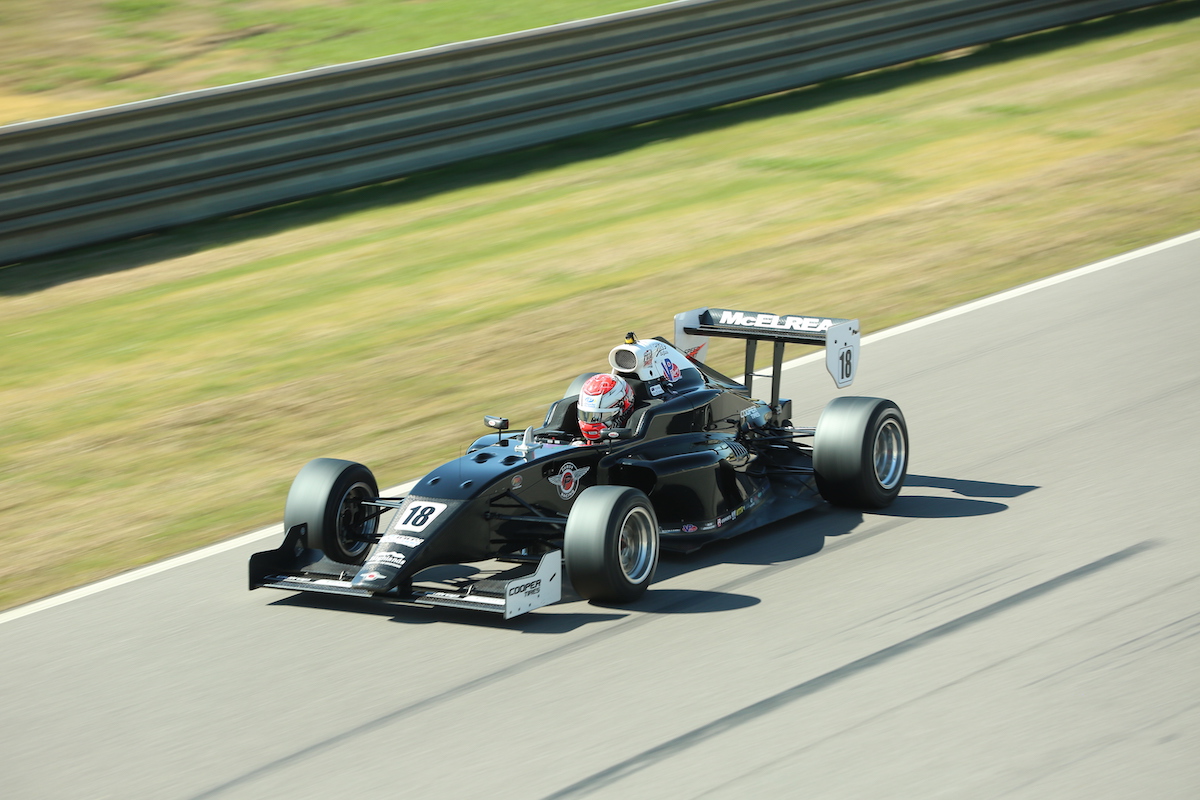 Third fastest in testing, and already getting his 2021 off to a strong start by dominating the Formula Regional Americas season opener, was Juncos’s Kyffin Simpson. His inexperience suggests he won’t be fighting for wins, but this year could really be a breakout one for the Cayman Islands-based Barbadian. A rival in both series for him will be Velocity Racing Development’s reigning US F4 champion Hunter Yeany, who didn’t have the strongest start to his FRegional campaign.

A surprise package in IP2000 this season may be Turn 3 Motorsport and James Roe Jr. The Irish driver and Irish-run team could be a very potent combination, but being a one-car team will be a disadvantage in such a competitive championship.

There are two drivers who immediately stand out as title contenders in the Road to Indy’s bottom rung: Cape Motorsports’ Michael d’Orlando and Exclusive’s Christian Brooks.

D’Orlando contested a part-season in USF2000 in 2018, but rather than try to build on that he moved over to United States F4 for 2019. His return to the RTI last year with Cape was a total success though, learning from some very talented team-mates and racking up five podium finishes that included a first win in single-seaters.

His sole team-mate in Cape’s main team this year will be Canadian karter Thomas Nepveu, who made a splash with victory on his single-seater debut in NACAM F4 last September but will have a whole new challenge ahead of him in USF2000.

Cape will now also co-run two cars with Ignite Autosport, an extension of a karting programme at Gateway run by kart manufacturer Margay Racing. The two drivers picked for those cars are Spike Kohlbecker, who came third in US F4 in 2020 and was previously a star in Formula Ford 1600, and recent single-seater debutant Evan Stamer.

Departing Cape for Turn 3 is Josh Green, who started strongly but didn’t deliver on his promise last year. 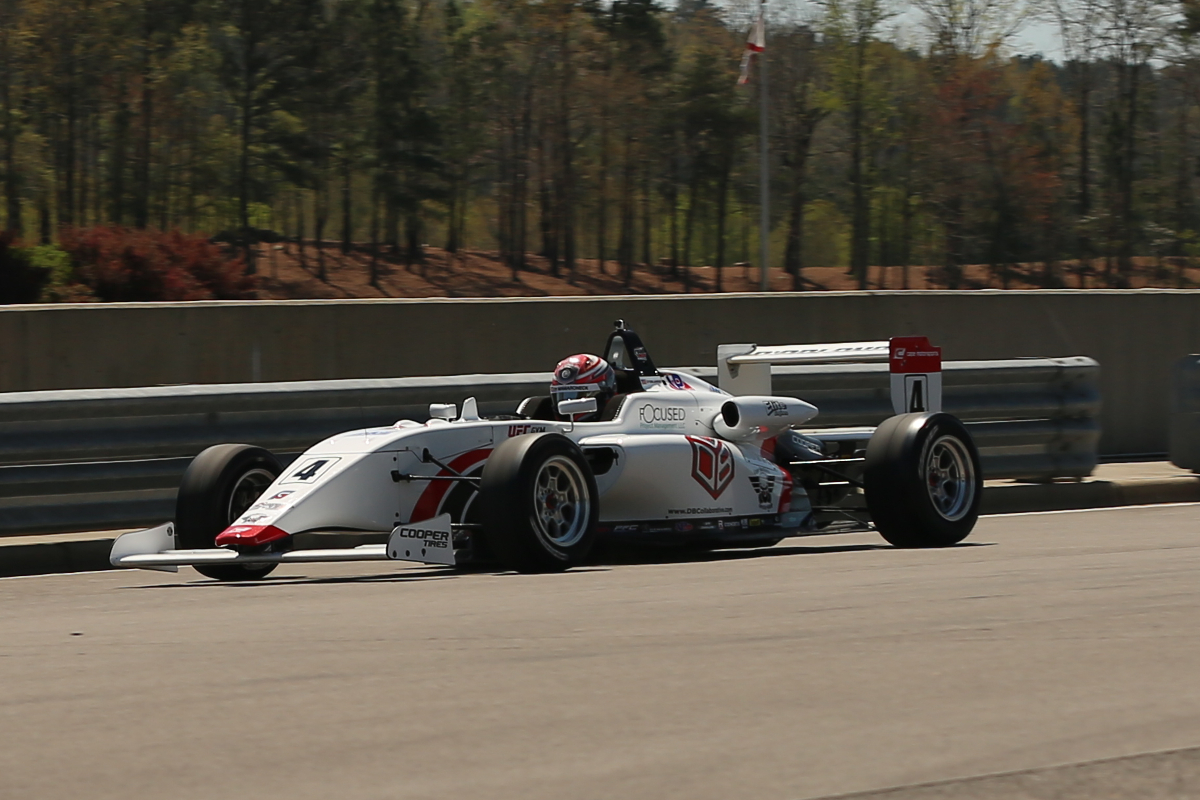 Brooks meanwhile has a massively diverse motorsport background that includes karting titles, coming runner-up in the Lites category of Global Rallycross and the Americas Rallycross Championship, finishing third in US F4 and then being a consistent frontrunner as a rookie in USF2000. He was also fastest on both days of official pre-season testing.

Another name to look out for is DEForce’s Kiko Porto, who despite missing two rounds managed to come 10th in the 2020 standings, claiming a win and two poles, a qualifying tally bettered only by Rasmussen and title runner-up Eduardo Barrichello.

He’s in a strong DEForce line-up alongside Prescott Campbell and Nolan Siegel, who were second and third fastest in testing, and they could quite easily take points off each other during the season.

There are two Toyota Racing Series stars on the grid, with 2021 race-winner Billy Frazer at Exclusive and New Zealand sportscar star Peter Vodanovich following up his taste of single-seaters in TRS with a seat at JHDD.

It’s also worth mentioning the African American-led Force Indy team and its driver Myles Rowe. An an all-new outfit, the team is a bit of an unknown but through IndyCar’s Race for Equality & Change programme will receive support from IndyCar powerhouse Team Penske, and Rowe is highly-rated by IndyCar champion Will Power from his karting years in addition to being a consistent winner in the single-seater racing he’s been able to take part in so far.