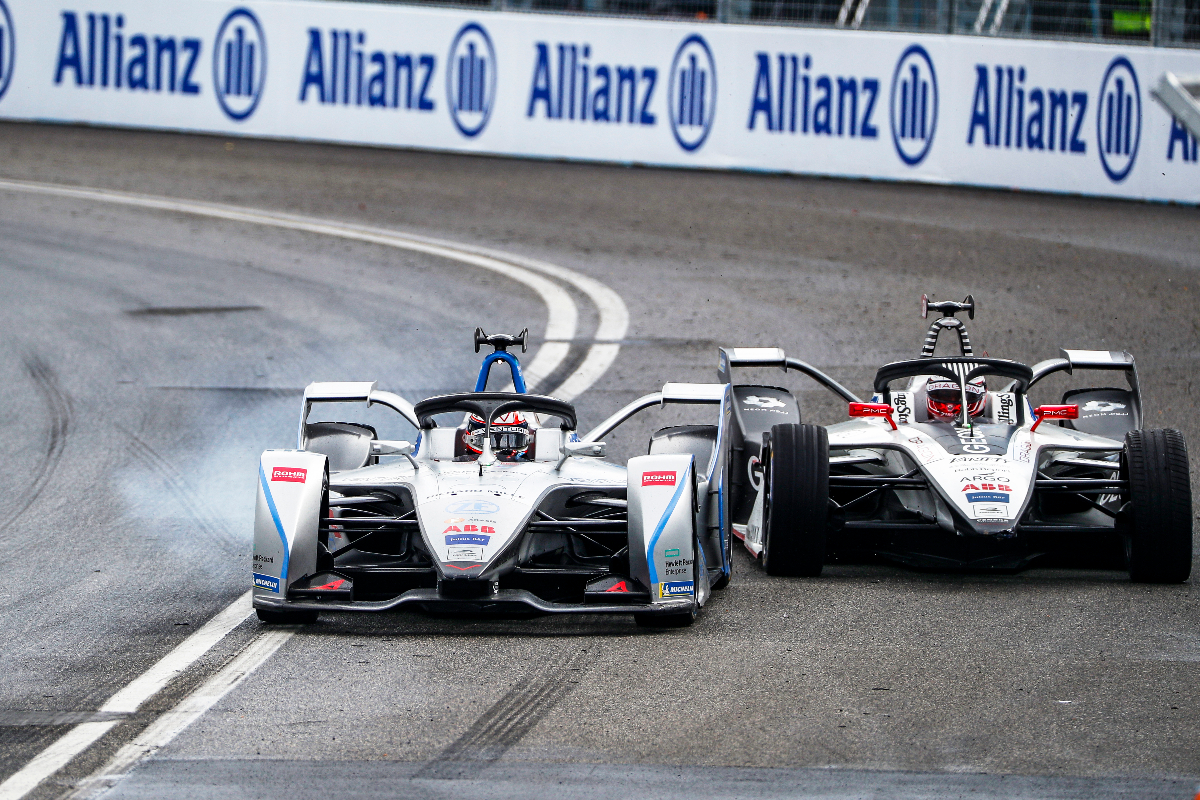 “If my grandmother had wheels she would have been a bike,” so goes a famous British television moment. And because a Formula E car has an open cockpit and one seat, it makes it a single-seater, right? Maybe not

The 2020-21 Formula E season returns to action this weekend on a revised version of its popular undulating Rome street circuit, while the world’s first electric junior single-seater series ERA has announced its first driver. IndyCar has finally started testing its hybrid systems, and Formula 1 may be increasing its reliance on electrical power with its 2025 regulations.

Everywhere you look, electric power delivery seems to be the way forwards regardless of how or where its generated. Some like to distance electric racing from its internal combustion engine counterparts, making it out as its own disicipline and usually out of spite. But such is FE’s complexity it raises the point if it can really be grouped with the rest of single-seaters.

“There’s a lot to look at, a lot to keep your focus on,” reigning champion Antonio Felix da Costa explains. “All the information you have on the steering wheel, the energy management, the other drivers you are racing, the information coming from the team; you have to be aware of what is going on around you.”

That doesn’t sound too dissimilar to the demands of street circuit-visiting series like F1 and IndyCar, or the importance of fuel-saving in Super Formula, but the setting this takes place in – the FE Gen2 car – is totally unlike anything else.

Multi-gear transmissions are used in FE, but you can wheelspin in any gear with the linear torque curve and if the brake bias ratio between actual braking and regenerative braking isn’t right you can spin on straights too. The regen loses efficiency as the battery gets hotter, and is impacted by other environmental changes too, meaning drivers can be changing the brake bias every lap to keep on top of energy harvesting and the car’s handling. That of course means previous braking references change pretty quickly, and why it’s so easy to lock up the front tyres. ‘Finding a rhythm’ is always changing in FE. 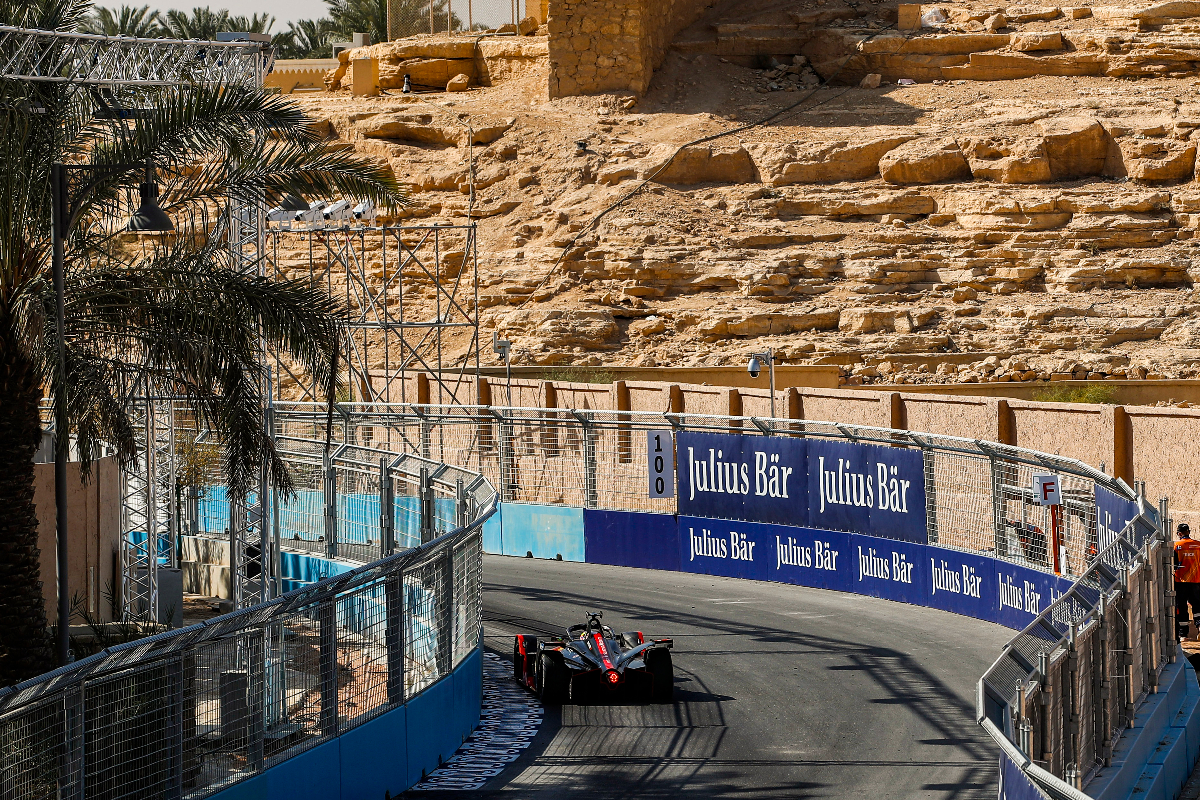 And while you can simulate the thermal and performance changes virtually, FE events are usually one day long and there is very little track time to learn circuits’ grip levels, surface changes and kerb harshness.

What FE does with its format deliberately plays up the difficulty the car presents to drivers and teams, and radio chatter can go on for minutes as debriefs essentially occur live in the car to speed up development when there is limited data sharing.

The driver eyeline is very low like with other single-seater cars, but not a single wheel is visible as all four are covered by bodywork. This not only makes it harder to spot lock-ups, putting more reliance on feel until a reel of smoke appears in either the corner of your eye or your mirrors, but also means its hard to judge steering and suspension damage as the angle of the wheels are unseen. The Gen2 Evo car, currently set for use only for the 2021-22 season, will expose the front wheels.

There’s one more huge factor that makes the FE car unlike anything else at the top levels and further distances it from the junior single-seater cars of today: the qualifying spec car is quite different to what drivers are equipped with in the races.

Mahindra driver Alexander Sims, formerly of BMW Andretti, explained it best in his blog on racing in the series.

“On Saturday morning in FP1 you go out on 200kW, which can feel fast after 110kW in shakedown,” he wrote.

“We go straight into energy running and also have one lap in each practice session for running the two higher power levels. Having just two laps on 235kW and 250kW power levels doesn’t give you adequate preparation time, especially when you’re running on a circuit that’s changing and you’re still making set up changes.

“Typically, in other motorsport series, you qualify with low fuel levels and on new tyres, which gives you a weight advantage and a boost in grip. However, in FE we have the same level of weight – a fully charged or empty battery weighs the same – and the tyres don’t have a peak performance window when new; they are pretty stable throughout their lifecycle. When you switch to 250kW for qualifying, rather than attacking you have to try and manage your driving quite carefully. You need to pull back your braking points, braking earlier than you would have on the 200kW push laps.

“That’s a pretty strange dynamic to go out there in pursuit of the fastest lap time, but pulling back and being more careful on the throttle while doing so. With the extra power, it’s really easy to be too aggressive and spin up the wheels, which can overheat very quickly.”

The cars race with 200kW, with two four-minute uses of 235kW power in ‘Attack Mode’, and it’s totally down to the drivers to know when to coast or to use more regenerative braking. Sims isn’t alone in describing it as “totally unique” within racing.

Would those who have raced it even call it a single-seater? Formula Scout asked former NIO driver Tom Dillmann.

“It’s a single-seater because it has one seat, but it has no downforce, it has no slicks,” he said. “It’s very low grip, it’s even less grip than a GT so it’s very different, and no aero. It’s all about mechanical grip, so the way to drive is quite different.

“Of course it has a steering wheel and pedals, but it’s very specific way to drive first of all, and I’m not even talking about races where you have to save a lot of energy etc.

“The tyres are all-weather [a grooved single compound], so they are also very difficult to get temperature in them. It’s an amazing tyre because when you think of it the window is amazing. What Michelin did is great. You go to a full-dry 50°C Tarmac in Santiago, to a 10°C full-wet in Paris and you can race. So it’s quite impressive the window. But of course it’s not ideal either in the dry or in the wet compared to what you’re used to. It’s tough. But it’s cool. It’s the same for everybody. 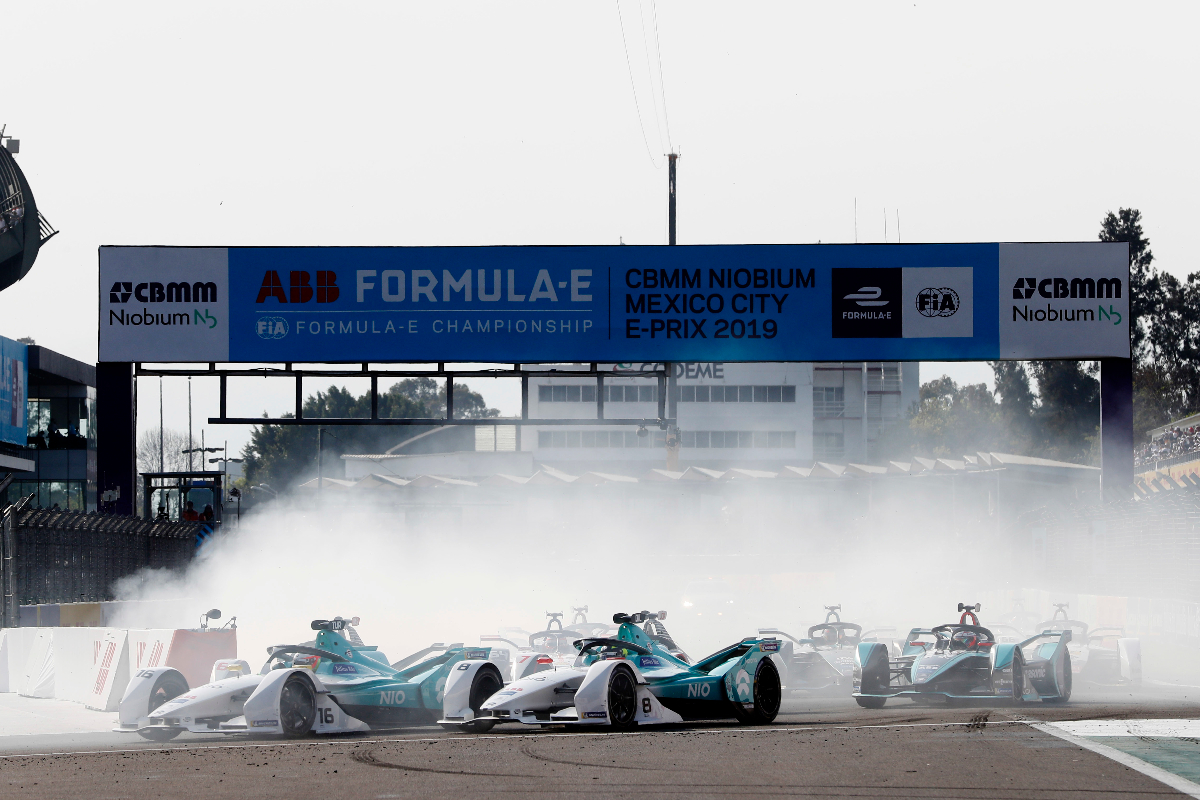 “[Back in] season five you could see a lot of teams had some traction control, some good ones, which you could find a way within the regulations.”

This links back to the issue of wheelspin, and the regenerative braking can actually heat up the rear wheels and decrease their grip too. FE has a ban on traction control, and the FIA cracked down on mimicking systems last season, but the science is still there for teams to subtly find ways of getting extra grip again and they’ve no doubt been working on new tricks ever since.

“It’s very minimal, it was not like a full traction control but in season five there were some teams that were a bit more advanced in this,” Dillmann explained. “So you could see as soon as it was wet, they were strong. And some teams that had nothing, and they were really, really struggling.

The instant torque from the electric motor means drivers can’t rely on sound in the same way as a conventional single-seater either. In F1, an internal ‘bleep’ system in the headphones is used to optimise gear changes, and drivers in the junior ranks will listen to the revs of the engine to determine when to change gears and of course if the engine is sounding healthy.

Not only are drivers having to use different skills in FE, but apply their senses differently too, and the perception of speed is far greater due to the closeness of the street circuit walls. Their surroundings are more difficult to determine too, with high-rise buildings or other local landmarks casting shadows that when crossed at speed will come across like a strobe effect in the car. And because of the one day format, those shadows will be in different places in different sessions. 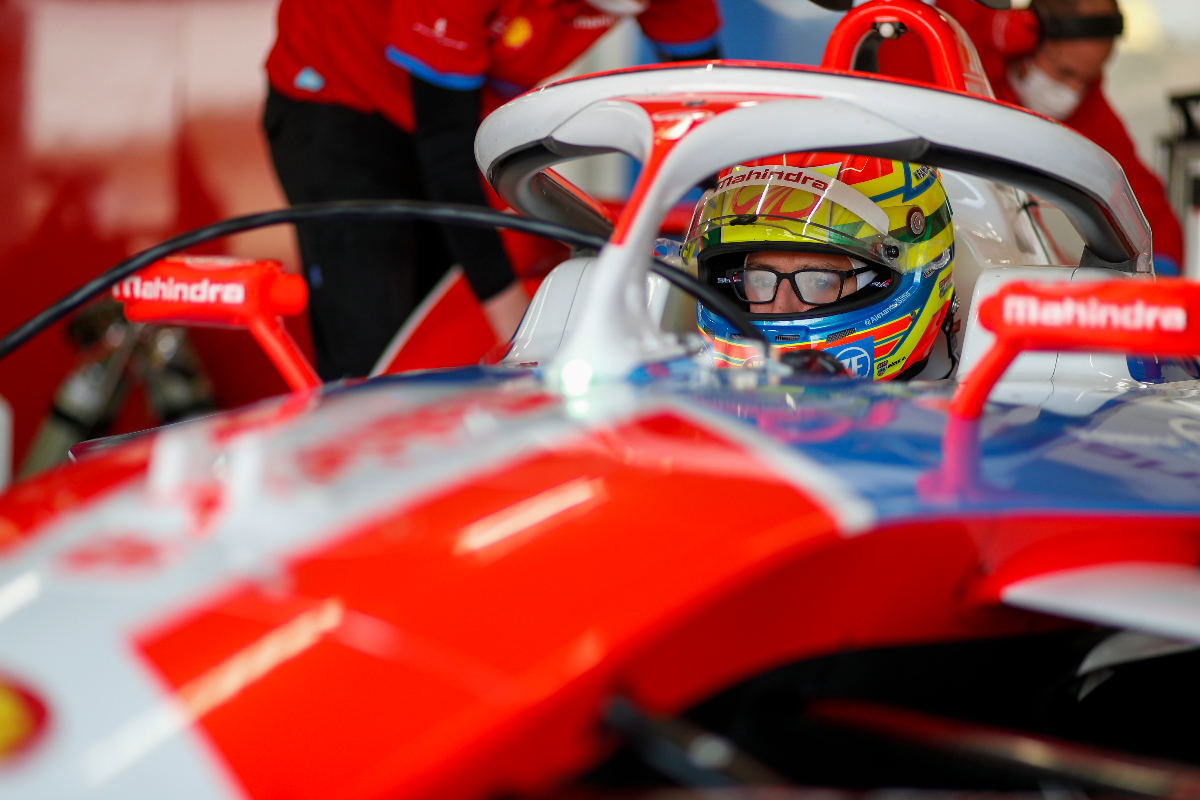 With all these challenges, you would think FE drivers would want to be cautious. But backing off doesn’t help in the long run like it would in any other single-seater, as “if you over slow the car then you need to get back on the accelerator and use the energy that you’ve just recuperated”, Sims explains.

Much of the aerodynamics are cosmetic or to reduce the disruptive airflow so drivers can race closely, and losing a wing doesn’t make the car undriveable. It does however attract the ire of stewards, particularly once the Gen2 car arrived in 2018 and pitstops were dropped from races as too many overtakes were involving tactical contact with other cars.

“Season five was really dirty, the problem being there was no pitstops and you knew that you could be really aggressive and the only way was that,” Dillmann told Formula Scout.

“And also as soon as you were getting a safety car, the race was getting flatout. So to overtake was almost impossible without contact. So since they reduced the energy when you get a full course yellow or safety car from season six on, then you are always coasting. So you don’t need to go so crazy to pass someone, you’re going to have a chance with the coasting and all that. For FE, flatout without coasting, to pass without contact is impossible. It’s like any street circuit in any car.”

Contact is discouraged and penalised far more severely in the junior series, while FE has really harsh penalties for small sporting and technical discrepancies relating to the usage of power and the brakes, and the whole style of racing is so detached from that FE requires that makes adapting to the series even harder as teams rarely simulate wheel-to-wheel action given so much of the simulator time is dedicated to car development and learning brand new circuits.

“I’ve always said FE is one of the best things that’s happened to drivers in the last few years, because it added 24 seats for professionals,” added Dillmann.

It’s more than just professionals that star in FE: it’s the drivers in the absolute elite tier of on-track ability. And yet, former full-time F1 racers now make up less than a quarter of the grid. Teams are instead often looking to junior single-seaters for fresh talent, with Formula 2 graduates Nyck de Vries, Maximilian Gunther and Sergio Sette Camara all adapting and proving their worth most recently.

F1 will probably remain as the pinnacle of single-seaters, because Formula E is venturing further into occupying a space beyond those confines.

More on Formula E
How an F3 job helped Tom Dillmann’s way from soapboxes to sportscars
Podcast: Young drivers, Formula E, and the future
The rise and fall of the original Formula E
Pedro de la Rosa at 50: An under-the-radar motorsport icon
Formula Scout’s Class of 2019