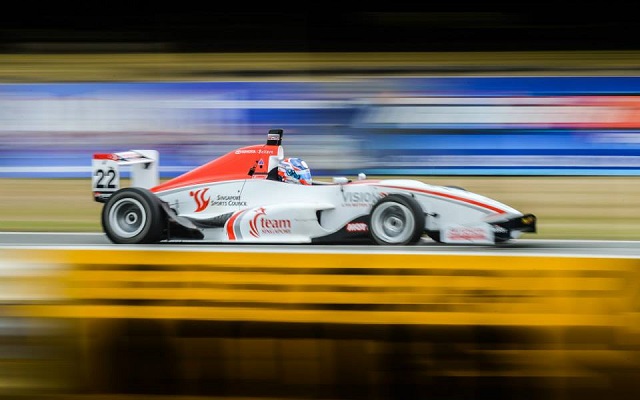 Neale Motorsport’s Andrew Tang picked up his second victory of the 2014 Toyota Racing Series season, having inherited the win in race three at Timaru.

Indeed, the Singaporean did not wind up leading a single lap, as he settled into second from his front row stating position, with championship leader Martin Rump setting the race pace at the front end.

The duo were unmatched on raw speed for the duration of the race, quickly establishing and maintaining a gap of several seconds over their nearest rivals. As Rump comfortably led all 20 laps, Tang stayed within a reasonable distance behind the leader and crossed the line less than two seconds adrift.

Ready to celebrate his maiden victory, the championship leader was then informed of an earlier false start and given a post-race penalty of ten seconds, dropping him to fourth.

As such, with Tang moving into first, it was Jann Mardenborough, having spent the entire race under immense pressure from James Munro, who secured the final podium position.

While it was a rather quiet and incident-free final race, there were still a number of retirements throughout the field. Macauley Jones was ruled out of contention on lap one, while Egor Orudzhev had a mechanical failure six laps into the race while running in fifth.

As it stands after two rounds, Rump leads Mardenborough in the standings by eight points, while Orudzhev remains in third.