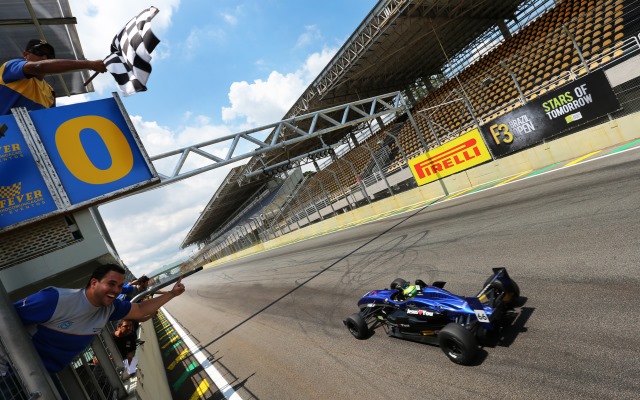 Felipe Guimaraes has won the 2014 F3 Brazil Open at Interlagos.

After an eventful pre-final race, the Brazilian cruised to an easy win on Sunday at Interlagos and secured back-to-back titles in the January event.

Due to two penalties on Saturday, Guimaraes started the final race only in fourth, but he was already in the lead after turn one. The Hitech man benefited from the fight for second place between Victor Franzoni and Dhzon Simonyan, allowing him to extend his gap and cross the finish line 12.2s ahead of his teammate Franzoni.

Franzoni finished second after a late battle with Simonyan. The Russian driver, who started last after a collision in the pre-final, had a good recovery race and passed the Brazilian on lap 16. However, Franzoni retook the second place with a move at turn four and finished as runner-up to Guimaraes. It was also a one-two finish for Hitech Racing.

Raphael Raucci was fourth after a late pass on Artur Fortunato. The Cesario driver lost his position, but inherited the Class B title after a mechanical failure in Leandro Florenzo?s car just two corners from the finish.

Lukas Moraes did not match his Saturday pace and finished sixth, followed by Victor Miranda and Nicholas Silva. Florenzo retired, while Fernando Galera did not start due to a gearbox failure in his car.