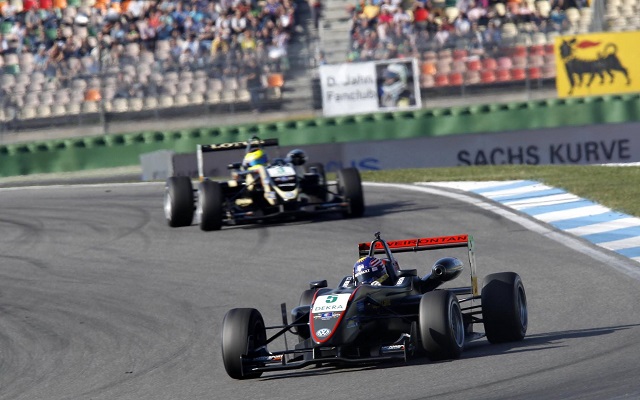 Malaysian racer Weiron Tan picked up his second victory in German F3 in the final race of the 2014 season at Hockenheim.

Starting in fifth, Tan managed an excellent getaway from the grid to put himself in prime position for victory when his compatriot Nabil Jeffri retired with mechanical issues.

Indeed, it looked like a straightforward race for the Motopark driver early on as Jeffri started well from pole and fended off Tan to establish a solid lead after lap one.

He would continue to comfortably maintain the gap to second over the opening stint, but, on lap six, a cloud of smoke erupted from Jeffri’s engine at Parabolica, forcing him to pull over and call it a day.

As such, Tan inherited the lead with a fair bit of the race to go, but, despite some pressure from Indy Dontje, it was a straightforward affair for the Malaysian until the checkered flag.

With Dontje settling for second, Tan’s Van Amersfoort Racing squadmate Sam MacLeod finished third. The Scotsman was under attack by Markus Pommer midway through the race but was left to comfortably cruise to third after mechanical issues forced the reigning champion into the pits.