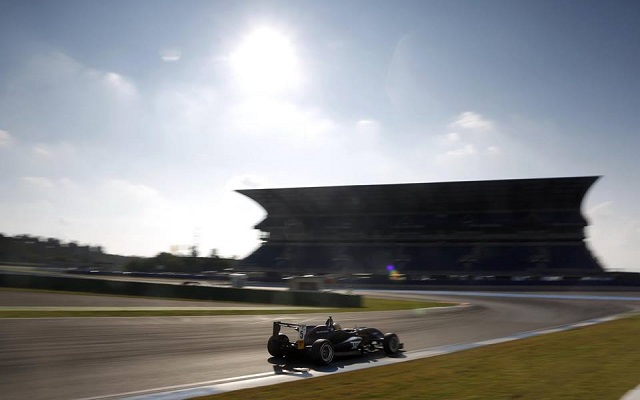 Having achieved his first podium in the German F3 series during the previous round at Sachsenring, Weiron Tan celebrated his maiden victory in the first race of the Hockenheim finale.

The Malaysian took over in the lead on the opening lap and drove a controlled race to end up on the top step of the podium.

Starting from fifth, Tan made his way up to second off the line, slotting in behind poleman Indy Dontje as Nabil Jeffri and Markus Pommer bogged down from second and third respectively.

The Van Amersfoort Racing driver was on the Dutchman’s gearbox right away and passed him for the lead into the hairpin.

Further down in the field, Nikita Zlobin missed his braking point in the very same corner and ended up taking out Sam MacLeod, which prompted a safety car.

The clean-up didn’t take long and the green flags were back out shortly thereafter as Tan continued to lead the field.

Behind him, series champion Pommer took second from Dontje and set out after the race leader, only to be made aware of a drive-through penalty for a track limits infringement.

Pommer did pass Tan for the lead after that, but had to then duck into the pits, rejoining in eighth.

From that point on, the Malaysian drove a calculated race, keeping Dontje at a safe distance as the latter came under pressure from Jeffri.

Eventually, Tan finished 2.5s clear of Dontje to claim his first win in the series.

In the final minutes, Jeffri was unexpectedly overtaken by Nicolai Sylvest, who then subsequently held off the Motopark driver to complete the podium.

Pommer fought his way up to fifth, while teammate Andres Mendez overtook ADM’s Konstantin Tereshchenko for sixth on the penultimate lap. Maximilian Hackl, Nikolaj Rogivue and Luca Iannaccone made up the top ten.

It was a rough debut for EuroInternational’s Nicolas Beer, whose car stalled off the start and who was then handed a drive-through for taking an incorrect position on the grid. The Dane wound up retiring from the race with six laps to go.

UPDATE: Nicolai Sylvest was excluded from the classification in the aftermath of the race, promoting Jeffri to the podium and Rogivue to reverse-grid pole for race two.