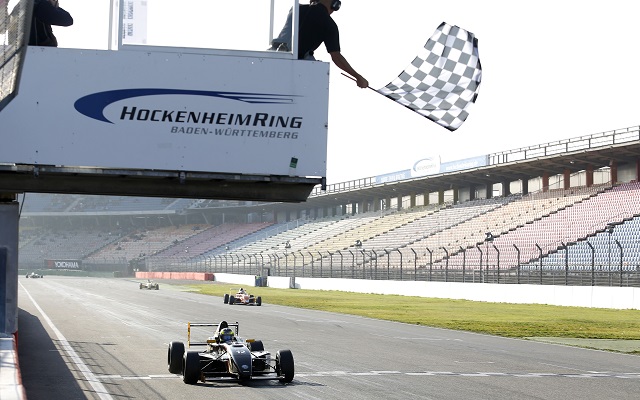 Dennis Marschall?was triumphant in ADAC Formel Masters race one this morning at Hockenheim.

The German timed his run to perfection, passing fellow ADAC Stiftung Sport driver Maximilian Gunther for the lead on the final lap to take his second victory of the season.

Gunther, who started the race from pole, built up an early lead, while Marschall battled with champion?Mikkel Jensen, eventually passing the Dane on lap two.

The Lotus driver then set off after Gunther, gradually taking time out of his three-second advantage. He finally caught up on the last lap of the race and found his way past the Mucke racer.

Gunther tried to retaliate, but couldn’t depose Marschall and would have to settle for second place ahead of Jensen.

Gunther’s second place ensured that he will finish runner-up in the ADAC Formel Masters standings for a second year in a row. Meanwhile, Neuhauser Racing have been crowned teams’ champions with two races to spare.

Race two of the weekend at Hockenheim takes place this afternoon at 16:00 GMT, with Gunther getting another shot at victory as he starts from pole.