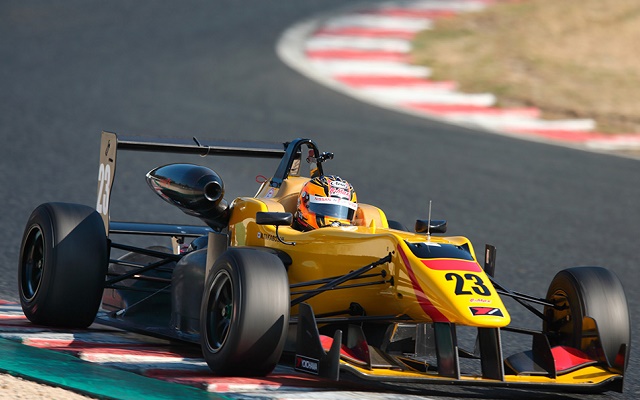 A clash between Petronas TOM’S frontrunners Nick Cassidy and Kenta Yamashita has allowed Mitsunori Takaboshi to take his fourth Japanese F3 victory in the Suzuka 2015 opener.

After a mixed weather qualifying, poleman Cassidy shared the front row with teammate Yamashita, the two getting away in sync and running side-by-side into turn one.

Cassidy maintained the lead around the outside and managed to pull out two seconds on Yamashita over two laps, the pair escaping from the rest of the field in no time.

The Kiwi looked set for a win on his Japanese F3 debut, but Yamashita, who won at Suzuka last year, soon began to eat away at Cassidy’s advantage.

By the penultimate lap, Cassidy’s lead was gone, with Yamashita trying to pass his teammate into the Casino Triangle.

But the Kiwi tried to force his teammate wide and left him no space, leading to a nasty shunt into the barriers for Yamashita.

Cassidy carried on and took the checkered flag, but post-race celebrations were muted and with good reason – he was soon handed a forty-second penalty and stripped of his win, ending up in tenth.

Ishikawa narrowly held off Tsubasa Takahashi for what would end up being second, while Takaboshi’s teammate and gamer-turned-racer Lucas Ordonez took fourth.

Nirei Fukuzumi stalled on the grid, having been set to start in fifth, but managed to fight back to claim his original spot in the end.