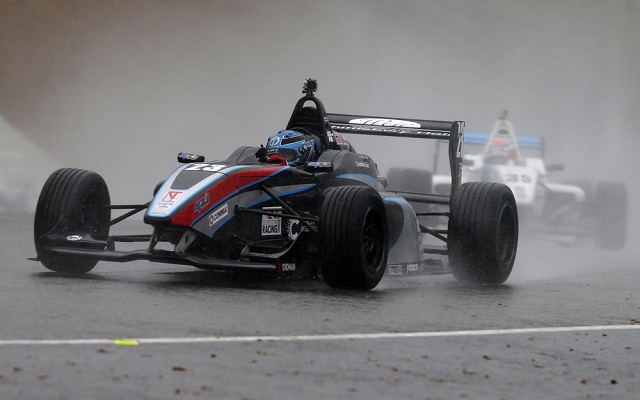 The 18-year-old driver will stick with the team for a sophomore season after finishing 11th as SWR’s leading driver last year.

With no karting experience, Albert started his single-seater career in Formula Ford 1600 in 2013 before graduating to BRDC F4.

The Northamptonshire racer finished all but two races of his debut campaign in the points and finally broke through onto the podium in the penultimate round at Donington.

In the off-season, Albert contested the BRDC F4 Winter Series, racking up five podiums to finish fourth overall. He also took part in a round of the MRF Challenge series, with a best finish of fourth.

“It’s good to be back with SWR this year to race in BRDC F4 once again,” Albert said. “I was pleased with my progress last year; however, I felt that my results didn’t show my true pace. It’s fair to say, though, it was a good year for me.”

“This year I have the experience I need to win the championship, the team and I have an amazing relationship and I know we are going to do great things. I’ve been working unbelievably hard over the winter so I feel more ready than ever.”

“We’re all absolutely delighted Jordan has re-signed with SWR for the new season,” said team boss Sean Walkinshaw. “He improved markedly last year and with a bit more in the way of good fortune he would undoubtedly have had more podiums and finished inside the series top ten.”

“He’s definitely going to start the year as a genuine contender for the championship, the speed is there and his racecraft is improving all of the time. We saw the big steps he made towards the end of last season and in the Winter Championship too, so we’re actually feeling pretty confident and really looking forward to working with Jordan again ? that was always the plan.”

SWR took four victories in the inaugural BRDC F4 season in 2013 through Matthew Graham and Jack Barlow. In 2014, however, the Oxfordshire team could only manage two podiums through Albert and EuroInternational’s new F3 signing Nicolas Beer.