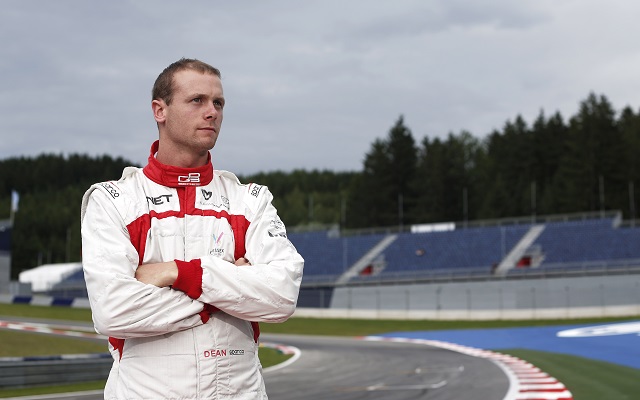 Dean Stoneman has been recruited by the Red Bull Junior Team and will race in Formula Renault 3.5 this year for DAMS as team-mate to Nyck de Vries.

Stoneman finished runner-up in GP3 last year in his first full season of single-seater racing since recovering from cancer.

With a total of five wins, he finished second only to fellow Briton Alex Lynn, who raced as a Red Bull Junior last year but split from the scheme over the winter to sign a deal with Williams.

After starting his career in Formula Renault 2.0 in the UK, Stoneman was the FIA Formula Two champion in 2010.

He had a prize Formula 1 test with Williams at the end of that year, and then secured a seat in FR3.5 with ISR alongside Red Bull protege Daniel Ricciardo, signing the deal just days before being diagnosed with an advanced form of testicular cancer.

?To be part of the Red Bull Junior Team has been one of my life goals and it is fantastic to be given the chance,” said Stoneman.

“You just have to look at the names that have gone before to see that only the best drivers get into the programme.

?I’m thrilled about the year ahead, to be in the DAMS team in World Series is a perfect opportunity. I obviously have all the support I need and we have a great build-up planned before the start of the season, plenty of time in the sim before track testing starts in about 8 weeks.

?I’m aiming very high, Carlos [Sainz] came from GP3 to World Series and won with DAMS last year. I think I showed last year in GP3 what I can do so I have no reason not to jump into Renault 3.5 and do well, get on the podium early and start racking up the points.?

Stoneman will be one of three drivers on the Red Bull Junior Team this year, joining Pierre Gasly who will also be with DAMS in GP2 (as team-mate to Lynn), and fellow new British recruit Callum Ilott, the European karting champion stepping into F3 with Carlin.

At DAMS, Stoneman will be team-mate to McLaren junior driver de Vries, who makes the step up after winning the Eurocup and Alps titles in Formula Renault 2.0 last year in dominant fashion in the double karting world champion’s third year in the category.

“I?m very pleased to be joining a great team like DAMS,” said de Vries upon the official confirmation of his step up.

“It has enjoyed so much success in the past few years, and it?s really impressed me by its professionalism and the quality of its work. I know that a lot is expected of Dean and I.

“Personally speaking, I feel I have to go through a learning phase that begins by getting to know the team and the car really well. Then I have to build up my experience in the championship without setting myself any particular aims in the opening rounds. But I intend to gather momentum in the second part of the season and score some top-three finishes.?

By racing for DAMS, Stoneman and de Vries follow in the respective footsteps of Red Bull’s Carlos Sainz and McLaren’s Kevin Magnussen, the past FR3.5 two champions.

?After our four titles in the last two seasons we must remain humble given the quality of our rivals, but we must not lower our sights,” said team boss Jean-Paul Driot.

“This is why I?m delighted to welcome Nyck and Dean to DAMS this year. They are both very talented drivers with very different career paths; they have considerable experience so they will really be a top-class duo.

“It?s also very satisfying to see that prestigious teams like McLaren and Red Bull continue to entrust DAMS with their budding champions. Thus, we?ve got the right weapons to enjoy a really great season in 2015 and defend our titles.?