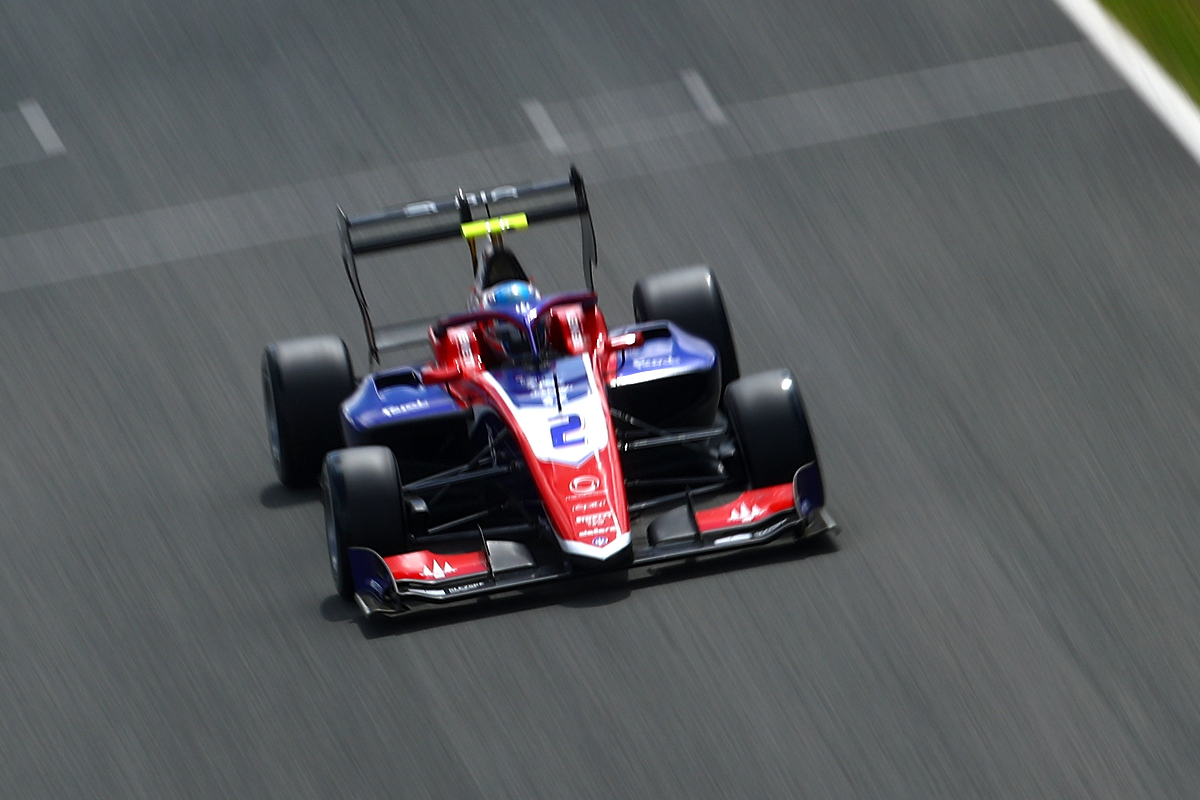 Overnight night left the track damp, but most of the field opted for slick tyre. Caio Collet was the highest placed of those on grooved tyres, with Franco Colapinto, Hunter Yeany and Pepe Marti also opting for the compound.

Those tyres were best in the opening stages, and Collet stormed through to the lead,with Colapinto not far behind. Both managed a good gap to the rest of the field but a drying track meant their tyre advantage quickly dwindled.

Still, the damp track provided a challenge and Francesco Pizzi span off, while Brad Benavides and Reece Ushijima made contact.

The safety car was brought out to clear Pizzi’s car, and Collet and Colapinto came into the pits for slicks.

Poleman Zane Maloney therefore reclaimed the race lead, but wouldn’t hold it for long. Marti and Yeany, still on wets, stormed through on the restart. The advantage wasn’t quite as much as it had been earlier in the race, and Maloney was able to challenge Marti for the lead, but couldn’t get past.

The race was neutralised again by a safety car when Benavides damaged his front wing by running into the wall. Marti and Yeany pitted, and Maloney led again.

Up until this point, Stanek had stayed close behind Maloney. He was preparing to battle his team-mate on the restart when Maloney spun.

Stanek now led, and came under pressure from Ollie Bearman as they restarted. He couldn’t hold on, being passed just before the race was neutralised to clear Maloney’s car.

The race’s second half was a battle between Stanek and Bearman, who was initially able to pull away. The gap gradually reduced, and Stanek seemed to have better tyres late on. He made multiple attempts to find a way through before finally passing on the penultimate lap.

He then pulled away, while Bearman dropped behind Jak Crawford.

Bearman had a train of drivers to contend with on the final lap, led by Gregoire Saucy. He managed to pull alongside and was almost ahead when Bearman lost his car over the kerbs and clashed with him.

Saucy spun out, and Bearman managed to hold on but dropped behind Isack Hadjar to finish fourth.

Arthur Leclerc charged up the order to fifth, ahead of Kush Maini.

Zak O’Sullivan finished seventh after a dramatic race in which he clashed with Carlin team-mate Enzo Trulli, taking him out of the race. Kaylen Frederick was eighth, scoring after his eighth place in the sprint race was lost to a five-second penalty for a clash.

After his early heroics, Collet finished 13th, while Colapinto was penalised 10s for being out of position at the safety car line on the formation lap.