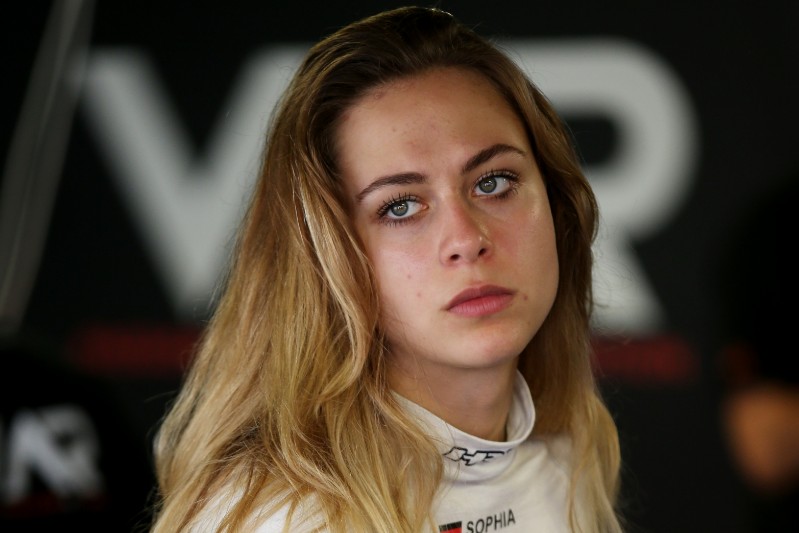 Breaking her spine in last year’s Macau Grand Prix was the least of Sophia Floersch’s worries heading into 2019, where a last-minute change of plans almost stopped her season, and Macau return, before it started

When lining her HWA Racelab-run FIA Formula 3 car on the grid for the 2019 Macau Grand Prix, it will be one year minus a day since Sophia Floersch’s neck and back-breaking crash in the same event.

Floersch crashed into Jehan Daruvala on the run to Lisboa corner after the Indian braked in reaction to signals suggesting there was yellow flags, leaving her with no time to react. Her car was then too damaged to control as it approached Lisboa.

That crash made headlines worldwide, as Floersch was spectacularly launched over the Lisboa kerbs, and TOM’S driver Sho Tsuboi, and into the elevated photographers’ bunker behind the catch fencing at over 150mph.

She was one of five injured in the incident, and underwent lengthy surgery on a spinal fracture the day after the crash.

The wider impact of the crash is the new look the Macau GP has this year, with FIA F3 Championship’s Dallara F3 2019 replacing the Dallara F317 previously used, a reprofiling of Lisboa and all-new barriers at several of Guia Circuit’s high-speed corners. As a result, the track had been upgraded to FIA Grade 2 status and the race has retained its World Cup status.

Floersch ran with Van Amersfoort Racing at Macau in 2018, continuing a partnership that had started earlier in the year in FIA European F3. She only contested two thirds of the F3 season, as she prioritised finishing her school education. 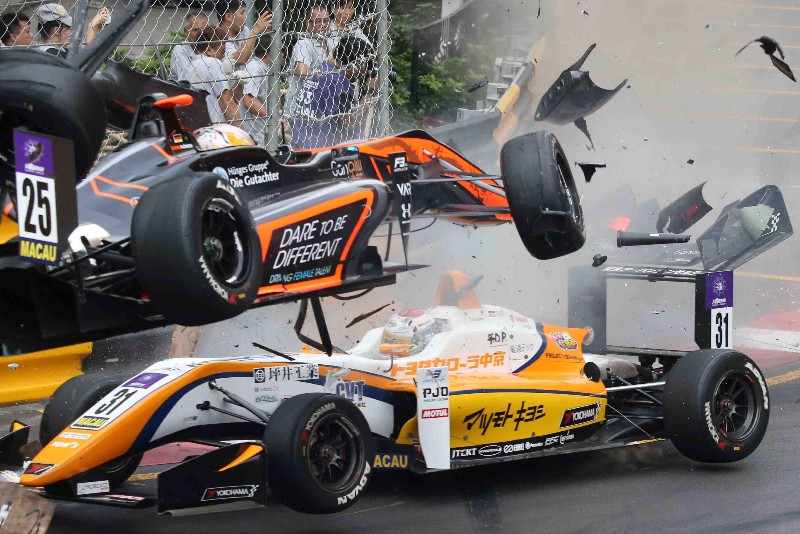 Budget was of course a factor too, having already had her first year in car racing – as a rival to Jamie Caroline and Billy Monger in the close-wheeled Ginetta Junior series – shortened by money issues.

“I would recommend Ginetta Junior to every single driver who is thinking about making the step to cars or staying in karting [an extra year],” says Floersch, who won two races and was fighting for the title before leaving mid-season.

Floersch’s Ginetta form was not replicated in two years of ADAC Formula 4, but despite a delayed start she was a points scorer in the notoriously competitive European F3.

Her form took an upturn at Macau, where VAR had made the podium the year before, but she qualified down in 20th place.

“I was actually higher up the order [on pace]. I was like top 10 in the free practice sessions. The only thing I had was in qualifying two I crashed, so that was the reason I was P20. No other reason. We were fucking quick actually.”

Only one place was gained in the qualification race that set the grid for the grand prix, which was red flagged due to her crash.

“I started P19 in that race, and after four laps I was already fighting Daruvala for P14. I think that?s quite good for a rookie.” 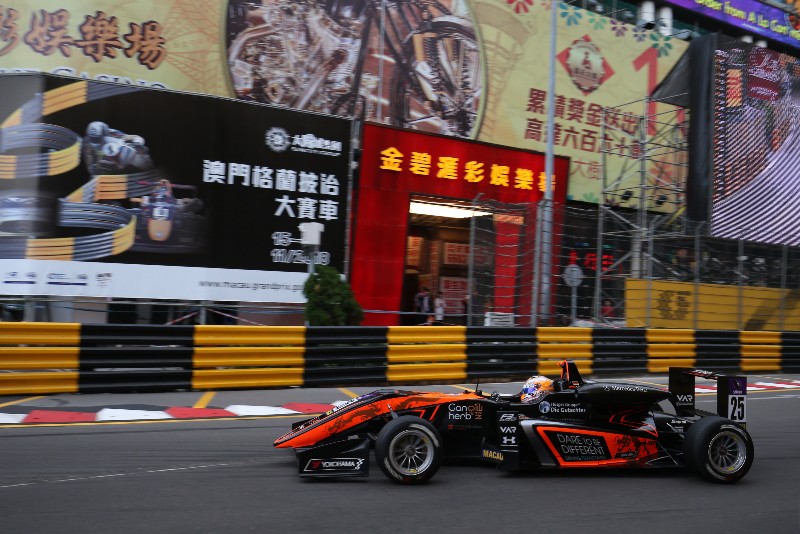 Floersch planned to continue her learning curve in the Dallara F317 with VAR in European F3 successor Formula European Masters. The decision had been made before her injury rehabilitation began, but by the new year she had been cleared to race. Three days before the first scheduled pre-season test though, FEM was cancelled and Floersch was left without a drive.

“The plan was to do FEM because I knew the tracks, I knew the car, the team knew everything as it did it for years. But then they cancelled it. For me it was clear that I wanted to stay with Van Amersfoort – just because we learned so much together last year and Macau we went too together. This was definitely the key for me, and then we searched for a good series.

“It was already late March, so there was nothing right. Everything we could have done was wrong. But I think this one [Formula Regional European Championship] was making more sense at that point.”

VAR placed its orders for FREC’s Tatuus T-318 chassis and confirmed its entry a fortnight before the season opener. After topping a open test in the Dallara F317 at Monza, her first time back in a car since her crash, Floersch got one day in the FREC car before the season began.

“At the beginning of the year we had no ambitions at all, because before Paul Ricard [season opener] we did one shakedown and that was everything. We had no test days at all, and I think given that we are getting really, really good.”

In a grid of 10 cars, Floersch was over three seconds off the pace set by Prema at Paul Ricard. While it shouldn’t have been surprising given the team’s limited mileage, both Floersch and VAR were taken aback by the gap. 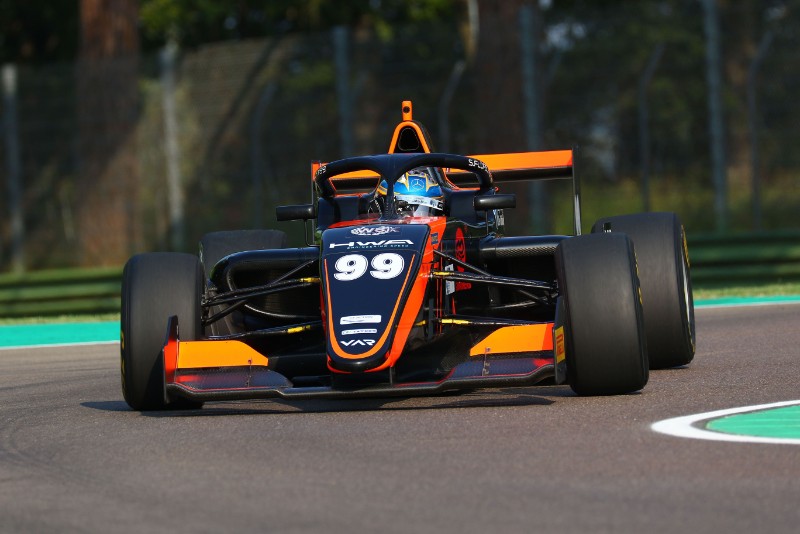 “Prema had three cars since November, so they?d been testing since November with three guys who actually can also drive. We had the cars one week before Paul Ricard and had one driver. We had nothing to compare, which is also the reason why Prema is still 1-2-3 the whole f***ing time.”

The stronghold over the top positions for Prema weakened during the second half of the season, while Floersch benefited from having Alexandre Bardinon and then two-time Macau GP winner Dan Ticktum join as team-mates.

On only one occasion did Floersch finish best of the rest, while Ticktum picked up two podiums in his debut weekend late in the season, often compounded by a poor qualifying pace in a car which proved difficult to overtake in, and technical gremlins.

At the Red Bull Ring, round four of eight, Floersch was on terms with Prema in free practice but failed to set a lap in qualifying due to a major clutch failure. Starting from 14th in each race, she came away with three top six finishes. In a test a few days later, the Alfa Romeo engine in her car then burned itself into an early death.

Highlights were few and far between for Floersch, who ended up seventh in the standings, but she took solace in that the Regional F3 car in use was closer to the one she’ll be racing in Macau this weekend than FEM’s Dallara F317.

“The Dallara F317 was 80kg lighter, had just so much more aero. With the T-318, it?s so heavy. The driving style is completely different. You have Pirelli tyres that make the driving completely different as well, because you have a real peak compared to FEM’s Hankooks, which are harder.. But I think it?s a good practice for next year, for FIA F3.” 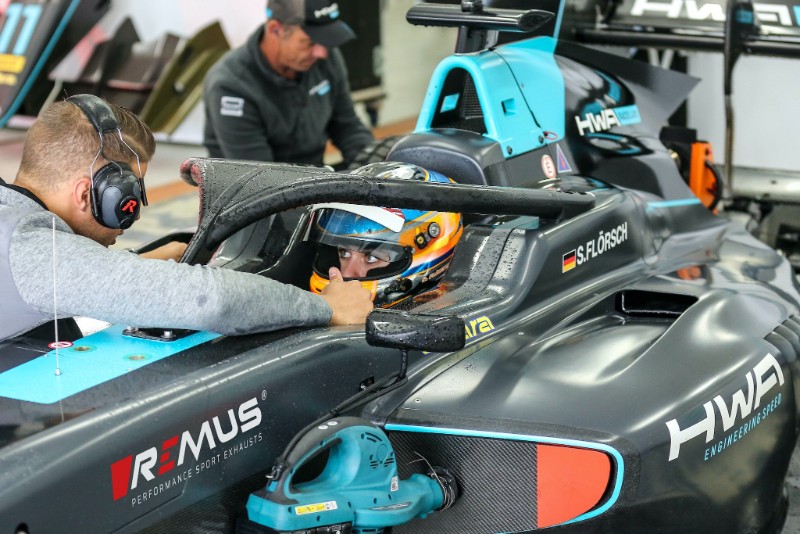 With no place at Macau for VAR, Floersch has joined the relatively inexperienced HWA. The German outfit has supported her career for the last two years, but only ventured into single-seater racing as a team at the end of 2018. And just like VAR, it’s only been able to give her one day in the FIA F3 car before Macau.

That came at a soaking wet Ricardo Tormo in the official post-season test, and she was 20th fastest out of 31 across the day. More impressively, she was just 0.805s off her massively experienced Macau team-mate Jake Hughes.

?I?m delighted to be driving in Macau again. Until my accident, it was the most amazing event I had ever contested.

“The track is incredible. It is so much fun to drive. After the accident, I knew I definitely wanted to return to Macau!”

Hughes has been one of the top drivers in his two Macau appearances, while HWA made an impact in FIA F3 thanks in part to his inputs. HWA CEO Ulrich Fritz is confident both Hughes and Floersch could be at the front this weekend as a result.

?I?m delighted to have Sophia in the team, for whom the track has special significance,? he said. ?Jake has already delivered good races here and is highly motivated ? he should be able to be up there fighting for the top spots.”

If Floersch’s Macau comeback does end with a finish in the top 10, or even the podium, then it will no doubt strengthen her claim to one of the team’s FIA F3 seats for 2020.