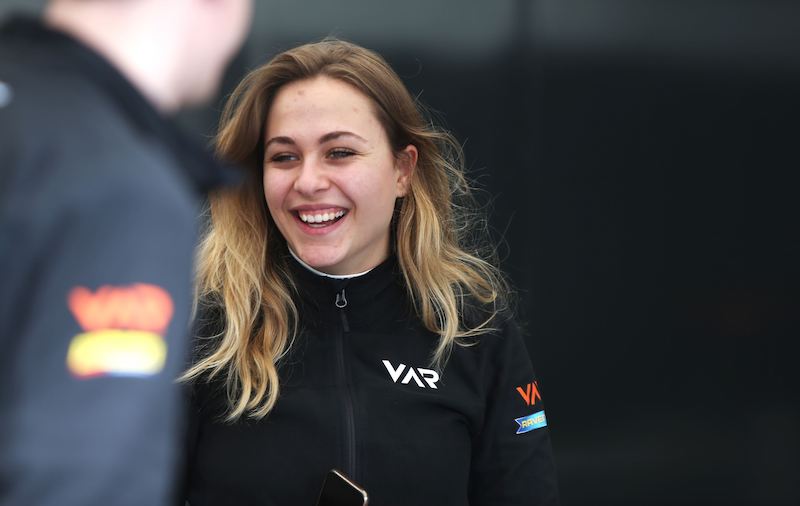 Sophia Floersch will contest the Macau Grand Prix with HWA later this month, returning to the scene of her huge crash in 2018.

Floersch suffered a fractured spine when her Van Amersfoort Racing car was launched into the air before hitting a photographer’s tower at Lisboa corner early in last year’s race.

She made a quick recovery, racing a full campaign this year in the Formula Regional European Championship with VAR.

Having targeted a Macau return, she will join HWA regulars Jake Hughes and Keyvan Andres in the German outfit’s line-up.

Floersch has enjoyed a strong relationship with HWA, which has included racing their Mercedes-badged engines in F3 in 2018.

?I?m delighted to be driving in Macau again. It was my first race there last year. Until my accident it was the most amazing event I had ever contested,” Floersch said.

“The track is incredible! It is so much fun to drive. It?s incredible in a Formula 3 car, I had a smile on my face every lap. After the accident, I knew I definitely wanted to return to racing and to return to Macau!

“The fact that I achieved that this year already shows that you can make your dreams come true when you believe in yourself and work hard at them.?

The FIA F3 Championship cars will be raced in Macau for the first time this year; Floersch has had a single day of running in the car with HWA in the Valencia test last month.

“I?m delighted to have Sophia in the team, for whom the track has special significance,” said HWA CEO Ulrich Fritz.

“Jake has already delivered good races here and is highly motivated ? he should be able to be up there fighting for the top spots.

“And not forgetting Keyvan: experience counts here, and he has plenty of it, and I?m confident that he will put in a good performance.?

After Enaam Ahmed joined the grid with Campos Racing – as confirmed by Formula Scout on Thursday – there are three spaces remaining on the 30-car entry list: one each with MP Motorsport, Jenzer Motorsport and Campos.