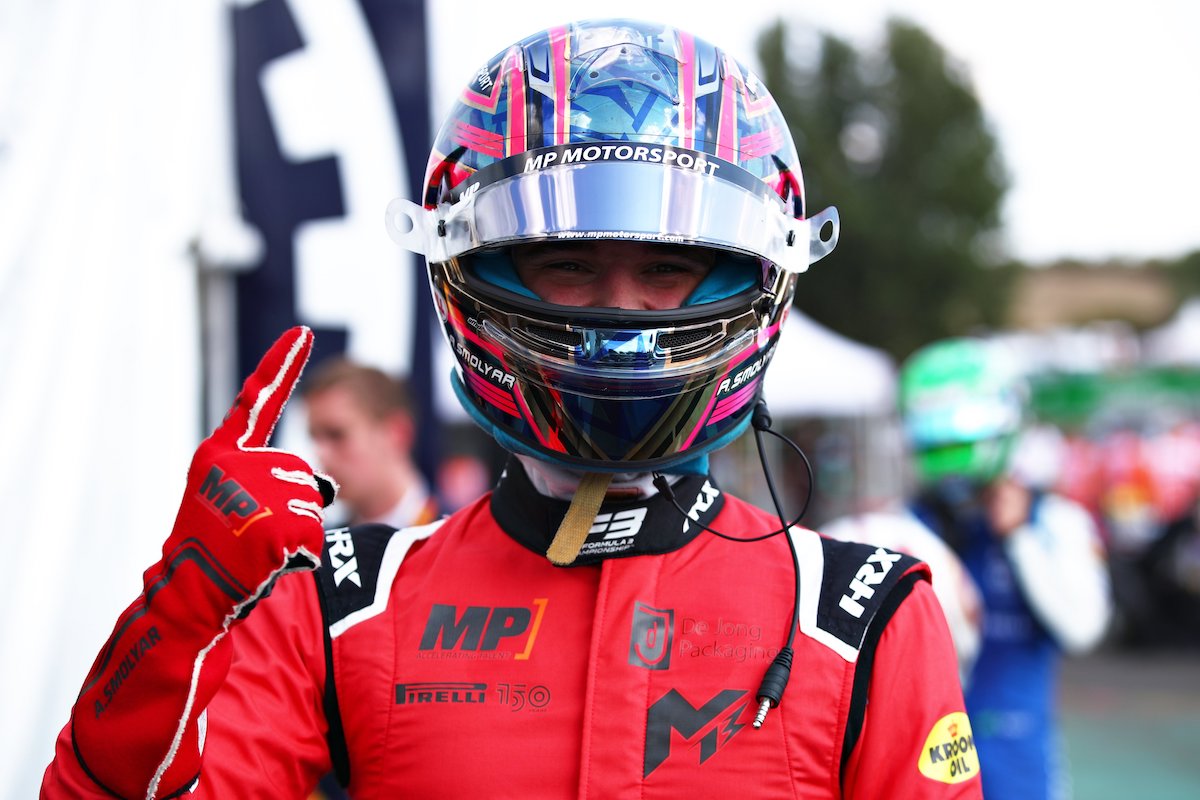 MP Motorsport’s Alexander Smolyar took his first FIA Formula 3 Championship victory in over a year with a commanding performance in the Hungaroring feature race.

The race started on a wet track, and with the whole 30-car field on grooved tyres. Most had wheelspin off the line, and poleman Smolyar immediately cut to the inside to fend off Zane Maloney and Ollie Bearman.

His tight turn-in down to turn one meant he drifted wide at the exit as he returned to the throttle, right in the path of Maloney. That allowed Bearman to take the outside line for turn two but with little grip he ran wide and went back into third behind the front row starters.

Jonny Edgar and Pepe Marti then got in a squabble at turn two that forced several drivers to go off in avoidance, and the pair fell to the back of the field as they than had to pit, with Marti picking up a five-second penalty shortly after too.

After heading back uphill to the drier middle sector, Smolyar started to race away and had a three-second lead within two laps. That grew to five seconds after five laps, before Smolyar and those behind started looking for wet patches on the track to cool their tyres.

The gap was managed through the rest of the race, and Smolyar claimed his first win since 2021’s opening Paul Ricard sprint race by a margin of 5.56 seconds.

Maloney had Bearman in his mirrors the whole race and managed to hold him off in a photo finish for his maiden F3 podium.

Jak Crawford moved into fourth on lap one and sat comfortably in that position until the final laps when he charged onto the rear of Prema team-mate Bearman but couldn’t find a way through on what was now a dry track. He then dropped to fifth on the last lap, as Carlin’s slick-shod Zak O’Sullivan came by after pitting mid-race.

Juan Manuel Correa, another of the pitters, beat Kush Maini to sixth, while Arthur Leclerc was fastest as the track was drying and finished eighth after an early battle with David Vidales, who made up eight places on lap one.

Vidales would go on to struggle with his tyres and fell out of the points but still ahead of Reece Ushijima, who also passed eight drivers on lap one and ran in the top 10 before fading to 14th as drivers at the back of the field pitted for slicks and stormed up the order.

Victor Martins fell to 10th as he was passed by slick-shod runners, but draws level with Isack Hadjar at the top of the championship as he struggled to 18th.