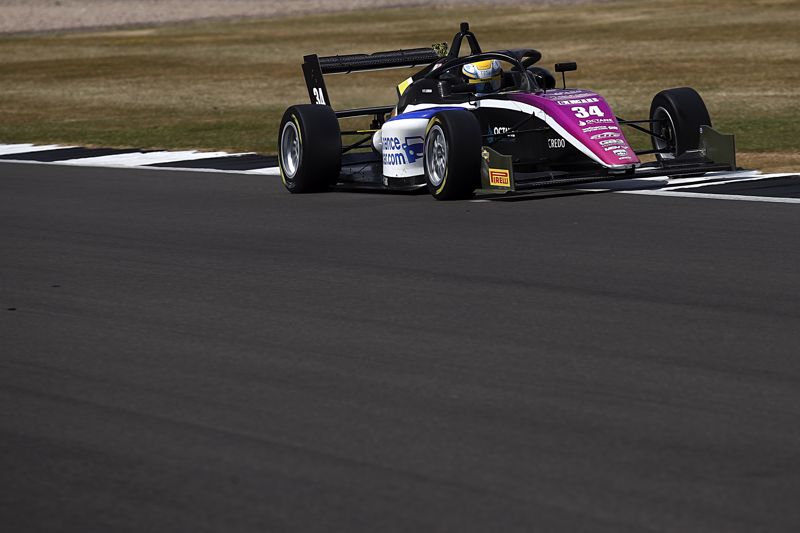 Lebbon made the better start from the inside of the front row to move ahead of Voisin into Copse, with Fortec Motorsports’ Joel Granfors also sweeping past the Carlin driver into Maggotts to take second.

Voisin then lost a further place to team-mate Javier Sagrera before the safety car was deployed at the end of the opening lap after Chris Dittmann Racing’s McKenzy Cresswell retired with rear-left suspension damage in an incident at Village.

The race resumed on lap four, with Voisin quickly dispatching Sagrera for third at Stowe. At the start of the next lap, Voisin nipped inside Granfors at Maggots to steal second before reeling Lebbon for the lead.

Lebbon resisted a final-lap challenge from Voisin into Village, but as the cars moved onto the Wellington Straight, Voisin clipped the rear of Lebbon’s car and lost his front wing.

Lebbon held on to win, despite suffering a rear-right puncture, as Voisin edged Granfors to second at the chequered flag.

Sagera was less than a second back in fourth, with team-mate Roberto Faria and JHR Development’s Matthew Rees coming home close behind.

Arden’s Nico Christodoulou was seventh ahead of Elite’s John Bennett, who lost three places on the opening lap.

Luke Browning repeated his race one performance by surging from the back of the field to 11th on the opening lap, where he remained until the finish. The result means Granfors moves ahead of the Hitech driver to the top of the standings.