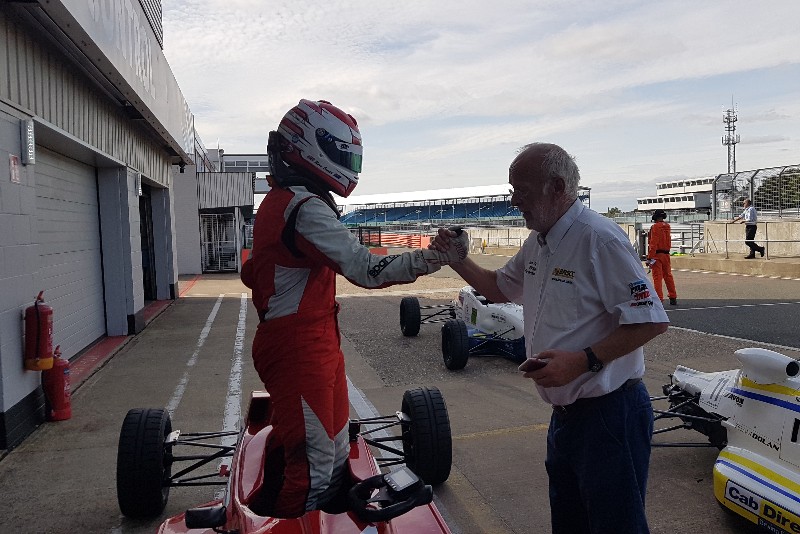 B-M Racing’s Tom McArthur started the race from pole, with team-mate Smith alongside him on the front row.

Martin was in the lead before the end of the first lap, with a four-wide entry into Brooklands resulting in the two B-M drivers conceding position while Martin and Michael Moyers took to the front.

Smith reclaimed second from Kevin Mills Racing’s Moyers on lap two, then took the lead around the outside of Brooklands a lap later, seconds before team-mate McArthur collided with Jonathan Browne and race two winner Joey Foster.

Cliff Dempsey Racing driver Browne was out on the spot, while McArthur was briefly airborne as he rode over the top of him and managed to stop his car safely off track. Foster trudged back to pitlane, as a safety car was brought out to clear Browne’s car.

The top two nailed the restart, with Moyers and KMR team-mate Michael Eastwell not far behind.

These two groups of cars then ran in tandem for the rest of the extended 18-lap race, with Martin getting close enough once to brush his nosebox on the leader.

The end margin between the two was 0.483 seconds, with Moyers and Eastwell split by a similar margin in third and fourth.

Swift Cooper’s Thomas Capezzone had risen from 10th on the grid to run a lonely fifth until the last few laps, where he was passed by CDR’s Spike Kohlbecker.

While fifth place ensured the National title fight continues to the Brands Hatch season finale, finishing behind Martin meant it was the Team Dolan driver who secured the Triple Crown title.

By beating his team-mate John Svensson to class victory, it means Svensson has to wait until Brands Hatch to secure the title.