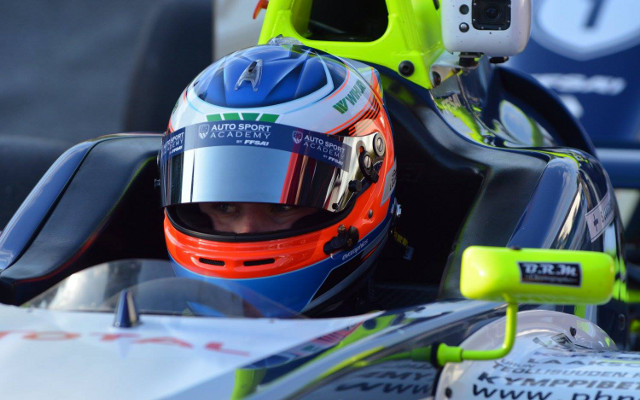 Finnish racer Simo Laaksonen scored his maiden French F4 victory in a scrappy race two at Magny-Cours, as the championship’s top three all failed to finish.

Laaksonen had made his 35th start in the series from fifth on the reverse grid, as Michael Benyahia led from pole ahead of Louis Gachot, who passed slow-starting debutant Jean-Baptiste Mela off the line.

Axel Matus got past Gachot later on the opening lap, with Laaksonen following him through on lap two.

On lap three, Benyahia was taken out of the lead by contact from Matus, and Laaksonen emerged out front, going on to claim victory by a final margin of four seconds.

Matus crossed the line second, but was later given a 20-second penalty for the clash with Benyahia, dropping him to eighth.

Behind Laaksonen and Matus, Gachot was running third until being passed at the penultimate corner by Gabriel Aubry.

Gachot attempted to re-challenge his rival into the chicane but contact was made, putting Aubry out of the race and dropping Gachot down the order.

That promoted Kami Laliberte to a maiden podium finish from seventh on the grid, and he inherited second with Matus’ penalty.

While championship leader and race one winner Valentin Moineault was eliminated by contact on lap three, his nearest rival Sacha Fenestraz was up to fourth on lap 7 of 12 but he soon slowed and retired with a broken oil sump.

With the top three now all out, the next best-placed driver Giulano Alesi came through to fifth behind Reuben Kressner and Julien Andlauer.

Julien Darras came from the back of the grid after his race one non-finish to take sixth, followed by Mela.

Behind Matus, the top 10 was completed by Gachot and Antoine Robert, who beat fellow debutant Alex Sedgwick after the Briton served a drive-through penalty for jumping the start.