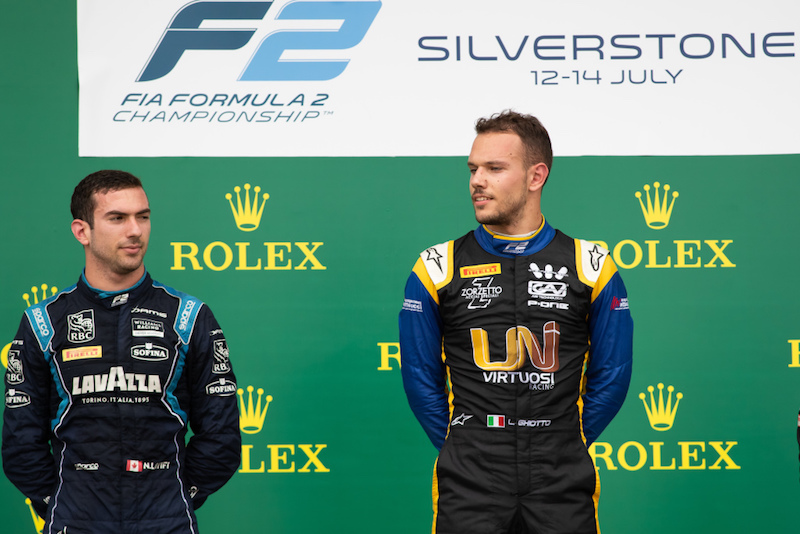 Luca Ghiotto and Nicholas Latifi say their battle for victory in the Silverstone Formula 2 feature doesn?t change their outlook on the title race, despite making up ground on Nyck de Vries.

Ghiotto and Latifi finished first and second in the Silverstone race while de Vries was only sixth. That reduced Ghiotto?s deficit to the championship-leading de Vries from 55 to 38 points, and Latifi?s gap from 37 to 27.

Virtuosi driver Ghiotto, whose win followed two second-places at the last round in Austria off the back of four consecutive non-scores, said his gap to de Vries was still significant.

?It doesn?t change much, the gap is still big,? Ghiotto said when asked by Formula Scout if the result helped the pair to believe that they can still win the championship.

?I just want to take all races as a single race, do the best result I can at that moment, and let?s see. I?ll do the maths in Abu Dhabi.?

Latifi was more upbeat, but said he would expect de Vries to gain ground again in Sunday?s sprint race, which he will start from third on the reversed grid.

?Even for me, the gap is still big to Nyck, but for sure it?s nice to close back a bit the gap,? the DAMS driver said.

?The weekend?s not done yet so now he starts from the front and normally race twos are quite processional and he should claw back a bit of that.

?It?s still very very early in the championship. I had quite a big lead at one point and then it goes away in one race, and then it becomes an enormous lead for him in another race. That?s kind of the ebb and flow of the season, it can be very up and down.

?All it can take is one very good weekend for me and one terrible weekend for him and the lead is gone, and vice versa, it can go the other way.?

Fourth place in the race for Sergio Sette Camara was enough to drop him behind Ghiotto to fourth in the championship by just one point, despite gaining two additional points by setting the fastest lap.