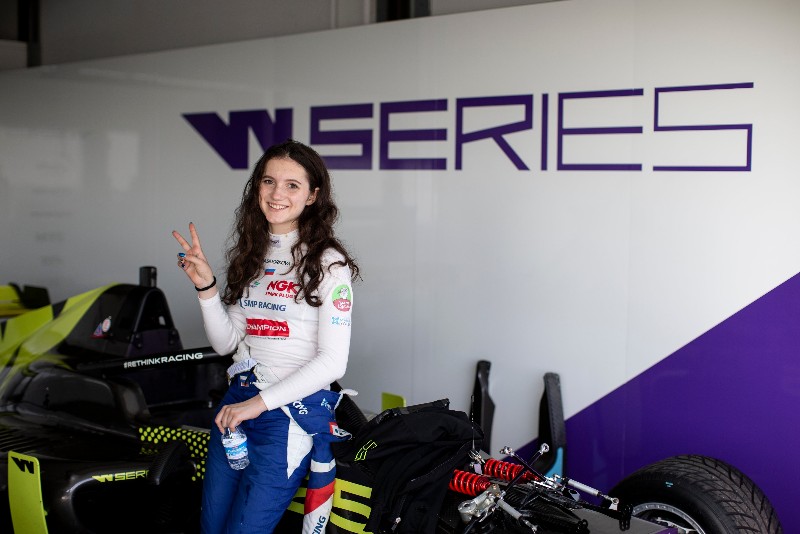 Caitlin Wood took pole position for the first race but was passed by Visser, who was on the clean side starting from second, on the run to Paddock Hill Bend at the start of the 15-minute race.

Wood then spun off on the GP loop later on the opening tour, leaving Alice Powell in pursuit.

However, Visser was able to open up a small gap to Powell to secure her fifth league win. Powell held off Marta Garcia for second, ahead of Nerea Marti and Sarah Moore. Wood was able to recover to eighth after dropping well out of the top 10.

The reversed grid for race two put Miki Koyama on pole, but she was jumped by Sidorkova – who had a difficult opening race – at the start.

Lap one was marred by a huge accident at Graham Hill Bend that involved a few big names including Garcia and Moore. Title contenders Powell and Visser escaped without significant damage – and both were up into the top 10 by the end of the first lap.

Sidorkova opened up a substantial lead to Koyama. Sabre Cook then took second at the halfway point of the race, while Visser was also charging up the field.

Visser then took second in the closing stages but was over 10 seconds behind Sidorkova. Cook took her first podium with third, ahead of Pepper and Hawkins.

Wood was seventh behind Abbie Eaton, while Emma Kimilainen salvaged ninth after being caught up in the first lap mayhem. Koyama slipped out of the top 10 due to a couple of late errors.

Visser took pole for the 20-minute feature race but was jumped by Garcia at the start. Sidorkova was able to hang with the pair but Wood – who held fourth – dropped slightly back.

The leading trio went three-wide halfway through, with Sidorkova jumping Visser. They then engaged in a battle that lasted several laps, with the pair changing position several times in the closing stages. Garcia was generally able to pull out a gap while the pair behind battled, but they then moved past her with just a few laps to go.

Visser crashed out with two laps to go while chasing Sidorkova, leaving the 16-year old to take her second successive win ahead of Garcia. Despite the substantial damage, Visser was able to finish fourth and extend her points lead.

Wood – who had a quiet race – rounded out the podium with Pepper and Moore fifth and sixth. An exciting scrap over seventh concluded when Naomi Schiff went airborne. The position was taken by Fabienne Wohlwend.

After disconnecting from iRacing during qualifying and therefore not setting a time, Powell took ninth after working her way up to that spot after just two laps. Koyama also missed the final race after hardware issues.